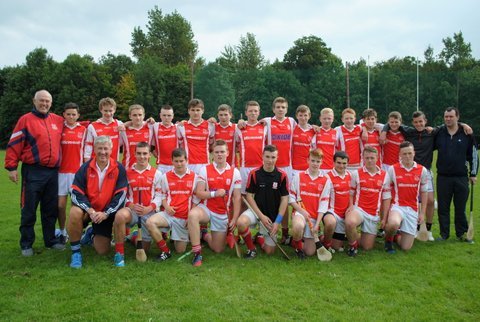 St. Vincents arrived early. They looked eager and ready for business resplendent in their light blue tops and new gear-bags. Burke was playing 12 and they had speed at 11, 14 and 15. Cuala had a plan. Burke is a fine hurler and, given space and time, he can hit his speedy inside forwards. And they can cause damage. The game-plan: close down his space, park a bus in front of the inside line and take your chances up front. The plan worked!  But the Cuala players were magnificent. Their collective determination and their discipline to implement a complicated plan was exceptional. The Band of Brothers came of age today and quite rightly earned their place in the top 4 of hurling’s elite in Dublin.

Footnote: Congratulations to both 16A and 16B hurling teams & mentors who have both made it to Championship semi-finals.

Next up: Saturday 20th September Cuala play Championship semi-final against Ballyboden who saw off the Kilmacud Crokes challenge by 8 points but only after a scoring blitz at the end of their game. Na Fianna and St. Brigids pair off in the other semi after seeing off the challenges of Clontarf and Faughs respectively.