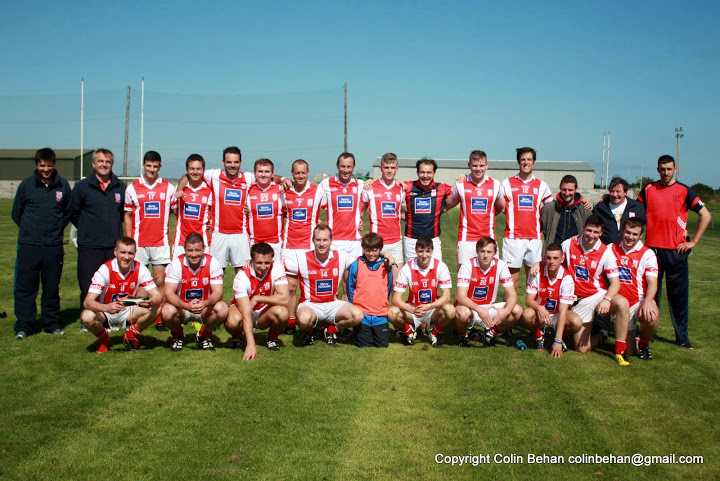 After a layoff of 5 weeks, the Cuala AFL9 footballers resumed league action knowing a win would secure them the Division 9 title. In near perfect conditions captain Gary Widger elected to play against the wind and the hill and Cuala had the dream start when Eoin Hackett brilliantly fielded a high ball and finished calmly to the net in the first attack of the game. This settled Cuala nicely as they began to exert their influence on the game and they didn’t have to wait long for their second goal when Cillian Greene pounced to flick the ball to the net after a dangerous delivery from Hackett. A shell shocked Maurs attempted to regain a foot holding in the game but with some hard running from Cillian Bass and neat interplay between Keith Keogh and Matty Higgins Cuala were able to extend their lead with some accurate point taking. When Maurs did threaten Cuala defended well with Jack Behan, Ronan Murdock and Daragh Lyons dominant.

As the half closed out there were 2 more goals, first Cillian Greene surged through the Maur’s defence and crashed a low shot to the Maurs net, and then with the last play of the first Maurs finally breached Cuala rear-guard and finished a flowing move with a well taken goal.

Now with the elements Cuala went about their second half business in clinical fashion. Early points from Aaron O’Rourke and Cillian Greene extended the lead and with the midfield sector being dominated by Big Arni, Shane and Gary Cuala picked of the points to put the game to bed.

Frees from Matty Higgins and a 45 from the superb Cillian Green put a fine gloss on the score and with substitutes Conor O’Sullivan and Greg Egan combining well to set up Alan McCarthy for a lovely left foot score, there was even time for centre back Ronan Murdock to kick his second point of the year much to the delight of a scrumdiddlys bound Maor uisce Shane Hayes. Cuala have now won 13 from 13 league games and Sundays win puts them in an unassailable position in the league, their remaining games are AIB ( Sep 21 )and Geraldine Morans, both at home. Well done to the team and management for securing promotion to AFL 8.

Fogra: Excellent display from Shane Kelly making his first start for the AFL 9 team, Shane hardly put a foot wrong and was a constant driving force in the middle third. Nick Cosgrave was unlucky to miss the game through injury but showed his utter commitment to the team travelling out and encouraging all throughout the game.

Fogra eile: Great to see Greg Egan back after a long layoff from injury, hopefully Greg can get a good run injury free now, we missed his pace and composed defending.