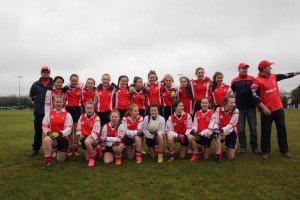 Div. 3 girls were drawn against Fingallians, Skerries Harps and O’Tooles in Group B of Div.3. The team’s coaching ticket envisaged a hard fought league section with both Fingallians and O’Tooles dropping from Div.2 in U.14 League to participate in Feile. The day commenced bright and early at St Peregrines grounds in Clonsilla with the team and supporters gathering from 9am onwards. Our girls looked a picture in their new Cuala ensembles. While the forecast was poor, the group had strong optimism and a mood of great enthusiasm.

Game 1: First up were Fingallians. The Cuala line-up was comprised of a 19 girl panel following an unfortunate late withdrawal by Mia Kelly who was laid up in her sickbed. Right from the off, our girls got stuck in playing some lovely football featuring many of the lessons imparted by Barry Burke and the coaching team in the weeks prior to the competition. Assisted by a gentle sloping field and an encouraging tail breeze, our midfield and forwards combined well to put 1-5 on the scoreboard by half-time with inspirational running from deep midfield time and again. Our defence and gaolie gave not an inch keeping Fingallians scoreless. Facing into the 2nd half, we knew Fingallians would come back aggressively now playing with the downhill and breeze advantage. However, our defence was immaculate and Ella gave a master class in goalkeeping prowess pulling off some wonderful saves. Resolute defending from our rear trio time and again turned defence into attack in a matter of swift passes leading to us staying ahead to finish out winning 2-5 : 0-3 by the conclusion.

Game 2: Skerries Harps were our next opponents who had earlier recorded a win against O’Tooles in their first game of the day. Once again we were straight out of the blocks playing some great passing football and taking scoring chances as they fell with skill and composure. From one to fifteen the girls displayed savage hunger for possession and were quick to up the ante in terms of passing and interplay. This led to a number of opportunities to put up some great long and short range points to establish a 0-4 : 0-0 lead at the break. Turning around and now playing up the hill and into the wind, we knew that Skerries would put it up to us. The full panel of girls dug in and went up a gear to put a further 1-4 on the board, featuring a wonderful meandering run from midfield topped off by a rocket drive to the roof of the net. Once again our defence held fast to keep Skerries scoreless and resulted in us finishing out 1-8 : 0-0 winners of the game. We were through to the semi’s!!!!

Game 3: Knowing that table-topping semi-final qualification was secured, we took the opportunity of resting some weary legs and mixed up the combinations against a resolute O’Tooles team who we knew would be set on achieving the elusive win for their outfit. A tight cagey game ensued with every ball hard fought resulting in us trailing at half-time by 1-0 : 1-3. Taking up the hill and breeze in the second half, the girls played more composed football and intelligent play led to us outscoring our opponents leaving us oh so close at the end, just pipped by the narrowest margin. Final score 2-4 : 3-0

Semi-Final: Our opponents, Garristown, were runner-up in Group A having won 2 of their 3 league games. The game was played out on what could kindly be called a sticky surface making ball bouncing a lottery action. Within minutes, great movement and passing from our frontline saw us take the first score over the bar. However, Garristown quickly got into their stride and took an early point chance but were denied anything more meaningful by strong defending. A strong midfield and half forward pairing were proving threatening and following a fantastic point blank goal save, an unfortunate rebound led to a goal being conceded. Not to be outdone, the Cuala girls upped their game and soon afterwards were rewarded with a net busting goal to put us right back in the hunt. Approaching half time, it was nip and tuck on level scores and a fantastic top-right corner fingertip save tipped the ball over for concession of a point. So by half-time, we were very much in the game only a point down on a 1-1 : 1-2 score line. The second half was nail-biting with little quarter conceded by either side. Scores were at a premium with little to no time on the ball afforded. Unfortunately, in the end time ran out for Cuala having come achingly close to lose by a single point, 1-2 : 1-3. It was literally a case of a kick of a ball. The girls gave their all in pursuit of their Feile dream and were a great credit to the club and it bodes well for the future of Ladies Football in Cuala.

In Sunday’s Final, Garristown turned the tables on Trinity Gaels from their league stages game and won Div.3 Feile 4-6 : 2-3.

Thanks to all involved both on the day and in the lead up: Mentors, GPO, Sponsors, First-Aiders, Comms, Fund raisers, Gear Co-ordinators,Umpires, Sub-Co-Ordinator, Sandwich-makers, Match-watcher, Tent-erectors (the ladies !!), Parents all, Grandparents, Rellies and all fellow Cuala members who came to support. 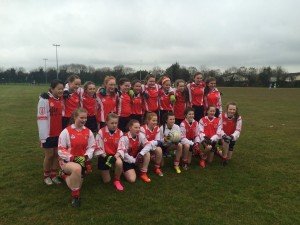