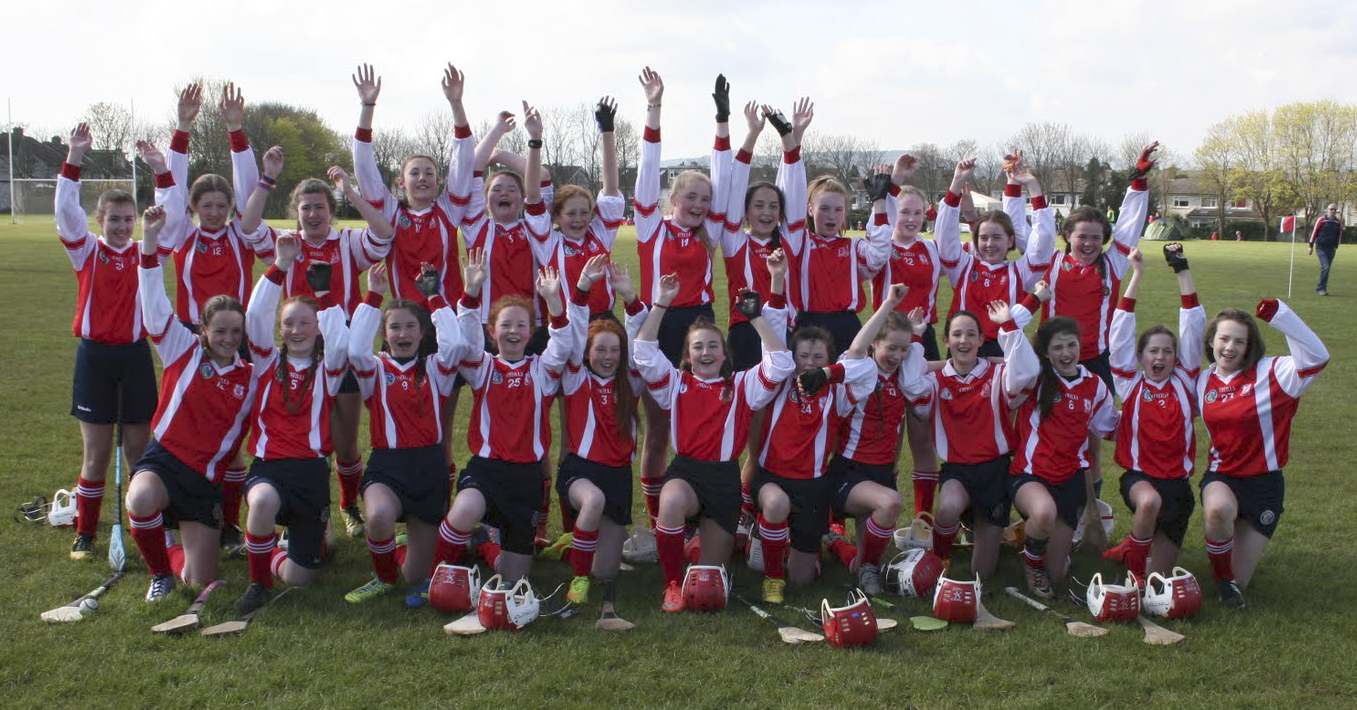 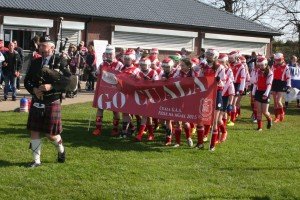 Cuala 2002 girls hosted this year’s Division 2 Camogie Féile in Thomastown Park. Seven teams arrived to do battle on Saturday 23.04.2016. The weather was kind, the draw less so. Cuala were drawn in group A to face familiar foes Castleknock and Naomh Bríd, and for their first outing against Whitehall Colmcille. Commercials, Naomh Mearnóg and St. Vincent’s were drawn in group B.

First up for Cuala were Castleknock.  Since we beat them by the narrowest of margins in the U13B Championship Final last September, Castleknock won all of their League matches including an 8-point victory against Cuala. Castleknock played like a team with a score to settle and started quickly. Their ferocity was evident and their first touch was excellent. The Cuala girls battled bravely, but were shaken by the concession of a few goals. Cuala rallied for a 10 minute period in the second half, but Castleknock ultimately pulled away and ran out convincing winners. Castleknock 8-02 Cuala 0-2

The Cuala girls re-grouped for their second match against Whitehall Colmcille. This was a nervy encounter as Whitehall had lost their first match to Naomh Bríd, so a win was crucial for both teams. Both teams battled hard. Though Cuala dominated proceedings in the first half, they fell behind. Despite the pressure, they held their nerve when it counted – Cara Bourke with a catch and earned a free. Great point by Kate Kirkwood.  Superbly taken goal by Méadhbh Ní Fheinneadha.  The winning score came courtesy of a great hand-pass by Jill Slowey to Mia Kelly who took a magnificent point from distance that seemed to take forever to come down. Squeaked home by the tightest of margins to set up a show-down with Naomh Bríd.  Cuala 1-02 Whitehall Colmcille 1-01.

Naomh Bríd had won our recent League encounter by 6 points. They had a win against Whitehall and a loss to Castleknock in their first two matches, so the final macth was finely poised as a “winner takes all” battle for a place in the semi-finals. The battles were frantic and Brigid’s took the lead. Magnificent save on the double from great effort by Meadhbh and follow-up by Sarah. Great saves by Ciara Whelan kept us in the hunt. Tough battle, kept going right to the end, but it wasn’t to be. Naomh Bríd 1-03 Cuala 0-2

The girls did really well against the odds. They faced the two teams who ultimately contested the Div 2 Feile final (Castleknock and Naomh Bríd, Castleknock ultimately running out winners against their near neighbours). The girls were all disappointed with the results, but that is the nature of sport – you win some and you lose some. However, there was no questioning their commitment – their attendance at training was fantastic and the effort and spirit they all displayed on the day was a credit to themselves, their parents, their mentors and their club. They remain a cohesive, chatty, enthusiastic, spirited and at times unhinged group. And as always, it was a pleasure and a privilege to manage them. We will re-group for the remainder of the League and we’ll be waiting in the long grass come the Championship.

Massive thanks due to:
The Club – for their support; in particular players and mentors from the adult ladies and juvenile girls section.
Jenny Drummond and the 2003’s who organised the whole affair and had the facilities in great shape
Fundraising and organising gear – Anna Whelan, Berry Brophy, Mary Sheridan, Sharon Slowey, Deborah Byrne, Jenny Kirkwood, Karen O’Connor, Siobhan Doyle, Jaci Power.
First aid – Mary Sheridan, Róisín Sullivan
Sponsors – T. Bourke (David Bourke), Georgian Townhouse Group (Pádraig Ó Feinneadha) and McMahon O’Connor Residential (Kieran O’Connor)
All parents who contributed – bagpacking , sandwiches, cakes, lifts and tweets
David Bourke – photography
Barry Burke –deserves special mention who, despite being fired early on for being a footballer , tireless work above and beyond the call of duty for both the Camogie and Football Féile.

The Rise and Shine walk
Scroll to top