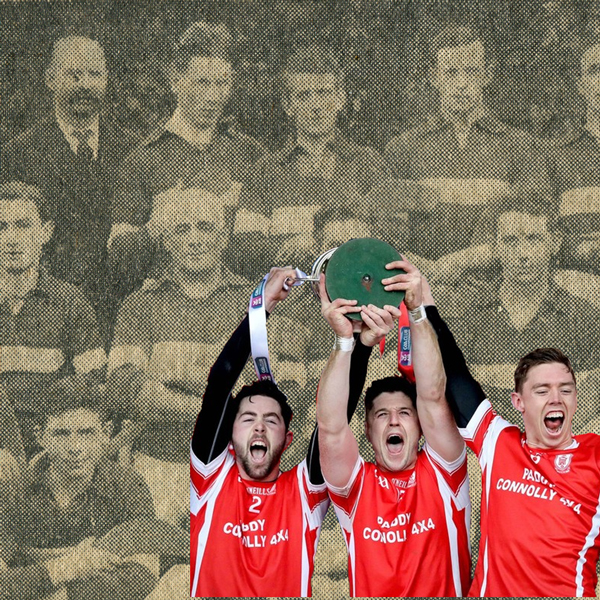 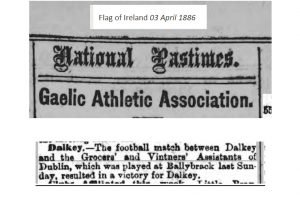 It is known that there were organised contests involving local players from Dun Laoghaire & Dalkey as far back as the late 1800’s.  For example, the earliest recorded Bray Emmets team played Dalkey in the Vevay in 1885. A football team from Dalkey hosted the (Dublin city) Grocers & Vintners Assistants at Ballybrack in 1886. Ashford GAAs history recalls their playing a team from Dalkey in the same year – one of the first games in the Garden County played under GAA rules.  We know Dunleary footballers and hurlers were among 15,000 players who participated in a “monster tournament” in Thurles on Easter Sunday 1886. Also in ’86, we have a record of a Dalkey football side travelling to a tournament in Kilkenny.

Besides Dalkey, there were many GAA Clubs operating in the late 19th and early 20th Century throughout the area – these included ’98 Shamrocks (Hurling) Dunleary O’Connells (Football), Glasthule Mitchells (Football), United Gaels (Football) and Dunleary/Kingstown Commercials (Football). 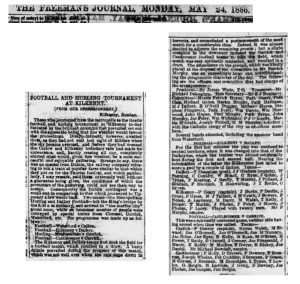 formal “Cuala” story can be traced from Cuala Hurling Club (Dalkey, 1918) through a variety of mergers, off-shoots, ‘rests’ and resurrections involving clubs like Naomh Mhuire Camogie Club (Sallynoggin, 1948) St Begnet’s GAA Club (Dalkey 1959, renamed Dalkey Mitchell’s in 1962), Roger Casements (Dalkey 1966) and Cuala Boys (Dun Laoghaire, 1962). All of these clubs were part of the great Cuala journey – their history and that of the modern club are inseparable.

Cuala took its name from the “Cuala Marian League” – a schoolboy league covering south Dublin and North Wicklow  and from an ancestral “Cuala Hurling Club” both of which were named for that ancient area of land which comprised much of South Co. Dublin and North Co. Wicklow stretching from Dalkey to the Sugarloaf.   There is ample evidence that the use of the term “Cuala” was promoted by Conradh na Gaelige (Gaelic League) whos regional organisation (also covering branches in North Wicklow and South Dublin) was called Ceantair Cuala and whos members were also instrumental in the formation of local teams and competitions.

Their practice ground was located at the lower Quarry on Dalkey Hill and the “Firm” Quarry.

Both Paddy Darcy and Charlie Somers took part in the 1916 Rising and were interned in England. We know from official records, that a “P.Darcy” from Woodside, Dalkey was transferred to Stafford on 8th May 1916 in the company of a large contingent (#203) from Wexford, mostly Enniscorthy – the makings of a hurling fraternity perhaps? A further #58 from Athenry, on 13th May, adds to the theory of what the main sporting interest might have been. Add to this the fact that the Somers family appear to have had Waterford roots (His mother Ellen (nee Walshe) and sister Elizabeth were born in Waterford. Though “Daniel Charles” (to give him in proper name) was born in Cork so the hurling DNA is beyond doubt.

Paddy Darcy was, in 1916, an 18 year-old living at 16, Ardbrugh Road the second youngest of 6 children of a Wexford man Abraham Darcy. Abraham was a retired Dublin Metropolitan Policeman. His mother was Elizabeth Darcy.

After their release in 1918, they formed the Cuala team.

Following the outbreak of the War of Independence, Charlie Somers was arrested, in 1920, and received a 10-year term of imprisonment in Dartmoor. The Somers family ran a Post Office in Tubbermore Avenue. When the Post Mistress, Mary Walshe, (his maternal aunt) died, Charlie was released on parole for her funeral and while in Dalkey, he played a match for Cuala. Shortly afterwards, a number of arrests followed and Cuala became inoperable as most of the team members were in jail.

The cuala Hurlers strugged on in the early 1920s,  using the grounds at the “Firm” Quarry off Dalkey Avenue but due to emigration and lack of players, the team died-out in the late twenties. It  was reformed again in the early thirties when young players became available.  A Team that played in the Twenties/Thirties was as follows –

A team photograph with relatives of current Cuala players still survives. And so, Gaelic Games remained somewhat unorganised in Dalkey until the late 40’s when they began to attract renewed interest.

St Mary’s Camogie Club was founded in 1948. It was based in Sallynoggin but initially played its matches in the Phoenix Park. In 1972 the Club “associated” with Cuala Casements and later on, with an enlarged Cuala/Mitchells setup.  But it wasn’t until 1978 that the club formally amalgamated with what had become  Cuala Hurling & Football Club.  The enlarged club adopted its present name Cuala Hurling, Football and Camogie Club.

More than 12 players have played for Dublin and Leinster. A Cuala player has also captained the county team. (Cartlan Digiteach Cuala would like to hear full details please)

St. Begnets G.A.A. Club, known to be active in 1917, was, it seems, re-launched in July 1959. Football teams from Minor down completed in the Cuala Marian League.

What is now Hyde Park G.A.A. pitch was dissected by a wall, and a soccer pitch was sited on the lower half of the field. A Junior Football section was formed in 1959. Access to Hyde Park was achieved in 1961 when U-13 and Junior Hurling matches were played. In 1962, Dun Laoghaire Borough Council voted to remove the wall at Hyde Park and it was demolished over a year later revealing the pitch as it is today

In August 1962 it was decided to change the club name to Dalkey Mitchell’s. The name was probably influenced by an earlier team called Glasthule Mitchels that were active in the late 1800s. The name, in common with many other clubs, was adopted in honour of  the Irish nationalist activist, author, and political journalist.John Mitchel (1815- 1875). Famously banished to Van Diemens Land (Tasmania) when he published his widely read “Jail Journal”, local lore had it that his last sighting of Ireland was of Dalkey. Although he sailed as a prisoner from Kingstown to Spike Island and mentioned sighting of Bray Head and Vale of Shanganagh, there is no mention of  any sightings of Dalkey.

In 1962, the J.H.L. Division C was won. This was the first adult competition ever won by a local club in County Board competitions. At least two men associated with this team (who) are still active in Cuala today. In 1964 work commenced on the dressing rooms in Hyde Park. 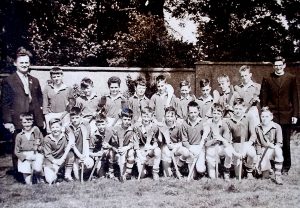 In a meeting in the Town Hall in Dun Laoghaire February 1962, Cuala Boys GAA Club was founded under the Chairmanship of Richard Curran. This was a development grounded in the Cuala Marian League, a competition run for schools in south Dublin & north Wicklow. Members of Cuala Boys were drawn mainly from Dun Laoghaire C.B.S.  But they also benefited from the disbandment of two neighbouring clubs – St Michael’s and Dun Laoghaire Commercials whos boys were amalgamated into the new club. They competed  at U11 & U13, when they proved too strong for the local opposition. Their colours were blue with a white collar. The first set of jerseys were bought with the proceeds of a raffle, the prizes being a transistor radio (none of your MP3s or iPhones in them days!) , a ladies or gents bicycle and a quarter ton of coal. Tickets were 3d. each or five for a shilling. Most homes in Sallynogging subscribed.

Roger Casement’s were formed in 1966 to cater for minors emerging from both Dalkey Mitchell’s and Cuala Boys. The club name was undoubtedly influenced by fact that the remains of Roger Casement were repatriated to Ireland the previous year for re-interrment in Arbour Hill. Many ceremonies were observed on that occasion including gatherings at his birthplace in Sandycove. At the time, Mitchell’s presented this new club with “twelve hurls as a gesture of goodwill”. They wore red and white and were based in Glasthule. By 1967 the boys had made it to a M.H.C. Final but were beaten by Air Corps (they flew young in those days). As often happens with amalgamations, it seems players from one of the constituent clubs, Cuala Boys emerged as the dominant group. Meanwhile, Dalkey Mitchell’s soldiered-on sucessfully, but the last reported activity of the Roger Casements Committee was on 21 June 1967 and it seems they found it difficult to sustain themselves. Time for further re-organisation!

In September 1967 Cuala Boys and Roger Casements provisionally amalgamated to become Cuala Casements Hurling & Football Club. The first meeting was attended by D. Curren (V.Chair), J. Robinson (Chair), M.Priest, P. Tracy, T. Holden, L. Owens, J. Canny (Asst.Sec), F Sullivan, B. Lambkin, J. Mooney, J.Reilly, P. Mohan, M McCauley and M. Dunphy (Sec).  Red and White became the predominant colours. The merger was formalised at an Annual General Meeting held in December. At this time, the Cuala Bingo began in the Empire (later Astoria) Hall, Glasthule, (later to become Club Caroline, then the Forum Cinema – sadly now closed). It later moved to the Assembly Hall in Dun Laoghaire. For years it was the main source of income for the club. That same year the U.15 Hurling Championship was won and the Sallynoggin Pavilion, built by the parents of the players, was opened in September.

A newspaper report from 1969 states that there was “no shortage of players…however it is difficult to get suitable, competent officials to look after all the teams and generally it is the same four or five”. A unique treble was also achieved in 1969 with the U.15, U.16 and U.18 Hurling Championships. It was “a hell of a run”. Sallynoggin was the only hurling pitch available to the club at this time. The club fielded “a bit of a Junior Hurling team”. 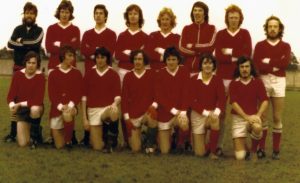 The years 1970-72 also saw three U.21 Hurling Championship finals in a row being lost. In 1971 the Warwickshire Juvenile Board visited Cuala with a party of 30 players. Summer Leagues were organised in which the “the organisers wish to emphasise that this competition takes second place to events such as Scout outings, Cubs Altar Boys etc”. 1972 saw the J.H.C won by the club for the first time with a 3-10 to 0-11 victory over St. Vincents. It has been won three more times since then. The J.H.L was also won that year. Bingo was in the Top Hat in Dun Laoghaire. At this time the club adopted a policy of dealing with hurling exclusively until the players were 14 years old. Its also clear that from at least 1973, Cuala Casements had begun referring to itself as, just, Cuala.

Following agreement reached at its AGM on 13 Nov 1974, Cuala Casements amalgamated with Dalkey Mitchells to form Cuala Hurling & Football Club (a revised Constitution was agreed at a Special General Meeting held on 24 Mar 1976). Also in 1976, the I.H.C. was won restoring the club to the Senior ranks (previously achieved by Mitchell’s in ’69). This was the year in which the Hall on Hyde Road in Dalkey was bought for £24,000 from the dormant Dalkey Boxing Club. The hall had been built by local initiative, each house in the area paying for one brick.

In 1978 the Club as we know know it took shape when the St Mary’s Camogie Club formally merged with their Dalkey neighbours.  This marked a milestone in the  club journey and the beginning of a period of growth and development including the opening of the Social Centre (1985), our first Senior Hurling Titles (1987 & 1989)  Hyde Road pitch redevelopment (1989) and our third Senior Hurling Title (1991)

“Who Do You Think You Are?” – a Historical Timeline