1962 was a pivotal year in Ireland and in the World generally.  50 years ago, we were beginning to see immense changes in social and cultural lives.  We saw the very first Late Late Show and witnessed the birth of the Dubliners and the Chieftans.  It was the year of the Second Vatican Council and the communications revolution had begun with the launch of modern communications satellites – a fact celebrated that year with a chart topping “Telstar” by the Tornados.  Some things remained the same though.  Kerry won the Football and Tipp’ won the Hurling in what was first All-Ireland final to be broadcast live by Teilifis Eireann

Back on earth in Dalkey, 1962 was a pivotal year in the history of Cuala.  There were 2 strategic developments in the local GAA world – developments that were the critical foundations of our modern day club.

St Begnetts GAA Club was re-named Dalkey Mitchells and began plans to develop facilities in Hyde Road. (It’s very likely that the “Mitchells” title was chosen because there had been a team of that name (honoring the patriot John Mitchell) operating in the Glasthule/Glenageary area in the late 18and early 1900s but had become defunct). Dalkey Mitchells were to later release their Minors to another new club Roger Casements

Also in 1962, in Dun Laoghaire, a new boys club was founded drawing on pupils from CBS Dun Laoghaire and a recently disbanded club, St Michael’s of Sallynoggin. The new Club adopted the name Cuala Boys.  It was named after the Cuala Marian League (1953 – 1967, and whos officers included Seosamh Ó Drisceoil and Prionsias Ó Maolain). And it also resurrecting the name previously used by Cuala Hurling Club based in Dalkey since about 1918.

Having collaborated in setting up Roger Casements (1966), Cuala Boys & ‘Casements later fully-amalgamated as  Cuala Casements in 1967. By 1971, discussions were well advanced on an amalgamation between Dalkey Mitchels and Cuala Casements. In the meantime, Cuala Casements became informally associated with  Naomh Mhuire Camogie from 1972.  In 1974, Dalkey Mitchels and Cuala Casements merged to form Cuala Hurling & Football Club and retained their informal “association” with Naomh Mhuire.  Then, in 1979, Naobh Mhuire was formally accepted into Cuala as a new Section – thus bringing together Camogie, Hurling & Football under a single Cuala ‘roof’ and giving us the great club we know today. 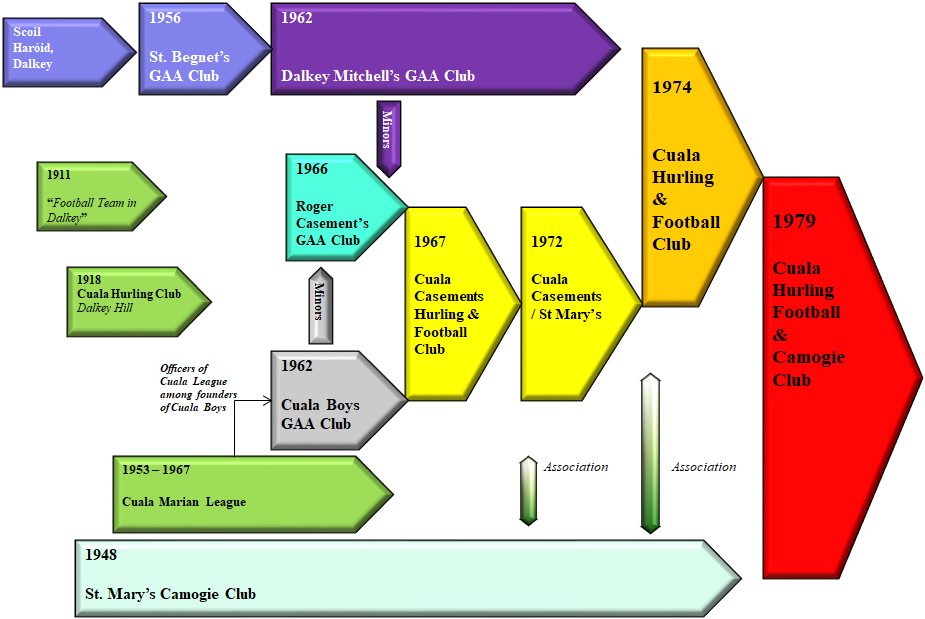