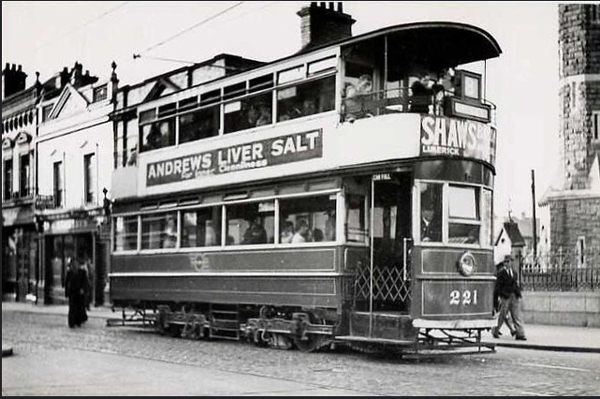 Cartlann Digiteach Cuala  occasionally likes to look over our historical fence to better understand what our neighbours were up to back in the day. We, like many others, would have shared a belief that there was not much going on in the locality during the war years but Comhar Cualann caught our eye. It existed in the decade prior to the founding of St Begnetts GAA (1958) and just a few years before Naomh Mhuire (1948). The familiar name is also fascinating being rooted in the same ancient area that previously influenced Cuala Hurling Club (1920s) and later Cuala Boys (1962)

Comhar Cualann was founded in early 1945 and was run by people living around Dun Laoghaire. Although it was short-lived, it seems to have been active until at least 1947. It organised a hectic schedule of club activities. As the name suggests it’s major aim was the promotion of Irish language and culture but it adopted a much broader scope of interests than those traditionally associated with a typical G.A.A Club and it had “branches” across the metropolis including Bray, Rathmines, Rathgar & Terenure.

Among its activites could be found not only Football, Hurling & Camogie, but Boxing, Tug of War, Table Tennis, Hiking, First Aid, Cycling, Physical Training, Ballroom Dancing and a Soccer team. Also listed were the Comhar Players (Drama, sketches, Variety shows) and a popular weekly “Social” in Dun Laoghaire Town Hall which sometimes included celebrity guests. Crowds flocked to see Dublin celebs like crooners Frankie Blowers and Jerry Kestell, Jack Cruise (of Olympia pantomime fame), and tenor Martin Crosbie (brother of Paddy “School-Around-the-Corner” Crosbie). Jazz pianist Peggy Dell was a promised attendee. Comhar Cualann even had its own Band and seem to offer a wide variety of styles from Ceili to danceband. They practiced in the Coastguard Station in Dun Laoghaire.

Comhar Cualann had no connection with the Bray-based Cor Cualann Musical Society. Nor does it seem to have any association with Comhar Chumann Cualann, a parental co-operative that ran Colaiste Cualann in Clarinda Park in the 1960s

In keeping with its primary objectives, it ran Irish dance classes and language lessons and promoted the speaking of Irish.

Comhar Cualann played Soccer in Div 3 of the Athletic Union League using pitches in Ballybrack, Glasthule and Newtownpark (Bradmola Factory); players included Davenport, Coyle, Kelby & Dunne. It played Hurling & Football in the Patrick Moran grounds on Newtownpark Avenue and while they on the record of intending to affiliate with the Dublin County Board in Dec 1946, it is not clear whether they ever did (or could, given the extensive range of their sporting interests).

It seemed particularly strong in Camogie where, by 1946, it ran two successful teams and had expectations of developing a third. They trained in Sallynoggin and included M.Davis, N. Byrne, R.Davis, A.Stapleton, G.Durnin, P.Somers, M.Kelly, M Abby, U.Shelly , T.Kilbride, M.Byrne and D Knowles. Maybe some of these players were soon-to-be-new-members of Naomh Mhuire founded just 2 years later?

Was Comhar Cualann a “club” in the conventional sense or might it be better described as some sort of an enabling framework for a wider programme of community activities? From 1947, there was no further mention of this remarkable organisation in the media. We have no idea how long after it survived or whether its ambitious programme of interests eventually wore it down? There is nothing available to us to suggest anyone associated with Comhar Cualann had a later role in founding St Begnets, Naomh Mhuire or any more recent clubs. If anyone knows otherwise or can offer any further information about this short-lived “club, we’d like to hear from you. 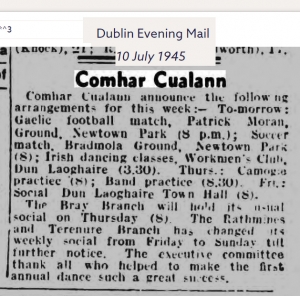 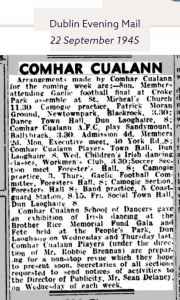 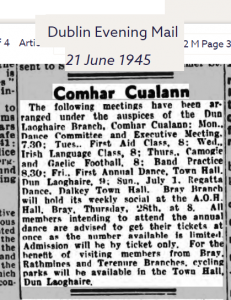 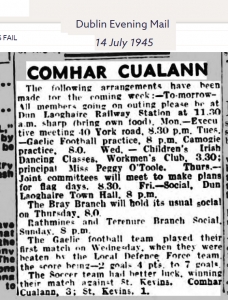 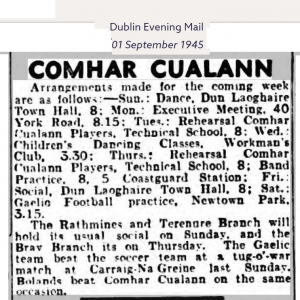 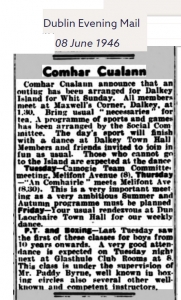 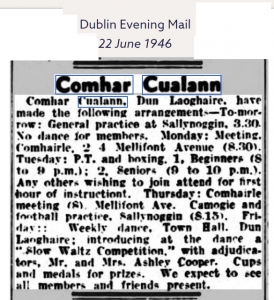 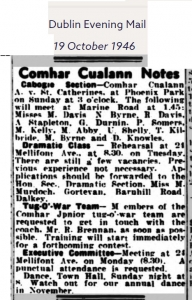