We’ve said it before in these pages, Cartlann Digiteach Cuala loves attics. And when the attic in question belongs to a former Chairman who played a major role in developing one of Cuala’s most important facilities, we know we’re in for a treat. So we were delighted to hear from Tommy Johnson (Chairman 1987-1989) who has shared with us his many interesting notes and images from this important period. 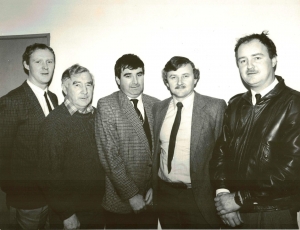 One of the core club assets which many might take for granted lies in plain sight every time you visit Cuala HQ. But few may realise the huge effort it took to make it what it is today – the Cuala pitch. In a week which saw the first Senior Football Championship fixture taking place in Hyde Park, its almost unbelievable to think that, being once the site of allotments, it was once a much smaller, sloping site that would surely been very frustrating to play on. Today, it is a full sized level pitch which plays host to a range of club activities throughout the year. Tommy rightly believes it’s important that current members appreciate the great efforts made by those club officials of yesteryear and he makes special mention of our current President as well as Con and Mick Browner Shay Carroll & Maurice Johnson. In fact, the project to develop the pitch was actually supported by two key Committees –

A Fund Raising Committee (Des Cahill, Maurice Johnson, Brendan Ryan RIP, Tom Cullen) was set up, 2000 tickets were sold in record time to raise the 36k. A further 15k was sourced in lottery/DLCorp grants. An earlier scheme, whereby members made loans to develop the bar, was extended by inviting participants to convert the loans into 12-year membership subscriptions. There was a tremendous response, 75% of the scheme participants took up the offer. 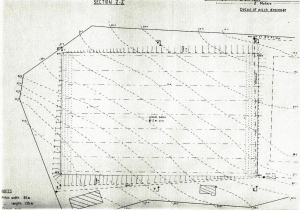 A Development Committee was set up (Tommy Johnson, Maurice Johnson , Con Browner (RIP), Johnny Sheanon, Shay Carroll) It was a great bonus that these five were very knowledgeable and experienced in construction matters. This Committee commissioned Michael Browner, a Civil Engineer, to survey the field and produce a proposal which involved lowering by 2.5 metres in the top corner and filling by 1.5 metres in the bottom corner. As these images portray, a huge amount of rock breaking and “cut & fill” was necessary to rectify the huge slope on the original site. Con took a keen interest in the project right through and acted as unofficial “Site Engineer” throughout, looking after his son’s design. In the end, the project was delivered for approx. 33k.

Needless to say, the opening of the pitches in December 1989 was marked with great ceremony.  We’ll post details of that great day shortly. 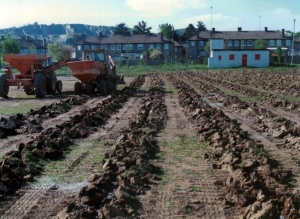 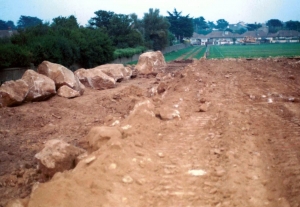 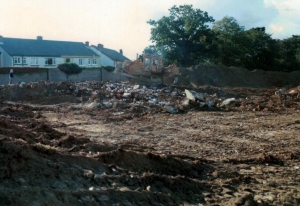 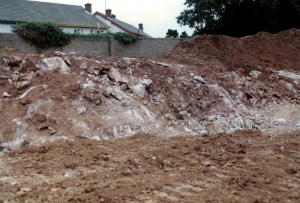 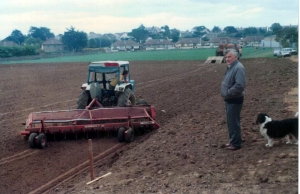