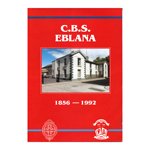 Cartlann Digiteach Cuala is mindful of the great support Cuala and its ancestral clubs received from local schools. All the more so when some of those schools, like CBS Eblana in Dún Laoghaire is no longer with us. So we were thrilled when Joe McCann showed us a copy of  “St Michaels CBS 1856 – 1992″ a souvenir publication to mark the closing of that great institution in 1992 and packed with stories and images of their many achievements in the classroom and playing field.  We re-produce here one of the many articles –

I joined the staff of Eblana in September 1968, having Br. Holly as Superior. I had heard of the great work being done at Primary level by Br. McGovern and Br. Considine, as I had been invited to join Cuala Casements the previous year by Tom Holden, Johnny Robinson and the late Joe Ryan.

During my first year in C.B.S. there was only one Senior Football team in the school, run by Br. Brett, Sean O’Leary and Con Walsh. Players in that team who come to mind were PJ. Holden, Vinnie Holden, Malachy Kearns, Lorcan O’Reilly, Noel Tymlin, Kevin Halligan, Paul Hearns and Derek Mohan.

With the arrival of Br. O’Brien, we organised U/14, U/15, U/17 teams in both hurling and football. In 1970 we won the U/17B Hurling league. This was our first hurling team from the secondary school and was powered mainly by the Holden brothers, Vinnie and Michael, Terry Dunne, Paul Delahunty, Michael Brady. Patrick Dolphin played in goals and Thomas Johnson was sub. Our U/17 football team, almost the same as the hurling team, was beaten in the final of U/17B football league. The highlight of this final, for me, was the agility, skill and goal scoring ability of Noel Mooney, while the young Michael Holden showed all the signs of things to come. We won the U/15 football in 1971, with players such as Tom Johnson, John Phoenix, John Basquille, Joe Conway, Brian O’Toole, Michael Delahunty, Kevin O’Connor, Jerry Hanny, Willie Chadwick and Pat Warren. Jerry Hanny excelled at centre back. 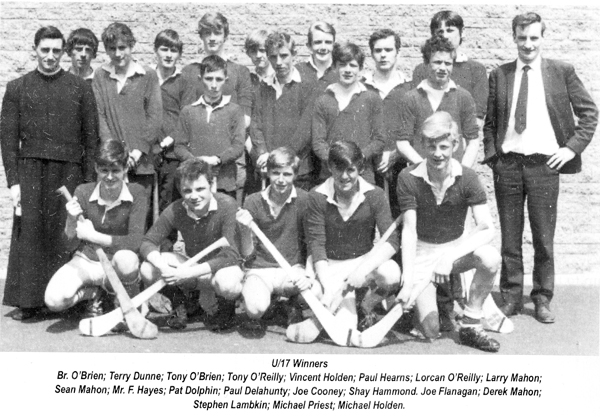 The next few years brought few victories but produced great players such as Matt and Joe Hayes, Teddy O’Connor, Paul and Tommy Robinson, Philip and Martin Searls, Liam Dunphy, Pat Duffy, Aidan Ffrench, Karl Schutte, Mick Dixon, Dave and Pat Errity, and Christy Smith.
During these years Br. Madigan showed great commitment to the games. Jim O’Driscoll and Benny Roe then lent their support to hurling and football (Jim being a former Co. Cork minor hurler). In 1976, Captained by Mick Kirwan, we won the U/15 Hurling in Croke Park, and in 1977 we won the U/16 Hurling league. This was mainly the same team with exceptional players such as Damian Byrne, Mick Kirwan, Robbie McLoughlin, Martin O-Sullivan, David (Whitey) Whyte, David (Red) White and Kevin O’Connor. In football we failed to make the final stages of the competition. In 1978, mainly under the guidance of Jim O’Driscoll, we won the U/14 league but were subsequently defeated in the Leinster final by New Ross with the “Super Subs”. The team had very good players in J.RByfne, David Archibold, Martin Wallace, Martin Kelly and Michael McDonnell. 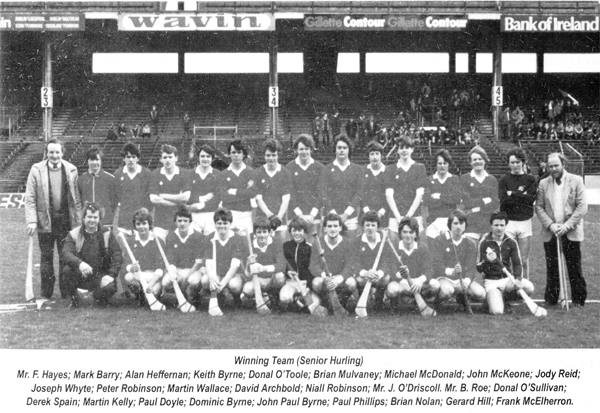 The core of this team remained on to do the Leaving Cert, and it was to my great delight that J.P. Byrne captained the team to an U/17 victory in Croke Park. It looked like an easy victory early in the first half but the opposition introduced a “Super Sub” and we found ourselves behind at half time. But due Jc in inspired second half by J.P. Byrne, Jody Reid, Brian Mulvanney, Michael McDonnell, John Robinson, Niall Robinson, “Killer Hiller”(Ger Hill) and especially David Archibold, Derek Spain, Damian Byrne and Martin Wallace, the day was ours.
The last hurling team was in 1987 with Denis Byrne as captain and great club players like Noel and Martin Byrne, Adam Howlin, Gary Doyle, Sean Connolly, Sean Hayes, Decian McNamara, Jim Schutte, Liam Rooney, Darren Carroll, Gary Confry, Gary O’Leary and Michael Dunphy. Br. John Hearne was a staunch supporter, both in training and at matches, and behind the wheel of the minibus. This was not surprising as Br. John was playing full back for Cuala at this time.
Due to declining numbers, football teams were not entered into competition at this stage. Benny Roe had been “looking after” a soccer team in ’86/’87, with great players such as Graham Smith, Graham O’Sullivan and Alan Kearney. Then Br. Brennan came and saw the potential of a Gaelic team between the G.A.A. players and the Soccer players. He forged a memorable victory against a fancied Marian side and indeed, the remainder of the team were only beaten by one point in the same league the following year. A truly remarkable achievement by a very dedicated and highly respected Br. Brennan.

No small word of thanks is due to Br.McEvoy, who over the last ten years provided the encouragement, transport and finance for the games despite falling numbers. Teams were often treated to Burgers and Chips regardless of the result on the way home from matches – greatly appreciated by all.

It was a delight for me to be with the first winning Eblana hurling team and to have been associated with the various teams throughout the years, but rather sad to see it come to an end. I recall the players who “made” it to the top – P.J., Vincent and Michael Holden, Michael Kirwan, Damien Byrne, – have all worn the Dublin hurling jersey with great pride, and Michael’s greatest hours must have been with the “Dubs” in the All Ireland ‘Dirty Dozen’ Football final. Damian Byrne is now the present goalkeeper for Dublin Senior and indeed has served with distinction. John Cahill is now inter-county referee and David Hudson, Tom Byrne, Martin Wallace, Mick Kirwan, J.P. Byrne and Tom Johnson have played for Dublin Minors. Denis Byrne, Karl Schutte, Damian Byrne, Michael Kirwan played U/21 for Dublin Minors. All of the above have won Minor, U/21, Intermediate and Senior Hurling Championship medals with Cuala. From the football side, The Holden brothers, Tommy Johnson, Eamon Brennan, John Sheanon, Michael Sheanon, Paul Keogh, Paul O’Brien, Shay Carroll have won Minor, Junior and Intermediate football medals with Cuala.
“What comes clown goes around” is an old saying that has much meaning for the “lads” of Eblana. PJ. Holden is training an U/14 hurling and football team, Ken Fitzgerald and myself train the U/15 side, which includes PJ/s son Tommy and John Cahill’s son Simon. Vinnie trains the younger age group from 6-8 years. Damian Byrne, Fergus Campbell, Liam O’Toole, John Sheanon, Michael Sheanon, Tom Johnson, Shay Carroll, Liam Dunphy are all involved in under age training and coaching. Indeed the Cuala ‘Coiste’ often looks like ‘roll call’ at Eblana. Most of the above were the main driving force in the development of the Cuala Centre and playing pitch. 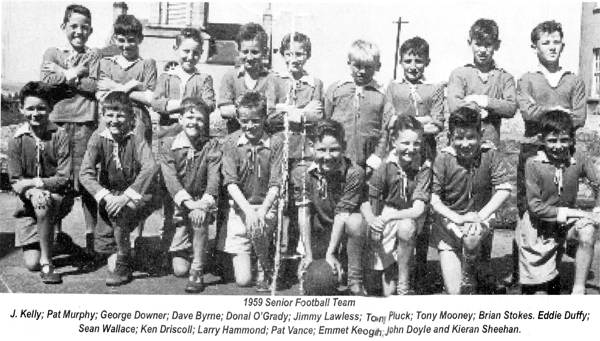 I know it is dangerous to single out any individual, but I think that “Dayo” deserves special mention. He seems to train, and be present at most under age games, play and train for Cuala and Dublin, coaches players in local National schools in hurling and football, and is a ‘taxi’ service for young players to training sessions and matches.

Recently, Ger Byrne, Eoin Devlin, Ruari Devlin have qualified as Junior Referees and are in action almost every weekend in South Dublin.

I have enjoyed the last 23 years in Eblana and indeed the people I came to know over that time – parents, students, teachers, teachers in other schools, especially Paddy Flanagan, Enda Carolan, Jack Ryan, and the late Colm Muldoon – all have greatly enriched my life. Go raibh maith agaibh go leir.