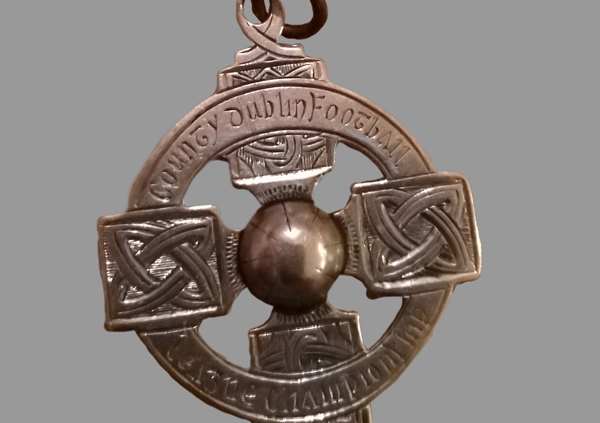 Dunleary O’Connells  is another of those Clubs whos very existence has been largely forgotten. Although not known to have any direct connection with the modern Cuala club, Cartlann Digiteach Cuala feels this forum is a fitting place to record what is known of this once powerful club in what has since become the Cuala heartland. 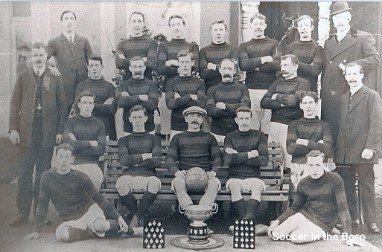 Our attention was drawn to O’Connells by Ray Logan who kindly shared an image of a Dublin medal that belonged to one of the team – Lawrence “Lanzy” O’Brien. It was awarded to the winners of the Dublin Junior League in 1910-11. At that time, O’Brien was most likely the Longford-born assistant in Doran’s Vintners in 106 Upper Georges street. Today, the spot is occupied by AIB though older readers, familiar with the pre-shopping centre town, may remember it as “The Glenbournie”.

Lanzy may well have excelled in his duties at his Kingstown place of work but we now know he was also a talented footballer with a medal to prove it. This can only have been good for his relationship with the boss Michael Doran who, when he wasn’t attending to the refreshment of the local populace, was a prominent officer of Daniel O’Connell’s Gaelic Football Club. The Club Secretary, Malachy Doyle worked next door in Liptons as a grocers assistant, living over the shop.

The club officers were –

The club was formed in 1909 and had a meteoric rise in Junior Football winning the 1910-11 League and, in the following year, playing Senior Championship Football. Kitted out in Black & Scarlett, their success on the field was remarkable; by December 1910, they has accumulated 30 goals & 118 points out of just 11 matches, a feat attested in writing by Lorcan O’Toole (Sec. to Dublin Board) who also confirmed that this was a record that stood from the formation of the League in May 1901. By all accounts, the O’Connells enjoyed significant support in the town. General Meetings could attract up to 150 attendees and it seems their games were well supported. The club were in the habit of arranging special trams for away matches. The spectators at home games were sometimes entertained by a local band.  Their home games were played in Mr Field’s field on Monkstown Avenue (present-day Sailors & Soldiers Field) and at “Adelaide Road” which was actually the modern (former Pres.) grounds at Glasthule. 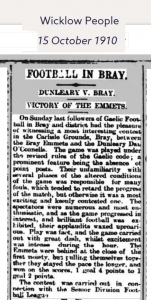 History Makers
Few will now realise that in its early days, Gaelic Football had “points posts” as well as goalposts – much like Aussie Rules today. The outer points posts were discarded at the start of the 20th century. At the Carlisle Grounds in Bray in 1910, Bray Emmetts entertained O’Connells in a game – their first to be undertaken under the revised rules.

Accurate to a Tee
It was matters off the pitch which attracted most media attention to O’Connells. The club held regular meetings at their “rooms” at 55 Mulgrave Street to which the press were customarily invited. During one of these meetings, in April 1910, opinions were expressed (seemingly by Doran) as to how much favoritism was shown by the Dublin Football League committee and how they were prone to arrange fixtures involving long trips by O’Connell’s to the far reaches of Dublin ( Drumcondra, Rialto, Marino etc). The feeling was expressed that the League was more interested in gate revenue and had its “pet” clubs.  And it would seem that certain members of the League committee were prone to disparaging the reputation of the O’Connell’s team, much to the annoyance of the Dunleary faithful. These strong opinions had hardly left the lips of Doran when they appeared in the columns of the Wicklow People and in due course landed on the desk of the Secretary of the Football League.

The inevitable task of defending the club fell to Board Delegate Michael J. Cooke, a “provisions assistant and accountant” from Blackrock. Back in the day, it was customary for “visitors” to accompany club delegates to meetings where they could not vote but were often prone to voice their comments. One can only imagine the tensions. As far as the character of the team was concerned, Cooke was careful to emphasise that “we had to make it a rule of the club to keep out a certain undesirable class of whom there have been too many, even in our own time, to bring disgrace upon the Gaelic Athletic Association” Cooke was well-versed in the dynamics of the League Committee and already had considerable experience in this regard. For example, he had previously defended the O’Connells from a charge of fielding “un-constituted” players in a fixture against St Sylvester’s. The Malahide objection accused O’Connells of fielding players (Reilly, Moran, White. Matthews) in the Junior competition who had previously turned-out for Glasthule Mitchells in an Intermediate contest. Cooke skillfully argued that the Northsiders’ objection was not, as the rules demanded, lodged “in duplicate”. He demonstrated that the second copy was not an exact duplicate but a poorly constructed hand-written copy which spelled “Intermediate” as “Intermedi-T-ate”. Much to the amusement/consternation of the many spectators present, the Malahide objection was ruled inadmissible and Cooke received a hero’s reception at the next club meeting.

Cad is ainm duit?
The most notable member of the club was a John Woods of Brighton Vale, Monkstown who was an up-and-coming solicitor and a prominent Irish Language activist. He was well-connected to the GAA too, his aunt Margaret was married to Michael Cusack. John adopted the Irish form of his name at an early age and eventually formally changed it to the Irish version by Deed Poll. But he didn’t stop there – he even went so far as to change the name of his adopted town.  Admitted as an O’Connell’s member in 1910, Seaghan O’Huadhaigh later became a member of Kingstown Urban Council and played a leading role in having the name of the Council area changed to Dún Laoghaire.

Railed against Authority
By April 1911, the O’Connells were playing in the Senior Championship Football at Jones’ Road against Kickhams. More trouble ensued. A disputed sending-off of a Dunleary player was exacerbated by a fellow player leaving the field in protest and then returning to encourage his teammates to retire. When this did not achieve his aims, he kicked the match ball over the railings.  Game to Kickhams!

Aftermath
What became of Dunleary O’Connells after this remains a mystery. The last newspaper sighting of them was in July 1911 at the Greystones Tournament where they played Bray Emmett’s. While morale within the club ought have been very strong, it might be speculated that their relationship with County officials was far from ideal. Perhaps life simply got more difficult for them organizationally. Whatever the reason, we can find no trace of officers or players in GAA affairs in the immediate area beyond this time.  Malachy Doyle went on to captain Bray Emmett’s before taking up the whistle and eventually became Secretary to the Dublin Football League Committee and a member of the Dublin County Board. Cartlann Digiteach Cuala also noticed some familiar O’Connells names cropping up in Bray Emmets in 1912 – e.g. Hanny, Richfield, D. Reilly. Another sign that their Dunleary outfit was no more. 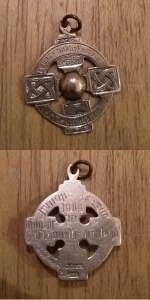 Players and members associated with the Dunleary O’Connells were –

Team picture courtesy of Joe Dodd; Soccer in the Borough

Cartlann Digiteach Cuala (Cuala Digital Archive) was established in 2009 to assemble an on-line archive of images, stories and memorabilia relating to Cuala its ‘ancestral’ clubs and stories of historic clubs from the area.
If you have any information or material to share with us, please contact –
Michael Goodwin, +353 (0) 87 2266140,  history@cualagaa.ie
Contributors can be assured that all material will be kept safe, treated with care and returned promptly.

Congratulations to our All Ireland Champions of 2020
Scroll to top