Cartlann Digiteach Cuala is of the view that we should never overlook great hurling endeavours by Cuala members that take place beyond the jurisdiction of club and County.
And so we’re grateful to Colin Behan (again) who spotted a familiar face in this team picture of the victorious UCD team that lifted the Fitzgibbon Cup in 1993.  We reproduce here an account of the final (from the UCD site). Although our shy and retiring future Academy Chairman, Colmán O Drisceoil did not feature in that report, we’re assured he certainly made is presence felt on the field of play is that epic final 20 years ago. 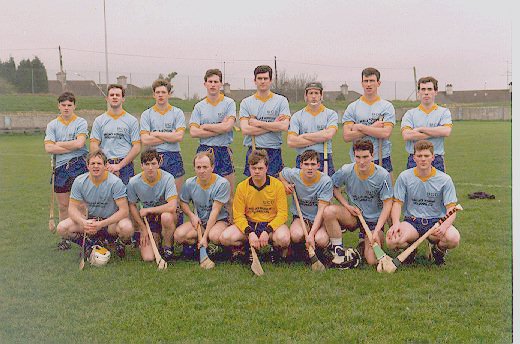 Epic 1993 Final
The 80’s was a quiet decade for the college with UCC dominating proceedings in the inter-varsity competitions. In 1993 however this was all to change when UCD booked their place in the Fitzgibbon final against UCC, after defeating UL in a very lack lustre semi-final in Waterford.
On the Sunday morning of the 1993 final an extract from a piece by Kevin Cashman said that “UCD were a team stuck in third gear and were lambs to the slaughter against a very fancied UCC side bidding to regain their Fitzgibbon grasp.”  UCD however had different ideas with the team being captained by Jim Byrne of Wexford and included players of the calibre of Johnny Pilkington (Offaly), Brendan Carroll (Tipperary), Andy Dunne (Laois), Eamonn Scanlon, Seamus Hughes (Wexford) and Dan O Neill (Kilkenny).
UCD pushed the match to extra time with a last ten minute brace of points. They emerged in extra time with Jim Byrne playing a captain’s role and leading by example scoring a marvelous 2-10 of UCD’s tally for the day. The final score in a remarkable final was UCD 2-21 UCC 4-14.
UCD had bridged a 14 year gap and hope was revitalised of new things to come as most of the team were around for the following year, however they failed to UL in waterlogged conditions in Galway.
Sce: http://www.ucd.ie/gaa/hurling/history/
The Fitzgibbon Cup competition is the premier hurling championship among higher education institutions. The trophy is named after Dr. Edwin Fitzgibbon,  a professor of philosophy at University College Cork who, in 1912, donated most of his salary to purchase the trophy.