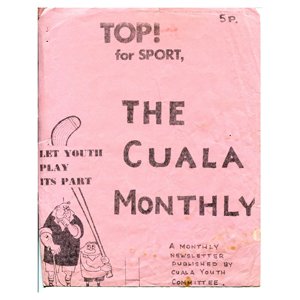 Every so often Cartlann Digiteach Cuala  is presented with a gem. Our latest contribution is just that and comes from an extensive set of papers and memorabilia kindly loaned by PJ Holden.

Long before computers were commonplace, much less the Internet or Facebook or even our beloved Cuala Weekly News, there was a popular club magazine in circulation in the club. And one that you had to pay for too!

The Cuala Monthly (“Top for Sport“) was produced in 1971 /72 by the Cuala Youth Committee and it make for fantastic reading today if only to show how much things have changed (like magazine production, Bingo in the Top Hat, dancing in the Shangri-La) and how much things have stayed the same (a club dealing with ‘phenomenal growth” and exploring how best to organise itself for the challenges that lie ahead).

And we have an entertaining 20-year gaze into a 1972 Crystal Ball to speculate how the future – 1992 – might look from the point of view of an Optimist – and a Pessimist. You’ll love it!

An article featuring press coverage on a change in dress code in Dublin Camogie smacks of being authored on Craggy Island.

We wonder might the Institute of Quantity Surveyors in Ireland may have a thing or two to say about a young Cuala man’s apparent disdain for favouring Office blocks over Club development.

Lots of team reports and lists of names of great players. Where are they all now?

All in all – evidence of a vibrant club scene where issue were skilfully aired and discussed and the youth of the day standing up to be heard.

You can read our “first” magazine here The Cuala Monthly April 1972 (pdf 2.7MB). More to follow in the coming weeks.