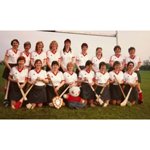 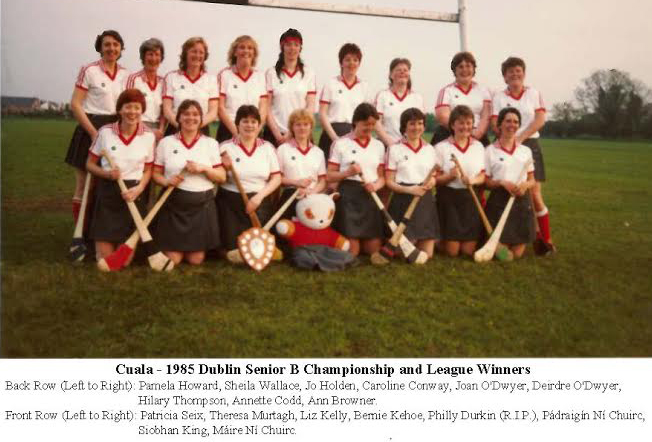 Máire Uí Scolaí has reminded Cartlann Digiteach Cuala of an important anniversary on the Club Calendar. Its just over 30 years since the great Senior Camogie team of 1985 brought great distinction to the club –

1985, is remembered fondly by Cuala Camogie as the year when they won the Senior B Championship and League Double. While this has not been achieved since last year 2015 was a cause for much celebration when the Adult team won the Division 5 championship defeating Naomh Brid in a great encounter.

Back in 1985, on a glorious sunny evening the Cuala girls under the management of John Bailey travelled out to Naomh Brid’s grounds in Blanchardstown to take on another Southside club, UCD. A tough match, it was the Dalkey club who were victorious on the night. Much celebrations were held in the old Cliff Castle Hotel. However, the season was not over and the girls were not happy until the double was secured. This time to take the League double it was a trip to the Phoenix Park to take on the Cameron Park club from the northside. This club is no longer. Another tight game in the end it was the Dalkey dames who took the League title. Simply the best feeling that night for the panel of 17 players. Back then the game was played on a 12 a-side basis with a smaller field. Much changes since then!!

Many of that 1985 panel went on to play for Dublin and also take on major roles in administration at National Level. That year, both goalkeeper Hillary Thompson and Máire Uí Scolaí( nee Ní Chuirc) were both in Galway, Hillary was studying hotel catering, while Máire was working there. Both girls caught the 3 pm train on many afternoons and duly arrived on time for all games, and make the long journey back the following day. When you are winning, the journey seems less! Jo Holden played both senior and junior for the Dubs. Prior to 1985, both Pamela Howard and Sheila Wallace played for the Dubs, Sheila captaining the senior side in 1976. Sheila,a great defender won a junior All-Ireland medal in 1971 when they defeated Cork. Sheila was a selector when Dublin won the O’Duffy Cup in 1984. Pamela won a junior All-Ireland medal with the Dubs in 1975 when they denied Down victory. Bernie Kehoe (nee Brack also played for the Dubs).Caroline Conway’s sister Bernie who played for Cuala at one stage and also won a senior All-Ireland medal in 1984.

The following year, 1986 Sheila Wallace took on the position of Ardrunaí of Cumann Camógaíchta na nGael in Croke Park. Sheila held that position until a number of years when she retired. Prior to her retirement the title changed to Ardstiurthóír. Today the Association is called An Cumann Camógaíochta. So many changes! Sheila, a brilliant administrator made many changes while in the position and was there in centenary year 2004.

Another player from that 1985 panel to make it to National Level was Máire Uí Scolaí, who like Sheila served first at Dublin county board level, Máire went to become National PRO in 2000, a voluntary position which she held with distinction until a few years ago when she retired and was then asked to take on a new role – National Results CO -Ordinator. Máire took the position for another couple of years until she finally retired in 2008. Máire’s sister, Páiricín went to a more dangerous sport, that of world wide mountaineering – Páiricín was 200 metres from the top of Mount Everest in 2006, probably the highest any Cuala person has achieved??. She still climbs today.
Caroline Conway like Jo Holden emigrated to New York where they both played camogie, Jo returned to live in Galway while Caroline remained in New York and then went on to play Gaelic Football.

Many of that 1985 team remained playing and many years later won a junior title. Some are now seen on the sidelines cheering on the present generation. We must not forget one player from that panel who is no longer with us, that is Philly Durkin who sadly passed away at a young age some years ago. Philly played at junior level for Dublin at one stage. May she rest in peace.

A victory of such magnitude would not have been achieved if it wasn’t for the hard work of Dalkey Man John Bailey. Many thanks John. John refereed the 1986 All Ireland hurling final and later served 10 years as Dublin County Board chairman.

The memory of 1985 is never forgotten.