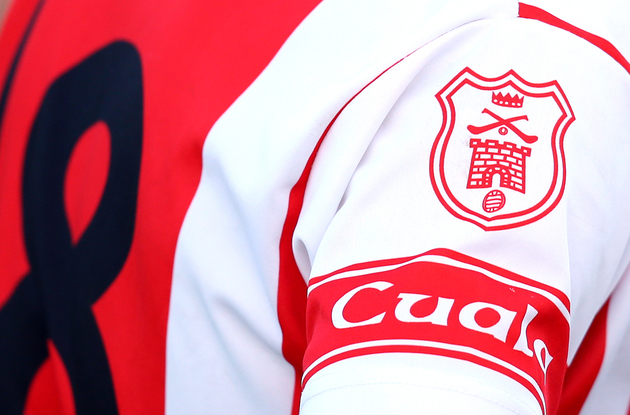 First home league match of the season for Cuala 4ths and the opposition in Hyde Park was Ballyfermot De Salle with a 3.00 throw in. Clear sky, sunshine and no breeze whatsoever – almost summer like conditions. Coming off the back of a win in the previous game there was determination to take another 2 points and the strength and competition in the panel meant posed plenty of problems selecting a starting 15.

But the best of plans become unstuck and for us it started before the ball was thrown in. Ballyfermot only had 14 players and opted to request a 13-a-side game (this is within the rules of the league at this division). This hugely disrupted our preparation as just minutes before throw-in we were forced to drop two players to the bench – the unfortunate casualties James McCarthy and Conall Molumby – and make positional changes to the lineout. It left us with eight subs – a nice problem but not one we wanted. Cuala got off to a great start with Paddy Murray hitting the back of the net with practically our first attack. A flying start but we struggled to stamp control and Ballyfermot hit back with 4 scores of their own – 4 points to take a 1 point lead. Both teams were wasteful of chances and it looked like Cuala were going to pay the bigger price when Ballyfermot were awarded a penalty. But shot stopper sumpreme Cormac McGovern saved the day with a brilliant save. Indeed it was one of a number of great saves that Cormac made during the game and no hesitation in saying he was our Man of the Match. The penalty save seemed to spur us back into action and 2 points from Oisin Misteil saw us lead by the minimum at half time 1-02 to 0-04. The second half was a real seesaw affair. Ballyfermot went ahead by 4 points as they added 5 scores in succession to lead 0-09 to 1-02. At this stage, it seemed like one of those days as our increasing tally of turnovers and wides were going to cost us but the game was far from over and the tide slowly turned in our favour. A point from Luke Kelly, a goal from Conall Molumby and another point from Luke in a period when Ballyfermot added just 2 points brought it back to a 1 point game. There were a lot of stoppages as Ballyfermot, tactically, tried to slow down the game but in the broken play we pushed on and despite a frustrating amount of misses we did manage to secure a 4 point lead with points from Shane Kelly and Karl Schutte and what looked like a match winning goal from Shane. We were ahead 3-06 to 0-11 as the end of normal time approached and another inspiring point blank save by Cormac seemed like a win was in sight. But the earlier stoppages resulted in a generous amount of added time during which Ballyfermot managed to barge their way through for a goal and quickly added a point to level the game. Thankfully for us, Ballyfermot were equally guilty of missing chances on the day as they had a late chance to win the match with a free kick from about 20m directly in front of goal. To our relief they sent it wide. So as the final whistle blew we had to settle for a draw on a Final Score 3-06 : 1-12. It was a hard earned point but one to be proud of for the battling performance that achieved it. Full credit to the players for the fight back that turned a 4 point deficit into a 4 point advantage. Being caught at the end doesn’t take away from the positives and a draw was probably a fair result for both sides. Despite having to adopt to the surprise ’13-a-side’ rookie manager Kevin Dowling did an excellent job on and off the pitch and ensured as many as possible of the 8 subs got a run. And a final unusual statistic – all our scores came from play. Final score Cuala 3-06 : Ballyfermot 1-12