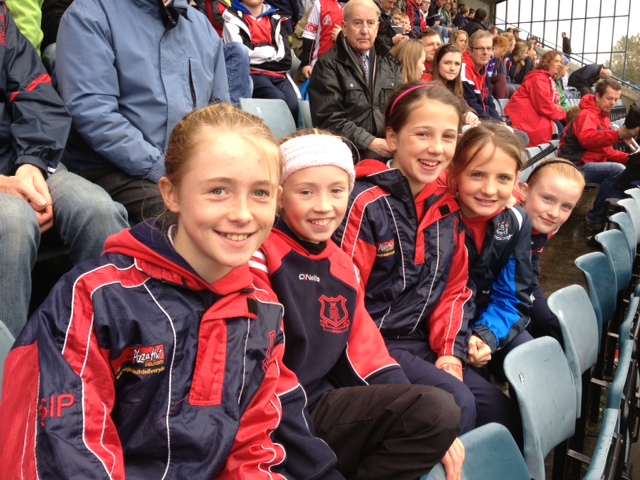 There’s more to sport than the collection of trophies and so it proved on Sunday when the senior hurler’s came up just short against Kilmacud in the County final but the club gained so much more in terms of the number of people that travelled, the excitement they felt throughout the week and the real sense, among many for perhaps the first time, that they were part of something bigger than any one single team. Of course the defeat hurts but well done to Crokes who were better on the day. We will put up a link later so that you can read a report of the action on the pitch from Monday’s Irish Independent.

Shane Stapleton summed it up for Cuala when he was back on twitter after the game to say that the Cuala Warriors would be back again for more next year. The youth of our team and the pipeline of talent coming through from the juvenile ranks bodes well for a future packed with many more days like these, and many of them that will end with the score in our favour.

Indeed, why wait for next year when our next County final takes place this weekend. The Senior Footballers now take centre stage again after a strong performance in last week’s semi final of the Intermediate County Championship saw them through to a third final in a row. Fingallians now stand in our way and the game gets underway next Saturday, back in Parnell Park under lights with a 6pm throw in.

Follow all the build up for the big game on the Cuala website www.cualagaa.ie, on our facebook and twitter streams. Among the clashes to savour will be our own Mick Fitzsimons up against Dublin All Star Paul Flynn and the two sides will be well matched for a classic.

Our Junior hurlers posted a good win against St Brigids in the league on Sunday, as did our Minor A footballers who travelled to Portmarnock and came back with a 1-08 to 0-08 Championship win.

Other good results from the weekend included semi final championship wins for our U13 and U14 girls, a Championship shield semi final victory for the U15A footballers who now face Ballyboden in their final and a fine 4-06 to 1-09 win for the U14A footballers to round off their league campaign. The U13A footballers played out a high scoring 5-10 to 5-10 draw with Thomas Davis.

It wasn’t only at the senior level that Cuala and Kilmacud came up against each other. The U10 hurlers graced Parnell park at half time and got a taste who what it might be like in the future while the younger boys and girls had blitzes in the autumn sunshine on Saturday afternoon. All credit to the players who showed great skill and a fine eye for goal.

The Social season is back this Friday night and we are looking for volunteers from among parents and club members to ensure these important fund raisers can be carried on with. Contact your team mentors, Zita or Lorraine if you are over 25 and able to help out for a couple of hours.