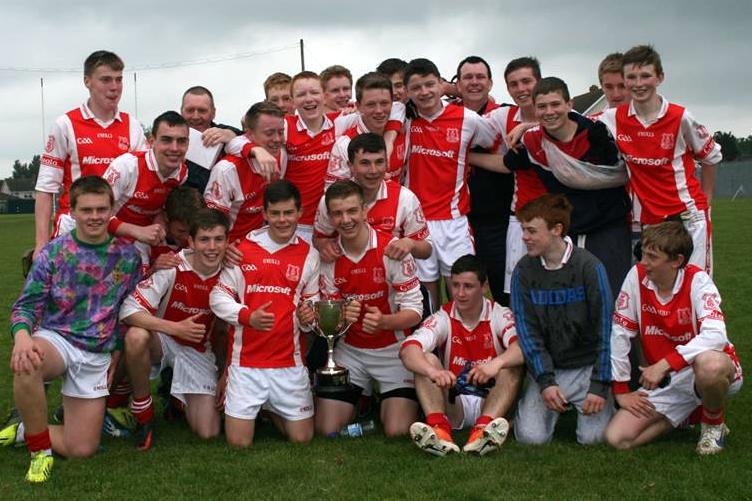 U16 Dublin B Football Championship Final

Cuala 2-13
Craobh Ciarain 1-06
Cuala led this final from start to finish but the game was closer than the score suggested, and turned on a ten minute burst after half time and three key saves from the Dalkey men’s keeper Cormac Quinn.
Jack Hartnett opened the scoring from midfield in the first minute and Cuala added two more through a Tom Magee free and a Fionn O’Driscoeil score from play before Craobh Ciarain opened their account in the ninth minute.
Two saves from Quinn in the 10th and 24th minutes prevented certain green flags and Cuala edged ahead through two more Magee frees, a brace from Ross Broderick and one from his brother Jamie.
The Coolock side popped over two and brought the game to life with a goal on the stroke of half time after Cuala’s Fionn Myers was down for an extended period with concussion.
A one point lead at half time was a fair reflection of the game but Cuala sprung from the traps at the start of the second period.  Two points from substitute Fergus O’Rourke came either side of another Magee free and on 36 minutes Magee went low from a close in free and drove the ball into the roof of the net.
Two minutes later Ruari Frankling latched onto a through ball from Diarmait Maas, played a 1-2 with Joe Mahony who was excelling at full forward and scored Cuala’s second goal.
With the score at 2-11 to 1.06, Craobh Ciarain won a penalty but Quinn dived low to his right to keep it out and keep Cuala well on top.
The defence remained strong with Peadar O’Cofaigh Byrne, James Murphy and Charlie Crown cleaning up in the full back line and Mark Tracey standing tall at the heart of the half back line.  Thomas McCarthy and Rory McMahon continued their strong run of recent form and the pair were instrumental in winning ball that led to Cuala’s two final points from O’Rourke and Mahony.
Stephen McDonnell, Cathal O’Floinn and Conor Newman played their parts coming to replace tired legs in the closing stages and when the final whistle blew there was a ten point margin.
Tom Magee was awarded the man of the match for his tally of 1-04 but the game was won through powerful performances from 1 to 20.
Cuala: Quinn, O’Cofaigh-Byrne (McDonnell 55), Murphy, Crown (Maas 35’), McMahon (O’Floinn 58), Tracey, McCarthy, Hartnett (0-01), Frankling (1-00), O’Drisceoil (0-01), Magee (1-04), J Broderick (0-01), Myers (O’Rourke 30’ 0-03) Mahoney (0-01) R Broderick  (0-02) ((Newman 58’) Subs not used Johnson Di Felice; Mentors Sean McMahon, Dave Tracey and Rob Hartnett.
Evening Herald Match Report: HERE