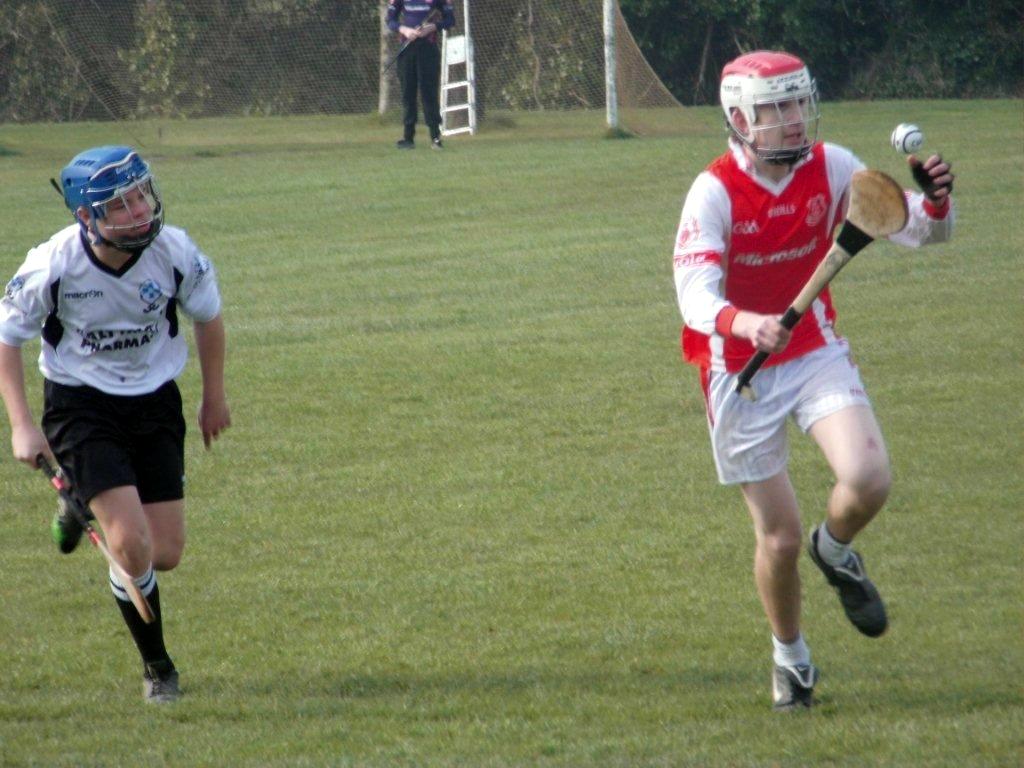 They say goals win matches, and so it was that Cuala’s second U16 hurling team with three goals either side of half-time, took the honours in this entertaining game in balmy but damp conditions  in ShanganaghPark. This was a very workman-like performance from this team where every mistake by the Council defenders was punished. Cian Rellis helped himself to 2-2 and shared man-of–the-match with Bernard O’Sullivan who worked tirelessly around the middle of the field with Davy Nash and Craig Finn. Shane Molumphy’s catches were causing all sorts of trouble for the Galtymore crew and Kevin Kirwan was majestic at centre-back. Charlie Crown, Cathal Scanlon and George O’Brien were giving nothing away at the back, and Niall Morrissey pulled on everything that moved. A long delivery on 4 minutes from O’Sullivan was deflected by the defenders for the first goal. Rellis followed up on 12 minutes with a lovely piece of skill burying the ball in the net from close range. Tadhg Sheridan added a third goal just before the interval to leave Cuala in a commanding position at the break on a score-line of 3-2 to 0-2, the two points coming from Davy Nash and Paddy Byrne from distance. Conor Newman and Tiernan Dunne were like terriers in the half-back line. Good Council were obviously frustrated at the hooking, blocking and hassling from the Cuala players, and on 20 minutes this frustration boiled over and a red card was shown to their full-forward. With an extra man, Cuala spread the play to the wings and continued to apply pressure in the second period. But Council, to their credit, came out with much more determination in the second half and hit 4 quick points without reply. Cillian O’Feinneadha made two very good saves in quick succession and it looked like Good Council were beginning to stage a come-back. But Rellis wasn’t having any of it. He took his second goal on 40 minutes and that was quickly followed by a determined run from the stylish Kirwan who tore his way through the cover to find the back of the net on 42 minutes. There was no way back for Council. O’Sullivan hit a long-ranger on 50 minutes, Paddy Byrne tidied up proceedings with another goal on 55 minutes, and Rellis took two more points at the death as Cuala ran out winners on a deserved scoreline of 6-5 to 0-7.

Footnote 1: With three games played, Cuala are joint second place in the League with Commercials on 4 points. Erin’s Isle are top on 6 points. Good Council had a comprehensive win over Lucan in their last outing.

Footnote 2: Great to see the hurling talent coming through the Juvenile Section. On this performance, it won’t be long before Kevin Kirwan follows in his father’s footsteps and graces a Dublin jersey. George O’Brien and Tadhg Sheridan are two more to keep an eye on for the future.

Next up: St. Perigrines away on 12th April.