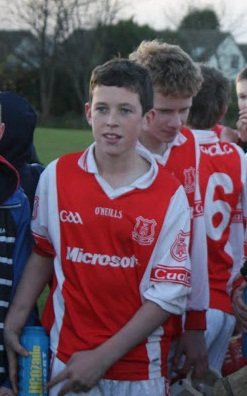 An outstanding first half performance packed with honest endevour, off-the-ball movement, flair and skill was enough to see Cuala’s U16 warriors win the “Battle of Clontarf” on Tuesday 22nd April in St. Anne’s Park.

Cuala began at Championship pace and were up by 11 points within ten minutes. The Clontarf team were shell-schocked as man-of-the-match Mickey Wylde and his side-kick Fionn O’Tighernaigh hammered in two goals within three minutes. Such was the eagerness and work-rate around the middle, that Clontraf could hardly get out of their own half in those early minutes. Good control, slick passing and players running in support led to two more points from Tiarnan Lane and Wylde before Stevie McDonnell’s first goal of his brace. It was a wonder-goal scored from 25m out on the left. The ball was cut off the surface into the top right hand corner.   Within four minutes he had his second and with the score at 4-3 to 0-2 after the first quarter. The game was running away from the Northsiders. Mark O’Treasaigh and Joe Mahony were the play-makers in the attack, winning possession and handing off passes, but it was the half-back-line and mid-fielders for Cuala who were providing the ammunition. O’Treasaigh helped himself to two points and Big Joe kicked another of his ‘trade-mark’ goals. Wylde took his second goal following good work from O’Tighernaigh on the right and finished with a point as the ref called a halt to the half on a daunting score-line of 6-7 to 0-3.

But Sport can be a fickle dance-partner! The re-start began and a whole different story unfolded. The Cuala players had packed up their tools and were heading for the DART when the Clontarf team showed up. Di Felice, who had been doing Sudoku puzzles in nets in the first period, began to break a sweat. In fact, such were his efforts in the second half, that he was pushing Mickey Wylde for the man-of-the-match accolade. Coronella in front of him was immense. Quinn on the left took on their best forward and canceled out any significant threat from him. McMahon’s cuteness and stick-work on the other side closed the back door. But like the sea along the coast, the tide was rising in Clontarf! Di Felice stopped four shots but had to sacrifice ‘65s. Three unanswered points from Clontarf in 10 minutes gave them hope. Cuala’s touch deserted them, their work-rate dropped and their clever support play was a distant memory. Clontarf’s number 8 lorded the skies. Frustrated with passing inside, he took off on a solo run from 45m out. He got as far as Coronella before his ticket expired. He was stopped in his tracks. But the dam was leaking. A kicked goal on 16 minutes brought the biggest cheer of the evening from the Clontarf line. O’Tighernaigh chipped over a point in reply. Di Felice steadied the ship with two huge deliveries off frees from fully 75m.  Clontarf had Everest to climb but they were now playing with their hearts. Di Felice hit another monster into the night sky. The Clontarf keeper lost it in the lights and it landed in the net behind him. Cuala were out-scored 1-4 to 1-5 in the second half but their endevours in hat first period saw them head back down the coast with the 2 points on a final scoreline of 7-11 to 1-8.

Footnote 1: Cuala go joint second in the League with Ballyboden, both teams on 6 points, both with a game in hand. Crokes and Na Fianna share top spot on 8 points.

Footnote 2: Congratulations to Clontarf GAA and the local County Council for the magnificent facilities, the condition of the pitches and the lighting. It was a joy to play hurling out there.