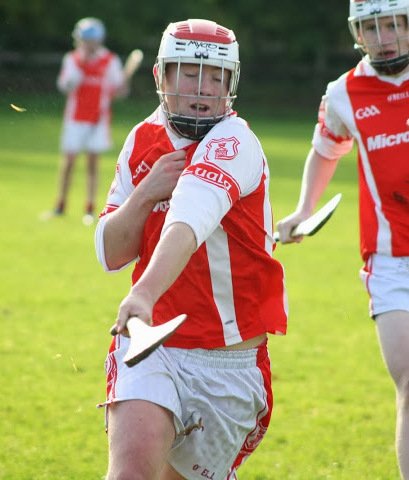 Cuala’s U16 hurlers failed to take three gilt-edged chances in the last quarter to let Kilmacud Crokes off the hook in this tense and torrid game played in heavy conditions in SilverPark. Joe Mahony settled the Cuala nerves with a fine point off his right within a minute of the start. Crokes responded with a free from Roche 5 minutes later. Cuala’s normally tight defense went awol for large parts of the first half and allowed the Crokes full-forwards space to roam. The writing was on the wall early on when both Crokes corner-forwards showed great pace in coming on to balls played into an ocean of space in front of them. Cuala’s full-back line and goalkeeper kept out the water, but it was only a matter of time before the dam sprung a leak. The Crokes full-forward hit his first goal 9 minutes in taking a good pass played from the corner. Cuala responded as they always do with a dogged, work-man-like effort. They won turn-over ball around the middle and a brace from ‘Cool-hand’ Lane left the minimum between the sides with 20 on the clock. However, a devastating four minute spell on 22 minutes turned the game in Kilmacud’s favour. The full-forward found space in front of goal and buried a shot passed Di Felice who had no chance this time. Almost immediately, Roche pounced on a ball being lifted by a Cuala defender and buried it to the net. Cuala were rocked back on their heels and had a mountain to climb 3-2 to 0-3….but climb they did. This Cuala outfit never give up! Fionn Myers took a point off his left and Lane continued to trouble the scoreboard with a free after determined work by Diarmid Maas who worked tirelessly all through.

3-2 to 0-5 at the break and the Cuala players began to stir themselves. Mass, O’Drisceoil and Murphy began to build a wall at half-back. Lane and Hartnett added some steel around the middle and Tracey, Quinn and Wylde hooked, blocked and harried as if their lives depended on it. Crokes began to feel the heat of a Cuala team in full flight. No quarter was asked and none was given. O’Tighernaigh had arrived for Myers and O’Floinn replaced MacGearailt. The grip was tightening around the Crokes forwards and space was now at a premium. They were now finding it difficult to breathe. O’Treasaigh took the first after the break, Quinn took the second, Lane took his fourth and Hartnett hit a long-range exocet.  Crokes were silent. 2 points the gap 10 minutes into the second half and Cuala were dominant everywhere. But man-of-the-match Roche in the Purple-and-Gold wasn’t having any of it. He stopped the bleed with a point against the run of play and responded to points from Lane and Quinn with 10 to go. Crokes could hardly get out of their own half and were holding on for dear life.  Roche was their only exit but the pressure was telling. Cuala’s first goal chance came from the right as a ball was played across the square 5m out. Embarrassingly, two Dalkeymen pulled on it one after the other and met fresh air. The ball was cleared. A minute later another ball came across the square this time from the right. The cover had gone fishing! Big Joe pulled on it, the collective Cuala side-line jumped in the air…but the ball somehow missed the target with an open goal beckoning. The goal just would not go in. 3 points in it and time was against he Reds. Emmett Murphy was dressed for action and brought into the fray. First ball into his hand was fired in anger towards goal. Stopped and cleared. There was now desperation in the Cuala ranks as they repeatedly went for goal to level the game. But it would not come. Another high ball came across from the right and four Cuala forwards rose in unison to meet it. Murphy got the touch and again the Cuala line hit the ceiling assuming the game was drawn. The referee blew the whistle….he formed a rectangle with his two hands and the goal was dis-allowed. Final score in an exasperating finish was Crokes 3-6 Cuala 0-12.

Footnote: Crokes top the Division with three wins out of three. With two games played, Cuala are mid-table on two points.

Next up: Whitehall Colmcille at home in ShanganaghPark at 3.30pm on 12 April.