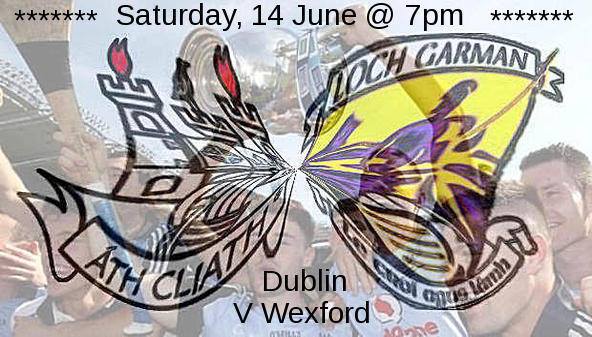 Noon. The Johnstown car-park’s full. Cuala’s 98’s are on the road again. Exams nearly over. Nervous kisses from their mothers (with sly applications of sun-tan lotion), their fathers glad to see the back of them for a day! The fight to get to the back-seat of the O’Grady bus. The iPhones and ear-phones in place, the driver slipped her into gear and headed for the N11. Finbarr, John, Steve and Victor the conscripted few from the adult generation who unfortunately lost the toss and were forced into taking the trip. Victims of the front seats. With the Dublin flags tied to the windows, this Band of Brothers was heading down to support their brothers in Red – the Schuttes, O’Callaghan, Gough, Cronin, Timlin & Treacy. The Dublin hurlers were traveling down to play against the Strawberry-pickers in WexfordPark that evening. There was also a little matter of a stop-over in St. Martins to play a hurling challenge on the way, but that was of lesser importance.  The first call for a ‘piss-stop’ was at LoughlinstownHospital – it looked like it was going to be a long day?

St. Martins boast relatives and ancestors of Mick Morrissey (An Cathaoirleach), Colm ‘Horse’ O’Leary two great hurling men who were instrumental in Cuala winning their three Senior Hurling Championships. Liam Dunne would have Murty Dempsey on the line with him in WexfordPark, another Cuala stalwart from past Championships that learned his trade in Red-and-White. Thoughts of Cuala President Jimmy Doyle, Mick Dempsey and Matt Browne as we trundled past Buffers Alley, Rapparees and Oulart and the great tussles we had in the day. But this is the new generation of Cuala hurler. This is a generation without fear. Black-and-Amber doesn’t shake them, and the sight of Purple–and-Gold isn’t going to trouble them.

Coronella and O’Treasaigh were awesome, Hartnett, Quinn and Lane were not far behind. Maas threw himself into everything and, as usual, tried to go through gaps that weren’t there. 20 minutes in he had to retire with a painful hip injury after another frontal assault. Back to the Viva Clinic with Nessa – she’s now on first-name terms with all the doctors there!  Emettt Murphy decided he’d had enough in the forwards, and wandered back to play behind the half-back line. Mahony scored 2-1 and Cuala looked reasonably in control, but the trip down, the sun and the seaside sapped their energy. They weren’t keen on fighting today. The Wexford boys made hay. They’re the best in Wexford and it won’t be long before their number 13 graces WexfordPark himself. He helped himself to 1-6 from play and was part of all that was good about Martins. Game over. The ref tells us that the Wexford Senior team are ‘on fire’. He refereed their recent games with Tipp and Cork. “That full-forward line will win it for us, Conor McDonald is playing out of his skin”. A fit, lean, sun-tanned man with shaven head and a trim moustache appears on the field. The lads were curious. Georgie O’Connor is well known to the older generation, but lost to the new. His catches in midfield for the Yellow-bellies were legendary. He’s building a nice set of players for the future in St. Martins. Mick Morrissey arrived. He hasn’t changed a bit. He pointed out the 3 adult pitches, the 3 juvenile pitches and the hurling wall that was as big as DalkeyVillage itself! He tells me they have access to land all the way over to JohnstownCastle. Phenomenal facilities – it would be great to play Hurling down the country!

Only two kilometers to Wexford Park via KFC, but we found ourselves lost. The lads are a great help – “You should have taken a right at that last round-about”, “Ye’re going round in circles”, “ Take a right at the Whitfield Hotel”. We ask a Polish guy for directions! Eventually we arrive. The place is packed. We see Cody and the wife. Only room available is behind the goals. The game starts nervously. Dublin take it by 5 points with Paul Schutte and Conall Keaney outsanding. Get on to the pitch to look for a free jersey. None available. Any hurls or sliothars spare – we’ll even take a Wexford one? No, sorry lads. Bump into 20 more from Cuala. Back on the bus to sit in traffic. The singing begins. Phone-call to Seanie to show him how good singers we are, let’s try Chris. Tiredness and the rhythm of the bus kicks in. Peace and quiet at last. 11pm and still bright. We’re driven back to Johnstown car-park, exhausted. They’ll sleep tonight. A great Hurling day out.

Next up: Cuala’s U16s play Ballyboden in the League in Shankill on Thursday 19 June with an early throw in at 18:00pm. They then play away to Faughs on Saturday 28th June 3.30pm.