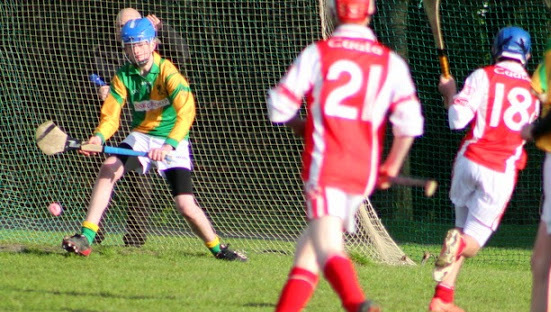 Three goals in five minutes just before half-time put Cuala firmly in the driving seat in this highly entertaining U16 Hurling League game against Faughs in summer-like conditions in ShanganaghPark. Before the three-goal-salvo, the game was finely balanced at 1-3 to 0-5 the Cuala goal coming from Stephen McDonnell who didn’t need a second invitation to burst the net after marauding work by Big Joe Mahony and Fionn O’Tighernaigh. Big Joe’s physical presence up front was causing all sorts of problems for the Faughs full-back line, but it was the quality and quantity of ball coming in from outfield that eventually caused the Tymon Dam to burst. Joe took Cuala’s second goal with a ground strike after he wouldn’t give up on a lost cause on the Faughs ’21. He hooked, blocked and harried the defenders and fought and kicked his way through the green-and-gold defence until he found the net. Cuala’s half-forward line of Mark Tracey, Cormac Quinn and man-of-the–match Tiarnan Lane, was immense all through. They tortured the Faugh half-backs and continued to win clean possession and head for goal. Lane was all over the place. He covered every blade of grass on the field and sneaked in for two goals, the first a wonderful flick into the top of the net. His value around the middle of the field was immeasurable. Fionn O’Drisceoil marshaled his half-back line very well.  He hurled with passion and aggression as James Murphy and Cathal O’Floinn held the scoring threats out on the flanks. Diarmit Maas and Jack Hartnett controlled everything around the middle and just before the break, Hartnett cruised in from deep to latch onto a wonderful pass from O’Tighernaigh to crash the ball to the net. The teams went into the break on a score-line of 4-4 to 0-5 in favour of the Dalkeymen.

Cuala swopped ends and now had the assistance of a stiff breeze into the Graveyard goal. Di Felice used it to great effect to land his puck-outs in front of his corner forwards. Mickey Wylde, Fionn Myers, Thomas McCarthy and Rory McMahon came off the bench and made an immediate impact. Their work-rate and energy won frees for the Cualamen. Cuala were 4-7 to 0-6 to the good and it didn’t look good for the men from Templeogue. However, to their great credit, they didn’t give up and got a well-deserved goal 12 minutes into the half. Faughs continued to put pressure on the Cuala rear-guard but couldn’t break through the stubborn red-and-white defence. Di Felice made a cracking save as he dived smartly to his right. Faughs were beginning to make hay and the Cuala defenders were under siege.  When it came, Lane’s second goal 18 minutes into the second half eased the pressure. It was the score of the game. Mickey Wylde took a great catch from a huge Di Felice puck-out. He turned, soloed, threw a pass into Fionn Myers in the corner. Myers took possession and floated a sweet ball across the ‘21 to Lane who had arrived from nowhere, and he crashed it to the net.  Right at the death, Faughs outflanked the Cuala defence and the full-forward flicked a high delivery to the net with great skill. But it was too little too late and the referee called a halt to proceedings on a final score-line of 5-8 to 2-9 in favour of the Dalkeymen.

Footnote: The work-rate, energy & enthusiasm and sheer team spirit has been a trade-mark of this Cuala team. It was demonstrated in abundance during this game, but there are sterner tests ahead!

Next up: A mouth-watering local derby against near-neighbours Kilmacud Crokes on Saturday 29th March at 3:30pm in SilverPark. That should keep the players’ minds focussed over the next couple of weeks.