Sport can be a cruel task-master. Games that you dominate from start to finish sometimes don’t get reflected on the score-board. Decisions go against you; the ball breaks the wrong way. A game Cuala led from start to finish was snatched away with a point in the last minute of the game. McCarthy’s pile-driver 2 minutes into injury time hit the Na Fianna keeper and Cuala came away with nothing. The Na Fianna team celebrated their ‘get-out-of-jail’ card. But they knew they had been in a game, and what a game! Championship pace all through. Scores earned from serious hard work. Cuala’s Band of Brothers hooked, blocked and harried their much-vaunted opponents all over the pitch. Stevie McDonnell’s goal after a minute was the result of a series of blocks and the hi-pressure game played by the Cuala forwards. Na Fianna hardly crossed the border into Cuala territory but when they did, Coronella and his defenders met them with fierce resistance. Fionn O’Drisceoil was immense in the diamond with Mark Tracey and Tiarnan Lane. Fionn O’Tighernaigh and Fionn Myers battled for everything. Joe Mahony and Cathal O’Floinn were throwing themselves into every ball. Two frees awarded and converted. Cathal O’Floinn found space and pushed one over. Keeper Ryan Di Felice unleashed a monster free from 75m on 20 minutes and Mickie Wylde hit another from play 2 minutes later. Cuala were up 1-3 to 0-2. Na Fianna’s full-forward latched onto a ball on the right and put it over. Wylde balanced the account with a beauty. The rain came down as the referee called for the ball on a score-line of 1-4 to 0-4.

The ferocity continued after the interval. McCarthy and MacGearailt came in as legs began to tire. The effort was unrelenting. Na Fianna upped their level of intensity after the break. Dirty balls became critical. 6 yellows were flashed as tempers flared.  A mis-directed clearance across the Cuala square was converted. Another point on 42 minutes put the minimum between the teams. Cuala had most of the possession but failed to convert and hadn’t troubled the scoreboard for 20 minutes. Cormac Quinn was moved into the middle to strengthen the grip.  But Na Fianna’s defence held firm. Two missed frees and shots off target didn’t help Cuala’s cause. O’Treasaigh settled the nerves with a well taken point on 48 minutes, but disaster struck two minutes later.  A deflected ball in the Cuala defense fell badly and allowed the Na Fianna mid-fielder steal in for the simplest of goals. The game was now level coming into the home stretch. Either team could have taken it. Murphy joined the fray up front. Cuala pushed forward looking for the winner. But the time pressure was beginning to tell. With two minutes to go, a rushed Cuala free was mis-picked and resulted in a throw-ball 40m out. The ball was lost and Na Fianna clocked up the winning point. A two-point turnover! Cuala were desperately looking for the response but time was ebbing away. But this team never gives up. A brilliant passing move involving O’Drisceoil, O’Treasaigh and Lane ended up with a pass to McCarthy who was almost clear of traffic 25m out. The defense desperately fought to close him down. The shot was powerful but it hit the keeper and broke to safety. The final whistle sounded and Cuala went away frustrated on a score-line of 1-6 to 1-7.

Footnote 1: Na Fianna go to the top of the U16 Division 1 League on 10 points with Ballyboden, Crokes and Vincents on 8. Cuala are on 6 points with a game in hand. 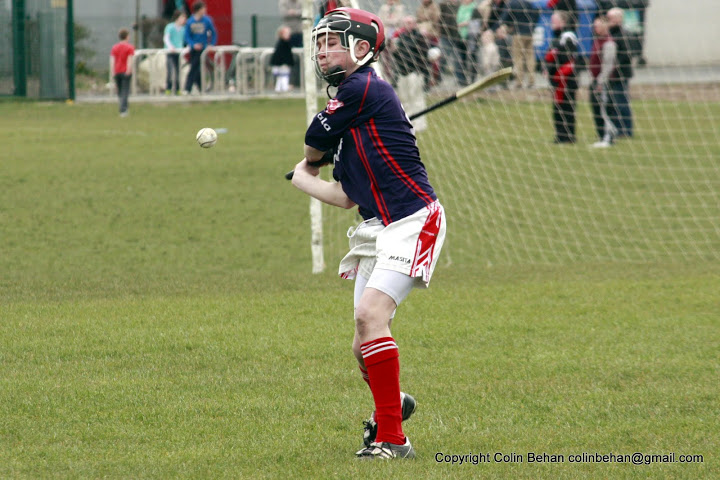