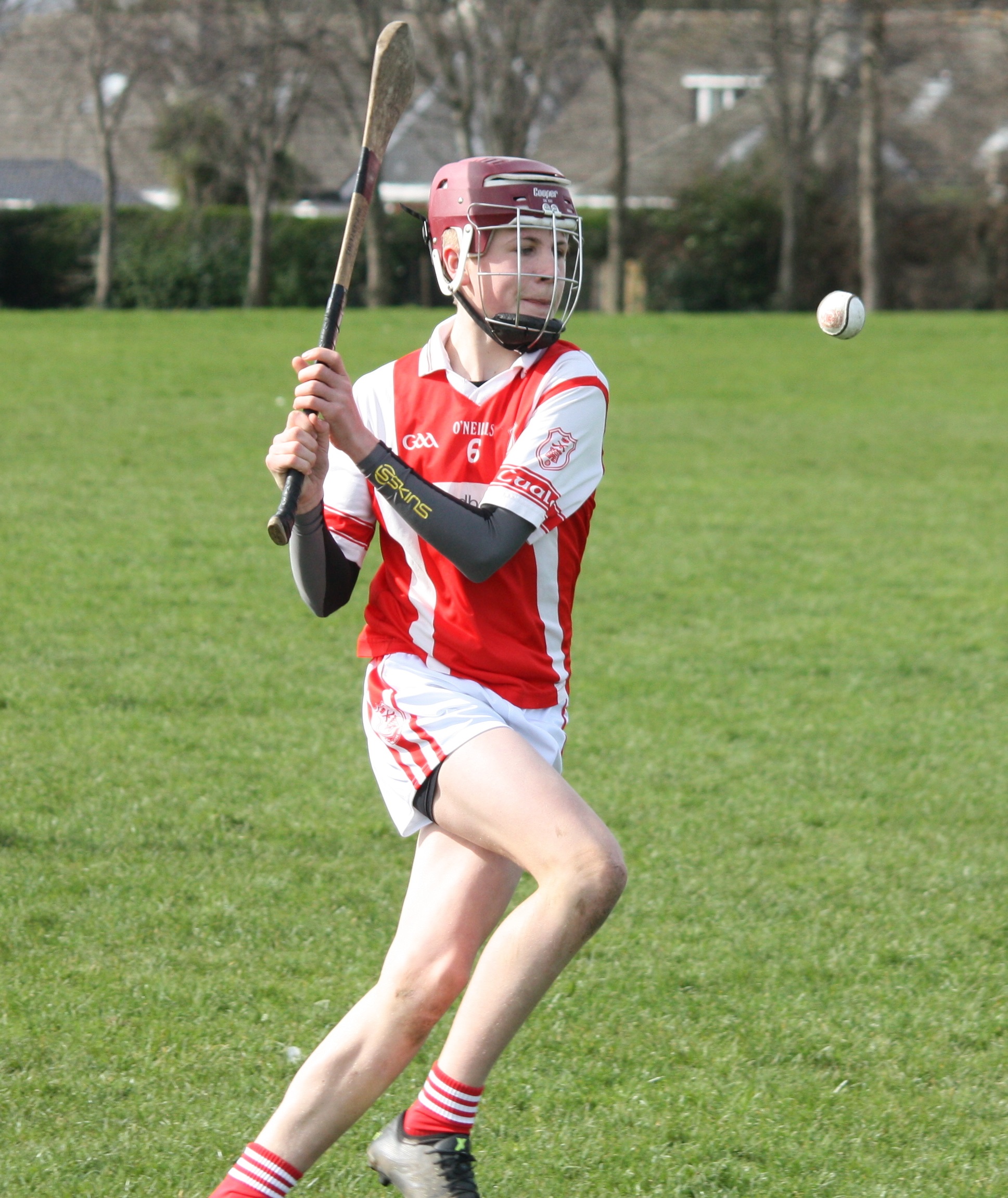 Cuala’s U15 hurlers took a trip out to 12th Lock to play table-toppers Lucan on Thursday 6th April in the Division 1 league. This was an outstanding performance by the red-and-whites who showed scant respect for their illustrious National Féile  opponents. They tore into their opposite numbers from the off and controlled the game over the first quarter. Shane Hayes showed what a wonderful prospect he is by taking 7 points and Conor Grant kept the lid on a very dangerous full-forward. But the Cuala man-of-the match has to be Eoin Quinn who again showed his value to the team by marking Lucan’s best player out of the match. The Lucan 11 is Dublin’s best forward and was kept to a single point from play by the industrious and talented Quinn. It won’t be long before the Dublin selectors notice his abilities. Cuala and Lucan were level moving into the second quarter and Ryan Malone and Conall O’Toole were their usual dominant selves around mid-field. But goals win matches and a dubious decision gave the Lucan 11 a penalty on 22 minutes which he dispatched with aplomb. Tiernan O’Braonain is coming back to his very best and enjoyed a great game at corner- forward clipping over a lovely point on 25 minutes leaving the Lucan side 1-6 to 0-6 ahead coming towards the break. Conall O’Toole and his opposite number swopped points and it looked like the oranges were being readied when the Lucan full-forward broke through the red’s defense and hit a rasper to the net. It was not a fair reflection on the effort and skill shown by the Dalkeymen, but again, goals win games.

To their credit, Cuala got back into the game after the break and immediately brought the lead down to 4 points. But perhaps they were trying too hard and giving away silly, unnecessary frees by a fussy referee. Lucan didn’t spurn the chances and converted every one of them. Cuala pressed forward looking for scores, but a third goal arrived from the Lucan full-forward on 45 minutes. Still Cuala would not lie down, Dave O’Dowd linked up beautifully with Conall O’Toole, rouned his player and split the posts with the most glorious point of the game. Cuala were now pushing forward and going for goals. They tried to break through a resolute Lucan rear-guard, and were leaving things a bit open at the back. Eoin Ruigrok is developing into one of the best keepers in Dublin. His puck-outs were accurate and long and his double-save on 45 minutes was outstanding. But despite a late point from Cian Sinclair, Cuala finished the game on a score-line of 0-15 to 3-14. Cuala need to work on keeping down their free-count and on their shooting before their next outing. It was a really fine effort from the team, full of grit and determination. They came away very disappointed with the result but they know their performance is not far away from the best.

Next up Cuala play Fingallians at home on Sunday 23rd April. They have started the League by taking on the three toughest teams in their first three outings and now have to focus on winning all their remaining matches. Not a problem to these red warriors!