“Hard-work will always beat Talent, when Talent doesn’t work hard”  that was the simple message given to the Cuala panel as they prepared to face League Table-toppers Na Fianna on a cold, bright afternoon on a lively sod in Thomastown Park. Na Fianna who boast 7 players on the Dublin U15 Development squad, had already disposed of League-favourites Ballyboden on their previous outing, and must have crossed the Liffey thinking that Cuala would roll-over easily and hand over the points. But a shock was in store for them! What they encountered was more a war of attrition then a hurling match – they hardly got a free strike on the ball over the entire hour!

This Cuala outfit may have come up from Division 2 but they have learned a lot along the way.  They know how to play as a unit, they have learned how to support one another and how to close out a game. Their sheer hard-work and endevour means that they swarm like ants all over any opposition and show scant regard for big reputations. Everyone plays his part and no one player is more important than the next. When one player is beaten, another stands in the way; when you try to solo against them, they swallow you up; if you drop a ball, it’s gone. Na Fianna came across expecting to win by 12 points but limped back to Glasnevin on the wrong side of a 12 point hammering!

From the off, Maas and O’Treasaigh dominated proceedings. O‘Treasaigh was catching ball after ball and driving them into the Cuala attack. His two points from play hardly reflected his dominance on the 40’. He is clearly a player for the future. Maas at half-back, refused to let anything pass him and turned back attack after attack. His fellow wing-back Murphy was ‘lording it’ on the other side of the pitch and demonstrated all his hurling ability with a wonderful display, turning defence into lethal attack. O’Drisceoil dominated the centre and sealed off any access to his full-back line. Anything that did come through was met with another wall where Lane in the corner was outstanding. His reading of the game, his playing from the front and his skillful ball control meant he cleared a huge amount of ball. McMahon took up the challenge in the second period and closed down their much-vaunted opponents, limiting them to a miserly 3 points from play. Coronella at full-back galloped out to meet every ball in front, and left De Felice in nets twiddling his thumbs for most of the first half. His own puck-outs were enormous and attracted great admiration from the Na Fianna mentors as well as the on-lookers on the line.

The engine in mid-field was where the real dog-work was done. Hartnett and Johnson showed great courage & tenacity and great physical strength in commanding the centre and winning most of the ‘dirty ball’. No quarter was asked and no quarter given.

The sides turned at half time Cuala 0-4 to 0-2 to the good having played against a very stiff breeze. Wylde and Quinn were sprung from the Dalkey bench and made immediate impact. Between them they would score 1-1. Quinn added huge tenacity and effort to the middle and his point was a beauty. Na Fianna knew they had to respond and upped the ante. Cuala met them square on and drove them back time after time. O’Drisceoil hammered over a 65’ that sailed over the dressing-rooms as he turned and punched the air in delight.

But it was up front where the game was won. Murphy displayed sheer artistry at full-forward and left his man bemused at what he was going to do next. He won his own ball and converted three – two from play way out on the right in the second half. He played in clever ball that on another day could have led to 4 goals. He broke ball for his half-forwards. Myers and McDonnell were tormenting their direct opponents in the corners and were creating great scoring chances.

A goal had to come. Murphy drew out his defender and let the ball in behind him for McDonnell to draw first blood 18 minutes into the half.  The Mobhí Road outfit knew the game was quickly slipping away from them. Their 6 and 8 began to win a few balls around the middle and moved forward with intent. They were stopped in their tracks by the Cuala defensive line. They went for goal with two 21m frees but De Felice and his merry-men were having none of it. With the game heading for over-time and space opening up, Murphy again weaved his magic up front and Wylde was in for the Reds’ second goal which he accepted with aplomb. Murphy and McDonnell slipped over two more and the war was over.

Too difficult to single out a man-of-the-match from what was a huge team performance.

Footnote: With two games played, Cuala lie fifth in the League (10 teams) with a game in hand. They have already played two of the top four teams and now prepare for the away game against Whitehall on 21st April, followed by Brigids at home the following Sunday.

Next up: Whitehall Colmcille away on Thursday 18th April 7pm with St. Brigids at home on Sunday 21th April, 11.30am. 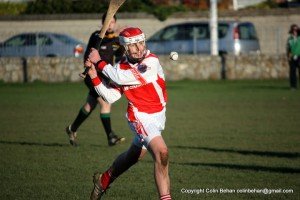