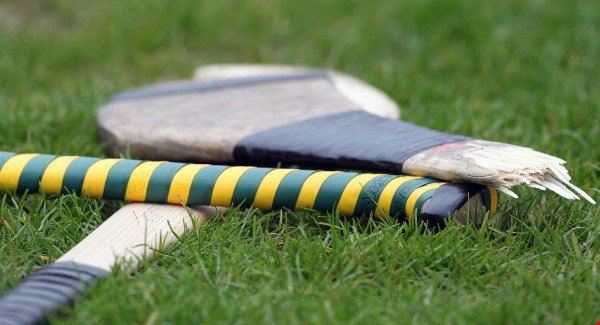 There was the distinct smell of Championship in Thomastown this evening. A cool, breezy evening awaited the two teams vying for a top 4 play-off position in this penultimate round of the U15 Hurling League. 6 hurleys broken, 2 red cards, yellows scattered around like confetti, disputed umpire decision, and schmozzles all over the place. Tempers are starting to fray in the heat of the summer! Cuala forgot to turn up for the first ten minutes and their sharp-shooter-in-chief inexplicably missed three frees that normally he would score in his sleep. On 4 minutes O’Dowd was played in but his shot whizzed by the left hand upright. Plunketts used the breeze to ease into a 1-2 to 0-0 score after a long delivery bounced awkwardly f or Cuala’s net-minder and nestled in the back of the net. The Northsiders played with their 14 as a sweeper and Cuala took a long time to realise that he was parked behind the centre-back.  The introduction of O’Toole on 15 minutes and the brilliance of Malone at 6 began to swing the tide for the Dalkeymen. Cuala upped the tempo and began to hunt down their maroon opponents. Space was at a premium. Quinn, Tobin and O’Dowd were squeezing the live out of the opposition with their tackling, and winning turn-over ball. Four frees from Hayes from Plunketts players over-carrying and from fouls on O’Drisceoil and Malone followed by a wonder-drive from O’Toole brought the Reds back from the dead and the deficit was only 2 points on the turn-around 1-5 to 1-7. Hayes had an immediate chance to bring the deficit back to 1 on the restart as O’Dowd was upended 25m out but he decided to go low, and the shot was saved. O’Braonain’s follow up shot was also saved and the ball eventually trickled harmlessly wide. But O’Braonain is starting to show the form that made him a Dublin Development candidate. His tidy hurling and close control and his determination not to be beaten won him a ball out on the right. He launched a missile from distance that evaded the Plunketts defence and gave Cuala the lead for the first time 2-5 to 1-7 six minutes into the second half. He hit another beauty 3 minutes later. The Plunketts mid-fielder was sent off for striking 2 minutes later but this seemed to inspire the Northsiders. They were not lying down. They drew level on 11 minutes 2-6 to 1-9. Hayes clipped over two and Mahon hit a tidy point from the right to again give Cuala the edge 2-9 to 1-9 coming into the straight. Another point from O’Braonain with ten to go should have been enough to see off the Plunketts challenge, but hurling is never that simple. Malone again put four between the teams with 7 minutes remaining and Cuala looked home and dry. Quinn bounced two players before delivering a clearance from distance. Mahon took the point. But Plunketts weren’t going away empty handed. Three minutes left in the game and a free from 27m was bounced off the ground and hit the roof of the Cuala net. A schmozzle followed the puck-out and Hayes walked to the line with a second yellow. A ball dropped long from the resulting free was kicked wide by a Plunkett’s attacker. The Plunkett umpire called a ’65. Cuala’s defenders were apoplectic. The referee called the ’65 which was promptly converted. 2 minutes into over-time and Cuala were now frantic for an equaliser. From the puck-out a free was called way out on the right hand side, 70m from the Plunketts goal. Malone stood over it, lifted and struck…the ball sailed over the black spot as Paul Flanagan called time. Cuala survived a game they should have won, honours even then, 2-13 to 2-13.

Cuala ease their way into fourth for the first time in the Division and a win in their last game to Crokes elevates them to third. It’s a great achievement from a very committed bunch of players who two years ago were languishing in the middle of Division 2. With Championship preparation starting now, the rest of the summer will be very interesting! Best for Cuala were Malone, Quinn, O’Toole and O’Braonain. Special shout-out to Conall O’Drisceoil who badgered Colman to let him travel up from Wexford for the game.

Next up: Cuala have their final match of the League on Thursday 31st August. It’s a mouth-watering local derby away to Crokes.

Micheál Drops in for a Cup
Scroll to top