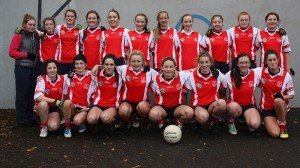 The U15 Football Shield Winners

Playing into a strong wind in the first half, Cuala weathered a wave of early ‘Boden attacks but crucially only white flags were raised at each end during the first quarter. Cuala’s midfield dynamos Hannah O’Dea and Billie Kate Huggard began to dominate and carried the ball repeatedly into the heart of the Boden defence. These attacks lead to a well taken Clara Aherne point,  a cracking goal from Sorcha Barron and two opportunist goals from midfielder Huggard herself.

The half time score of 3-1 to 0-5 left the Cuala girls in a great position with the wind behind in the second half, but the Boden girls came storming out to close the gap with some well taken scores. Blaithin Lane added two crucial points for Cuala whilst at the other end brave and steady defending from Eleanor Moore, Anna Moran and Saoirse Gallagher meant the Cuala girls hung on for a win on the tightest of margins, 3-3 to 1-8.

Others to shine for Cuala included Clodagh Sheehan in goal, Cara Sullivan in defence and Sinead Murphy in the forward line. So a great couple of weeks for the Dalkey girls, who go from strength to strength in both football and camogie.