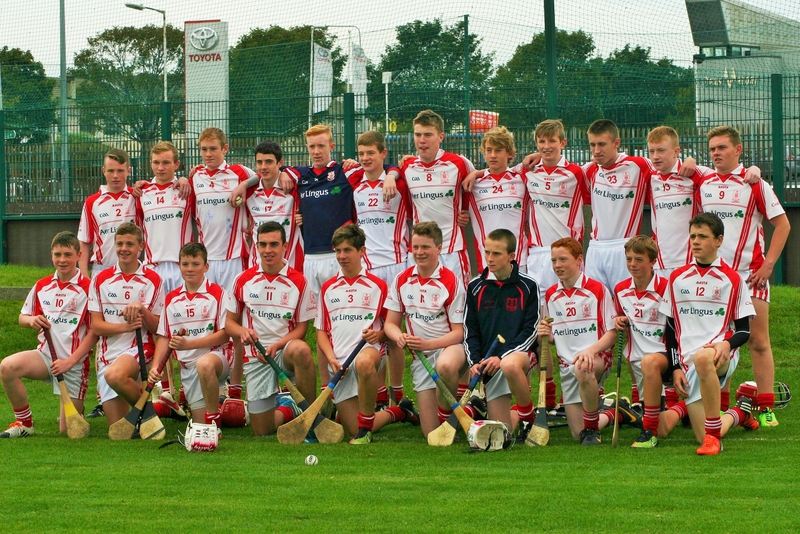 Cuala’s U15 hurlers took the spoils last Sunday by overcoming Naomh Barróg in welcoming Pairc Barróg in the 2014 Division 1 Shield competition. This was a terrific encounter served up by two well matched teams on a beautifully prepared pitch.
Barróg started confidentially and had their noses in front early in the first half thanks to some fine individual scores taken by their talisman, Jason Byrne who pointed a sideline cut from 40 metres and then followed with a blistering goal from the penalty spot. However, Cuala hadn’t quite got into their usual rhythm up front but thanks to some long puck-outs from Finn McGowan and solid defending from Peadar O’Cofaigh Byrne on the full line plus Rory McMahon and Michael Johnson on the half line, Cuala kept Barróg to a slim lead at the break of 1-4 to 0-4.
The second half immediately started brightly for the Cuala lads as they came out from the break firing on all cylinders. First blow to Cuala with an excellent point from Tom Mcgee. However, Barróg responded within a minute with a goal putting them 5 points in the clear with only 10 minutes of the half gone. It was from that moment on that Cuala took total control of the game. From the ensuing puck-out Mark Tracey blasted over the bar and with the entire Cuala force relentlessly attacking the Barróg defense they clinically picked off some lovely points. Barróg had no answer to Cuala’s drive and determination to win this game and at times were forced to concede frees to try and slow down the Cuala forwards as they headed goal-wards. Jack Twomey was on form from the placed balls hitting eight points and added another two from general play. Liam Murphy dodged and weaved his way to point tantalizingly and Tom Mcgee scorched over another cracker from the left side of the pitch to wrap up Cuala’s scoring. Final score N. Barróg 2-4 Cuala 0-15.
All of the Cuala players from numbers 1-17 gave huge performances. There were particular excellent performances throughout the game from captain Mark Tracey, Kevin Kirwan at center half back and the two midfielders Cormac Quinn and Eoghan Potts. In defense Patrick Byrne, George O’Brien were outstanding. Up front Diarmaid O’Floinn was causing havoc to the Barróg defense.
Special mention also for Peter Jackson and Tadhg Sheridan who worked their socks off and Michael (‘The Brave’) Conroy who added to Cuala’s intensity.
Barróg were magnanimous and dignified in defeat and full credit to them for their congratulations to Cuala at the end.
Cuala now march on to the semi final of the league division 1 to be played on the 19th October.
Thanks to all who came our to support the lads on Sunday. A memorable day indeed.
07/10/2014/by Cuala Webmaster
https://cualagaa.ie/wp-content/uploads/1-2014-Cuala-U15-Hurlers-Shield-Winners.jpg 534 800 Cuala Webmaster https://cualagaa.ie/wp-content/uploads/Asset-2xxxhdpi-1-1030x202-1.png Cuala Webmaster2014-10-07 21:26:342014-10-08 11:00:53U15 A Hurlers Take the Division 1 Shield
Clinical Minor footballers take Vinnies scalp in championship

All Ireland Forecast the Score – Winner Alright !
Scroll to top