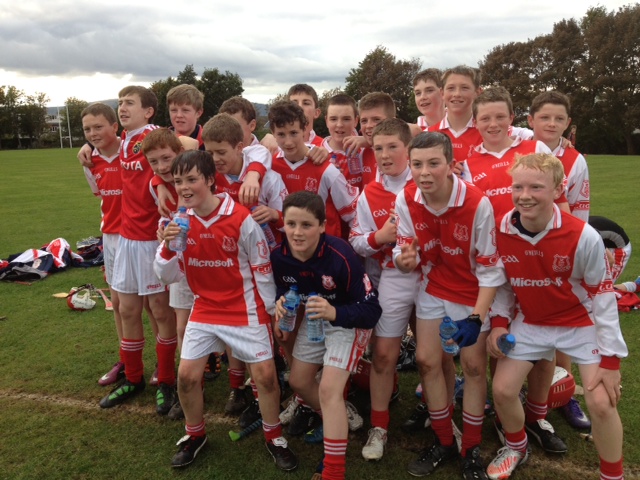 Congratulations to the U14 B Hurlers who were crowned Division 5 Champions on Saturday after a spirited 3-11 to 3-2 win over St Peregrines at Thomastown, getting what could be the biggest week in the history of the club off to a flying start.  This is a side who stuck together despite winning only one match last season to thrive this year as the best B team in Dublin.

Peregrines got off to a flyer of a start with two goals in the first five minutes but Cuala stuck to their game plan and drew themselves back into the game with a lions share of posession and a goal from Shane as well as points before the break from Paddy, Shane, Fionn and Cian.

Trainling by one at the break but now with a breeze behind, the lads turned on the style that has brough them through ten straight league wins.  Cathal was strong at the back and launched attack after attack when the ball came back to him.  Mikey, Tiernan, Nessán were well on top in the full back line while Charlie, Jack and Bernard cleaned up on the half.  Davy and Jack set up wave after wave from the middle while Lorcan Fergus and Fionn took on their men time and time again, winning frees when they weren’t getting straight through.

The points were racking up when Lorcan was bundled over in the box and Jack stepped up to drive a penalty into the back of the net.  Peregrines defence was playing well but they couldn’t contain the lads who were ably supported at just the right moments with scoring appearances from Ruari and Craig as well as Eoin, Malachi and Charlie playing their part. A couple of close frees from Fionn, a long one from Jack that dropped under the bar and two great scores from Ruari and Lorcan made sure of the title with two games still to be played and the lads certainly made sure of a wet and wild celebration after shaking hands with fine opponents on the day.