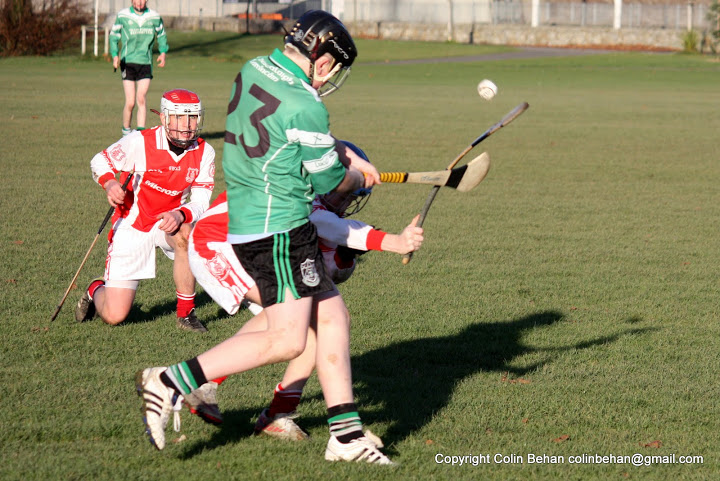 Three points down with 20 minutes to go! Not many in the huge crowd gave them much of a chance. But these guys are different to the ordinary – they never, ever give up! They have a fighting spirit and a will to win that only the very best teams possess. That ultimately was the winning of this very close encounter on a glorious day for this ‘Band of Brothers’. Lucan couldn’t score in the final quarter and Cuala won by 3. A turn-around of 6 points decided that Cuala would play in Division 1 of the Hurling League next season; Lucan would continue to sell their wares in Division 2.U14 LEAGUE DIV 2 PLAYOFF – Saturday 17th November 2012, Thomastown Park
CUALA 2-12; LUCAN SARSFIELDS 1-12

After 63 gruelling training sessions and 14 hard-fought matches, only 60 minutes of hurling stood between Cuala’s U14A warriors and their prize. They had one single objective: to turn-over this talented Lucan Sarsfield’s side and return to the top tier. If their pre-match warm-up was anything to go by, the lads were definitely ‘up for the match’!

As the sun shone down on a Thomastown pitch that has been through the wars this season, the game itself started slowly. The referee was fussy and the free-count was high. In the opening quarter, frees were the name of the game. Emmett Murphy was at his majestic best from the placed ball as Cuala raced into a 5 point to 2 lead. The tenacious, direct play of Fionn Myers, Dairmait Maas and Michael Wylde forced the boys in green to put a halt to their gallop, and Murphy punished every indiscretion.

It wasn’t long though before Lucan responded. 14 broke through the cover and levelled the game on 13 minutes. Cuala were stunned. Lucan hit three more frees to leave the Westies 3 points to the good. There were a lot of worried faces on the Cuala line, but they knew that these guys are made of stronger stuff. Up stepped Stevie McDonnell with a trademark goal. He followed in fearlessly after a high ball and in a flash the sliothar was in the back of the Lucan net. Back to level again! Lucan responded with two frees. Some wonderful midfield play from Mark O’ Treasaigh saw him slot over a point from play on 26 mins. Two more Cuala points followed, one a marvellously struck ‘65 from Fionn O’Drisceoil, and the half concluded with the Dalkeymen up by the minimum, 1-8 to 1-7.

In the team huddle at the interval, the lads were told in no uncertain terms what was needed in the second half: a tenacity and determination that surpassed the mighty efforts they’d already shown this season. However, even the most passionate words can take time to sink in. Cuala started flat in the second half – not their usual modus operandi! Lucan scored five points to only one for the Reds in reply. The Centre Back for Lucan was beginning to dominate from the centre of the field and driving long-range missiles into the Cuala full-back line. Greg Sheehan, Danial Johnson and Jack Hartnett were sprung from the bench and had immediate impact. Hartnett’s physical presence quelled ‘Dowser’ the Lucan number 6. Sheehan hammered over a delightful point and Johnson was back to his industrial self around the middle. Two Emmet Murphy frees pulled the Dalkey side closer and then the break that has been eluding them all year, arrived with aplomb. Again, Emmett Murphy was waving the baton. He floated a high ball into the Lucan square. The Lucan keeper committed the cardinal sin of stopping the point but batting the ball back into the danger area. Man-of-the match O’Treasaigh pounced and with one left-hand swipe of his hurl, he fired a rocket into the back of the net. The Reds never looked back. A massive team effort concluded with a 3 point win.
Final score: Cuala 2-12, Lucan 1-12, and hello Division 1 next year. Manager Finbarr Murphy was drowned in water at the death!

Footnote: Cuala’s final score difference is remarkable in that their scores against is by far the lowest of all the teams in the League. This demonstrates the magnificent performance of the six backs and the goalkeeper right throughout the season.