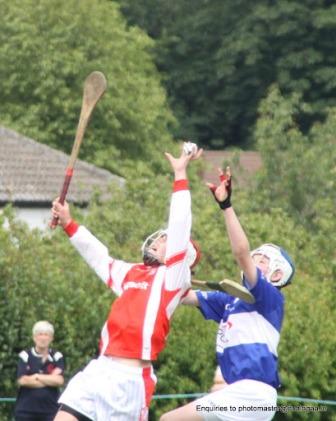 You don’t get many days like this, when everything clicks into place and every touch of the ball turns to gold! Cuala’s U14 hurlers put in a performance against St. Judes in Tymon Park that one could only stand back and admire. All but one of their scores came from play in a daunting display of skill, teamwork and clinical finishing. At the end of the game, the Jude’s mentors were so impressed at what they saw, they came over to express their disbelief that Cuala were not heading up the division such was the quality of the display.U14 LEAGUE DIV 2 – Saturday 6th September 2012, Tymon Park

A warm, bright Autumn day was the backdrop to this match with little or no wind. Even from the warm-up it was clear that the Cuala outfit meant business. Within a minute of the throw-in Fionn Myers had one on the board, by 2 minutes Steven ‘Golden Goal’ McDonnell hit a rasper to the roof of the net with his first touch following great teamwork from Diarmat Maas outfield and Michael Wylde in the corner. Myers was enjoying the freedom of the park as he wandered out in front of the big Jude’s fullback and collected another sweet point a minute later. Almost immediately he dived on another loose pass and struck from long-range. The ball beat everyone in the square and nestled in the back of the net. The Judes’ players had hardly broken a sweat but still found themselves 2-2 down! On 7 minutes, Maas won a ‘dirty ball’ around the middle, soled his way through two tackles and hit a sweet ball over. Wylde took a pass from Oisin Marray, turned his man and ran on goal. As the cover came across, he slipped the ball to Emmet Murphy who doesn’t miss. The Reds were 3-3 up and the sliothar hadn’t crossed the half-way line! Cuala were in the ascendancy all over the pitch and their appetite for the ball was tremendous to watch. There was no sense of ‘blasting’ the ball into the forwards, every pass was measured and placed in front of the forwards. Wylde, Myers and Murphy thought all their Christmasses had come together. The Crumlin referee felt the need to help the Templeogue outfit and awarded three frees to make a game of it. Cathal O’Floinn responded for the Dalkeymen with the point of the game from way out on the right-hand touch-line. The St. Judes managers were in awe of that particular score! At the interval the score was 3-5 to 0-3 in favour of the Reds.

The re-start saw no change in the play. James Murphy, Fionn ‘The Beast’ O’Drisceoil and Oisin Marray were impenetrable on the half-line with midfielders Diarmait Mass & Thomas McCarthy  again bossing around the centre. Mickey Wylde was turning his man every time the ball was played in front of him and playing other teammates into scoring positions. It was a joy to watch. Within 2 minutes Steven McDonnell followed in on a goalkeeper’s save to hit a ground shot into the open net. The Judes players knew the game was over – Cuala had a lead of 4-6 to 0-3. The sublime Brian Coronella, the outstanding Conor Newman and the ever-reliable Tiarnan Lane in the full-back line were mopping up any smell of danger. Ryan ‘Freezer’ De Felice was on top of his game in nets. He made two excellent saves late-on from long-range efforts that came through a crowded square. The one goal conceded by the Reds came off a 14m free 5 minutes from the death, and even then De Felice nearly stopped it. Greg Sheehan tidied up proceedings when placed for two lovely points and Steven McDonnell rounded off a wonderful team display with a well-taken point. The game ended on a score-line of 4-11 to 1.6. Fionn Myers’ tally of 1-5 from play was another highlight of what was a great game.

Footnote: With one game to play, Cuala are now placed third in the League behind Fingallians and Lucan. Lucan lost to St. Sylvesters, so if Cuala win the last game and Lucan slip up, Cuala gain promotion to Division 1 because of their far superior score difference. They entertain St. Sylvesters at home on Saturday week 20th October in the last game of the league. It’s bound to be a cracker!

Next up: St. Sylvesters at home on Saturday 20th October, Thomastown 3.30pm.