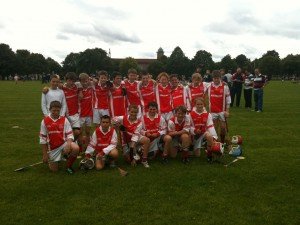 U13 hurlers at the PJ Troy tournament in Whitehall

The U13’s entered two teams in this year’s renewal of the PJ Troy tournament.  The Red group played in Division One at Whitehall’s home base where they came second in the group behind the host club and ahead of Kilmacud Crokes who they beat along the way.  Whitehall went all the way to the final but had to give second best to St Vincents.

The Blue group took part in Division Two at Thomas Davis and won three of their four games, against Commercials, Liffey Gaels and Lucan Sarsfields B to top their section.