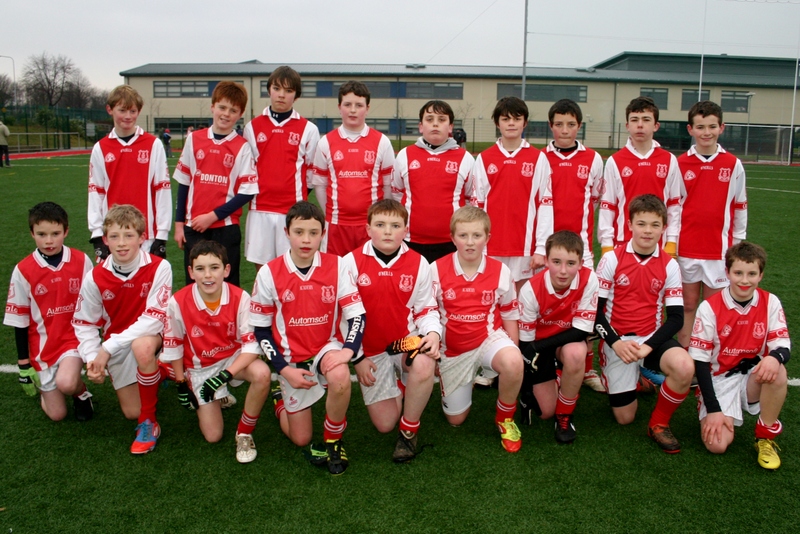 The wait was over. A chink in the weather finally allowed the first of the grading matches to get underway. The lads that studied Hill 16 were quick to tell us that this was a must win game; the opposition Oliver Plunkett on form looked to be our weakest opposition.
The pitch was heavy and wet, not a day for silky flowing skills. From the start, the lads battled hard, wining ball. During the first half, the ball rarely came in Cuala’s half. Ruairi and Cormac and Sean linked up some beautiful passes; yet despite dominating the game with skilful display, our team found it hard to get the points on the board. Step up Daire, who put two no nonsense splitting the posts points over the bar and the log jam was broken. Their goalie kicked to the centre, and Tadgh, Liam and Michael with darting runs feed the ball in to Daniel Bailey and Jack. By half time, the lad’s tail was up, and we were dominating play and the score was 8 points to nil. There were a few points that needed to be worked on; getting up for the high catches, and with the fifty fifty balls, bending the back to get our hands on the ball.
Our backs had little to do in the first half, but when the passage of play changed for a while, Calam, Eoghan, Daniel Drummond were in front of their man, battling and winning the ball. The game moved once again to the middlefield and the forwards. James scored two lethal goals, with such force that I felt sure their goalie turned away. Darragh silenced the coaches that were screaming for him to feed the ball in, with a silky display of side stepping two defenders and scoring a wonderful goal from a tight angle.Tadgh scored an incredible goal in the top corner from a free. The score was4 Goals and 14 Points to Cuala against 4 Points to Oliver Plunkett.  Calam was singled out for his determination and commitment though out the game and was nominated Captain for the next match. 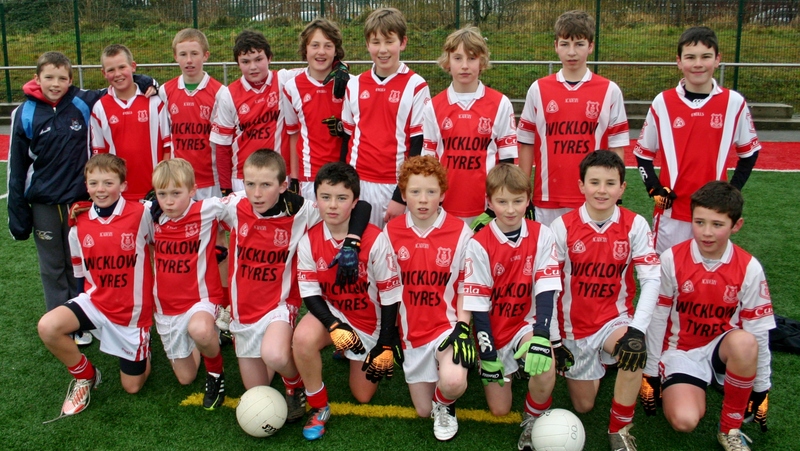 When no less than 20 lads togged out for the Cuala U13 B match versus Parnell’s it was clear that Cuala were going to take all the beating. That the match was to be played on Parnell’s brand new all weather pitch at Chanel Park favouring  Cuala’s brand of free flowing, passing football, the mentors were optimistic of a good showing from the Cuala lads. So it was to prove as a major feature of the game was the way the Cuala 15 moved the ball up the pitch with a series of hand passes and accurate kick passes. Parnell had no answer to Cuala’s play but certainly battled hard for the full hour. In fact  Parnell’s started the stronger and the Cuala back line of Kevin, Ben and Aonghus had to hold out for the first five minutes until Cuala got into their rhythm. During this period Darragh in goals was called on a number of times and he wasn’t found wanting.

Having  weathered the initial storm the Cuala goal machine moved into action. With Ronan at full forward scoring goals for fun, Cuala started to pull away. Lawrence in the corner (decked out in brand new gumshield) was giving his marker a torrid time and contributed a brace of points in the first half. Niall, going for goal saw his shot flash over the bar for another point for Cuala. The lads weren’t having it all their own way as Parnell’s were scoring on the break. However with Mike and Harry lording it at midfield, Cuala went in at half time ahead by 4.

Cuala started the second half brightly with Conor, Oscar, Richard and Shane  adding fresh legs and with Callum adding 3 points it looked as if Cuala were home and dry. However Parnell’s had other ideas and they had their strongest period of the match. They managed to close the deficit and even went 1 point up.

But Cuala didn’t panic. Greg, Jim and Patrick in the halfback line rolled up their sleeves and repelled  all raiders. Patrick seemed to have glue on his gloves as he didn’t drop a ball all day and thoroughly  frustrated his marked. With the space now opening up Jack took full advantage and covered acres of ground running at  the Parnell’s backline. The passing between the half forward line of Jack, Adam and Ciaran, with Mike following up from midfield, was creating chance after chance  for the Cuala forward line. These chances were being taken and Cuala ran out well deserved winners with a scoreline of 6 -7 to 8 – 11.

Clearly Cuala’s training regime is starting to pay off as the fitness of the Cuala lads, their crisp passing and all round teamwork and support for each other was a feature of this well deserved victory. It was impossible to pick a man of the match as it was truly a team effort which won the day.