When I first thought about the words “GAA” and “Social” naturally, I thought about the beautiful game and socialising with people of the same sporting demographic. I also wondered why it wasn’t a more popular practice, it seemed like a great idea to me. But the more I thought about it, I wondered what it entailed. Did we play GAA from morning to evening and hope to have made some friends by the end of the day? Little did we know that we would be leaving UCD that day with more than just GAA on our minds. 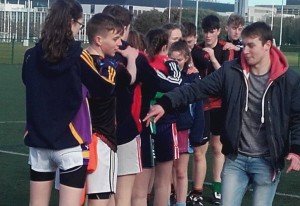 Though the day may have started on an awkward note, the icebreakers, ball games and football matches soon eliminated that feeling. Undoubtedly, the games were a central and essential part of the day, but they weren’t what resonated most with players. That credit is due to the three very impressive guest speakers who addressed us throughout the day.

Alex Brock, a successful senior footballer with Cuala GAA Club was the first guest speaker of the day. He told us about himself and his sporting career so far and read to us a letter he wrote to his 16 year old self. He recounted his experience of his teenage years right into his college years along with thoughts, opinions and advice he would have given himself as a 16 year old. He told us about the Leaving Cert, college and inevitable decisions we’d all have to face, but most importantly he urged us to be accepting of others and not to be judgemental of others. Alex certainly succeeded in inspiring us to think about our futures and in giving us a few hints as to what to expect in the years ahead- words I’m sure we’ll come to appreciate in the near future.

The Second guest speaker of the day was a lady named Hannah Tyrell a highly successful rugby player with Irish Ladies’ 7’s team. She began her talk by telling us of her awe-inspiring sporting career and accomplishments in many different sports- not just rugby. It soon became apparent that Hannah was much more than a strong athlete, but that she possessed the bravest and most courageous character too.  She told us of her battle with mental health throughout her teen years and early twenties. Hannah assured us that help is always available and that there are always people who care and who are willing to listen. Her message that ‘this was not a battle that had to be fought on your own’ was extremely important. The total silence in a hall of usually noisy teenagers was great testament to the impact that Hannah had on every single person in Astra Hall. Her bravery and courage was a source of inspiration to all.

The final speaker of the day was Ger Brennan, a recently retired defensive force of the Dublin Senior Football Team. Ger told us about his life, sporting career and education-with the focus on his teen years. His depicted these years with utter truth and humour, drawing many laughs and smiles from the audience. The reaction from the audience confirmed that his experiences were very similar to what they were seeing daily. Though he laughed about it, he was serious when he advised us to remain focused on our hobbies and studies while still enjoying life and having the craic. These valuable words were sunken in a little deeper by such an influential character. Ger finished the talk by informing us about scholarships available from the university recognising sporting talents.

It was clear from the reactions of everybody who took part that the GAA social was a success. The hard work of those who organised it definitely didn’t go to waste. The day was “good craic” but the guest speakers had the greatest impact, as inspirational people who have put those years behind them took the time to talk to young people about the challenges ahead. I’d like to take this opportunity to thank all those involved in organising the event. We certainly left UCD with a greater knowledge of what to expect of the years ahead, how sport can help cope with the challenges we’ve to face, some new friends and a new experience.