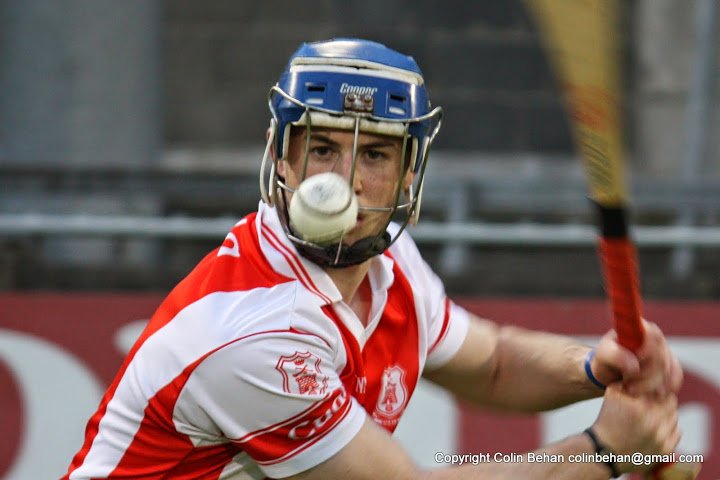 A scintillating 8 points from Championship debutant Seán Treacy lit up the darkness on a dark, overcast night in Donnycarney. Four classy points from play from way out on the left, and a monstrous 80m free, were the highlights of this almost flawless display. But it was the work-rate, the endevour and the never-say-die attitude of this Cuala team, particularly in the closing quarter, which saw them through to the last 8 of the 2014 Dublin Senior Hurling Championship.

Both teams started nervously. Cian Waldron opened the Cuala account. Mark Schutte added to it. Diarmuid Connolly for St. Vincents was prowling around the square. Hetherton in midfield was marshalling the skies. He drove one in, and Connolly didn’t take long to remember how to play Hurling! He scored a beauty out on the left. Mark Schutte up front for Cuala responded. Hetherton chipped in with another for Vinnies, Treacy responded with a score way out left, in under the stand. Both teams were trying to find their rhythm, but the game was tense and nobody wanted to make a mistake. Nip and tuck all the way, point for point, man for man. Vincents went up 2. A long delivery from his brother Paul found Mark one-on-one at full-forward. There was only going to be one winner. He eventually kicked a ground ball to the net to put Cuala up 1-5 to 0-7. Another brace from Treacy & Carty and Cuala pulled away by three. Vinnies caught a break on 22 minutes. Connolly was becoming a nuisance for the Cuala rear-guard. He had already troubled the scoreboard three times. O’Callaghan was getting annoyed and fouled him 30m out in front of goal.  Hetherton stepped up and blasted one of the most explosive shots ever seen in ParnellPark to the Cuala net.  Such was the speed of the shot, the Reds on the line didn’t even move! Paul Ryan, T J Reid and Anthony Nash were left in the ‘halfpenny place’ with this one. Vinnies‘ tails were up, but Schutte and Treacy up front were immense all through and wouldn’t allow Vincents break away. The teams went in for the oranges on parity 1-10 apiece. All to play for in the second half.

Changes were needed in the Dalkey camp. Hudson was called into action to replace the injured Seán Barron. Cian O’Callaghan moved to full-back on Connolly with devastating effect. Simon Timlin took on Hetherton and his dominance at mid-field wained. He was left feeding off dead-ball scraps.  Cuala pulled away.  Points from Treacy and Schutte put daylight between the teams again. A long delivery from Cian Waldron 7 minutes in was batted by Manning but somehow found its way to the roof of the net. Timlin stormed down the middle and took a great point from 40m. With 15 minutes to go Cuala were 6 ahead and Vincents were desperate for a goal. Cuala’s half-forwards and mid-fielders now came into their own. They began to close down the Vincent’s half-backs and fought like tigers for every ball. Cronin, Sheanan and Butler would not allow the backs to clear their lines. Waldron and Carty worked their socks off and eventually, ball into the Blues’ inside forward line dried up. O’Callaghan had the measure of Connolly. Rob Reid followed McGrane down the right and waited. Just as he pulled the trigger, Reid put his hurl into the engine and the ball squirted harmlessly wide. Alan Moore came in for Tomás Connolly and made an immediate impact. A scrappy goal gave Vincents heart and the Dalkey line were back to biting their nails again, but two more great scores from Cronin on the right and Treacy on the left settled the nerves. Again Vincents came back. Hetherton hit a screamer of a side-line cut over from distance. With time running out, O’Callaghan made two brilliant interventions and kept a cool head in the heat of battle. O’Brainain behind him made a critical save with his foot. The dam held! The referee called time on a score-line of 2-18 to 2-14. Cuala march into the quarter-finals.

After two rounds, Cuala have a great chance of heading the group and are definitely into the last 8 of the Championship. They have one group game to play against Craobh Chiarán in September. Parnells are in second place on 2 points with St. Vincents and Craobh Chiarán on 1 point each.

Footnote 1:  Afterwards in the dressing-room, it was nice to hear Mattie Kenny and the team wish Treacy & Braine well in the upcoming Leaving Cert. Great also to hear the few words from St. Vincent’s bainisteóir Ciarán Barr.

Footnote 2: A fine win by Parnells over Craobh Chiarán in the opener at ParnellPark means that they will go through to the quarters if they beat St. Vincents in September.

Next Up: Both 2nd and 3rd Adult Hurling teams have Championship games this weekend. Senior hurlers will play their final group game in the Championship against Craobh Chiarán in September. In the meantime the Adult Hurling League matches resume with an away game in Lucan at 6.30pm on Saturday 24th May, and home game against Ballinteer at 6.30pm on Saturday 7th June. Cuala’s Dublin contingent resume county duty with Anthony Daly.