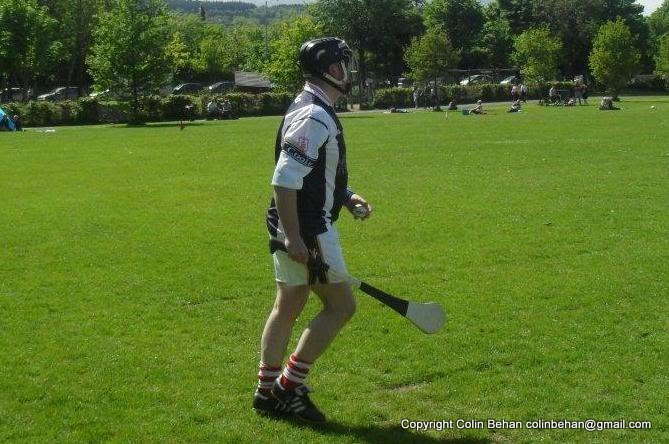 A battling, spirited performance by our adult 3rd team hurlers against table-toppers An Realt Dearg, was not enough to take the spoils in this entertaining, open contest in perfect conditions on Sunday 26th May in ShanganaghPark.

With the strains of “Abide with me” coming from the Shanganagh Cemetry Service at the Bray end, Cuala might have been distracted as the classy Rathmines side broke through for a goal after 2 minutes. That was the easiest score the Dearg side would get for the rest of the day. Denis Monaghan was immense at full-back and was inspirational as the anchor at the back. Conor Hayes, Jack Butler and Neil Kelly never gave an inch. Canice Dowling in nets was solid as a rock, pulled off a number of fine saves and added 1-1 to his account, both from placed balls. Mattie Higgins and Dylan Kennedy worked their socks off around the middle and Colin Jones and Simon Cullen added strength down the middle of the attack. It was a nice mixture of old and new with some seasoned hurlers mixing with some Minors to produce a wonderful display.

Cuala settled after the initial set-back and set about getting ‘stuck into’ this internet team. With the ‘Brothers Monaghan’ driving them forward, the battling to win the dirty ball, the blocking and hooking around the middle led to turnovers. But with 6 regulars missing, they hadn’t the fire-power to punish up front, and posted seven long-range wides in the first half, when low balls in to Cullen and Brennan might have been the better option. The Realt Dearg team, however, are a well-balanced outfit with big physical men on every line. They could all hurl. Their man patrolling the centre-back berth would grace any senior team in Dublin. Cuala came in at the break 0-3 to 1-7 down.

The re-start saw the Dearg side hit a point within a minute. Cuala responded with Conor Bass, Colin Jones and Cormac McDermott beginning to get on top on the half-forward line. Shane Bass came in and had an immediate impact. He took a ball on the right, went passed two and struck for goal. The keeper deflected it back into play. Cullen pulled on it but couldn’t get the ball into the onion sack. The ball was cleared down the middle. Up stepped Ed Monaghan from the back to catch the clearance. Like a scene from Braveheart, he charged down the middle at pace and tucked a lovely point over to give the Dalkeymen hope. Conor Bass took another. A high ball into the full-forward line was pulled in the air by Cullen but was cleared. The pressure was on the Rathmines outfit, but they continued to hold out and clear ball up field. But holes were appearing at the back, and Dearg clipped over some fine, long-range points to maintain their lead. With 5 to go, Bass was upended when he was clear on goal. The man with the most powerful strike in Cuala sauntered up from nets. The Realt Dearg players didn’t even see it as it burst through the cover. 1-6 to 1-12, but time was running out and Cuala had put in some effort to keep the battle raging. Ultimately, the reds ran out of energy and Realt ran out winners on a score-line of 1-7 to 1-15.

Footnote: Realt Dearg is the first ‘internet’ hurling club this reporter has ever heard of.  Apparently the team was formed 2009 after internet ads were posted looking for players living in the Rathmines/ Terenure/ Ranalagh area. From this display, there must be a number of very strong players out there waiting to be tapped!

Next up: After three games, Cuala have nothing yet on the board, but on the evidence of this  gritty performance, there will be better days ahead. Next League game is against Whitehall-Colmcille in Cloughran, Sunday 9th June 15:00.