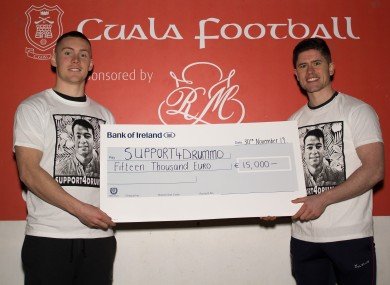 The following article was originally published by www.42.ie and can be found HERE

IN SEPTEMBER, IT was revealed that Con O’Callaghan was lending his support to a Cuala clubmate in need.

Sean Drummond, 24, was left with a traumatic brain injury (TBI) and multiple skull and facial fractures when he was knocked down during an accident in London on 23 March.

At the time, he was looking forward to taking up his “dream job” at Amazon Web Services upon completion of his Masters degree in Artificial Intelligence.

Instead, Sean had to undergo surgery to insert plates into his skull.

Dublin star O’Callaghan offered to auction his 2019 All-Ireland final jersey in the hope of raising funds for his team-mate.

Today, the 23-year-old handed over a cheque for €15,000 to Conor Mullally, a friend of Sean and chairperson of the ‘Support4Drummo’ campaign.

“We cannot thank Con enough for this extraordinarily generous gesture,” said Seán’s father, Tommy Drummond. “We have been overwhelmed by the incredible support shown for Seán by his clubmates at Cuala and by the wider GAA community. We would also like to thank our family, friends and business community who have been so kind and supportive. 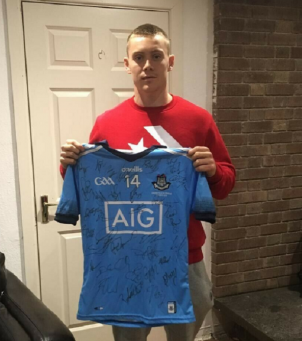 “Seán has a long, hard road ahead, but with the support of his friends, family and the GAA we hope he will be able to return to the life he once imagined for himself,’’ added O’Callaghan.

A brilliant gesture for a more than worthy cause.

To donate to ‘Support4Drummo’, go to the GoFundMe page

Preparing for the upcoming Cuala Community 5K
Scroll to top