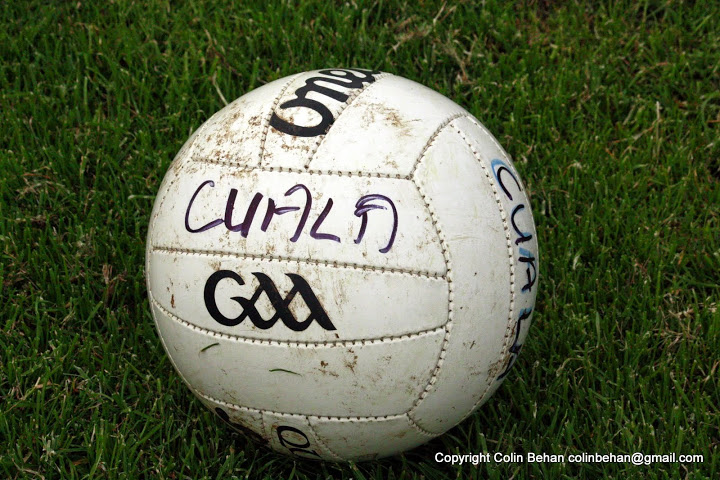 Every year when summer hits it becomes more of a struggle to find 15 ladies to be able to field a team and this evening was no different.  With at least half of the team away we were left to call upon the minor and U16 girls in the club.  Responding to last minute phone calls, the girls got their gear together and stepped up ready for the challenge, for some it was the first time playing with the ladies team. In truth, without the assistance and support of the minor and u16 girls it would be no way possible for us to field two ladies teams this year.

Getting to St. Annes was the easy part, finding pitch 13 however proved to be somewhat problematic!!!  With most of the team waiting in the club house, the jerseys were stuck in rush hour traffic…… whoever has the jerseys always seems to arrive last!!

With Siobhan unavailable, John on his travels and Alex stuck in work, Mick was excited about the plans he had for the team. Scoill Ui Chonaill were short a few players and Mick agreed to playing 13 a side.  This left Cuala with 2 fresh sets of legs on the side line but more importantly showed a touch of true sportsmanship.

A slightly unprepared team lined out.  Cuala took possession of the ball from the start, winning the throw-in.  It wasn’t long before Scoil Ui Chonaill turned the ball over and got the opening score of the game, a point within the first minute.  First reactions and thoughts were Cuala could be in for a right beating in this game.  However the girls got themselves focused and held a lot of possession as the ball was played without score for the next 6 minutes.  Aoife Mc Govern opened the score line for Cuala in the 7th minute with a quick kick of a ground ball passed the keeper, which seemed to roll slowly across the line.   Cuala winning the kick out, were on the attack again, this time Cathy Brock running fast scoring a beautiful goal that slipped just under the bar.   At this stage you could see the frustration start to kick in for the Scoil Ui Chonaill Ladies.  Cuala winning the next kick out, attacked hard for a third time, resulting in their first point of the game from midfielder Doireann McMahon.  Their 3rd score in a minute of play.  This was the turning point of the game and Cuala showed they meant business.  Martha Byrne, feeling a little tired after the Dublin Leinster Championship win the previous day, took a moment to raise awareness for the “lace up for a cure” campaign as she got the ref to tie her pink laces.  Scoil Ui Chonaill never stopped trying to attack hard, but the full back line of Carla Fenton and Sarah Egan, with the constant support of midfielder Jess Tobin, proved too skilful constantly turning over the ball.  I don’t know how Jess does it but she always seems to be the one swooping in to pick up all the loose play.  Scoil Ui Chonaill went on to hit 3 wides as a result of the pressure they were being put under by the Cuala defence.  It wasn’t long before Cuala were on the attack again with Martha Byrne scoring 2 points, resulting from the tremendous work effort of Siobhan O’Kelly, proving to be more of a handful for their number 13, while attacking from wing back.  The hard work from Cuala paid off with another goal from Laura Rooney in the 18th minute.  It was towards the end of the half when Scoil Ui Chonaill got their second point from a free, having played hard without any reward for 25 mins.  This seemed to boost their confidence as they came determined on the attack, Eimear Huggard made a fabulous save but the force of the kick was too strong and the ball went over the bar.  Cuala’s response was to show just how hard this team works together, with a point and goal scored by none other than Cathy Brock.  Cuala finished on the up at half time with a scoreline of 4-04 to 0-03.

The Second half started with a more determined Scoil Ui Chonaill, winning the throw-in but kicking wide.  Cuala responded a couple of minutes later but this also resulted in a wide.  Cuala seemed a little slower to start the second half, but after a few minutes Aoife McGovern was on target and put the ball over the bar.  5 mins into the second half, Scoil Ui Chonaill’s corner forward, taking full advantage of Cuala’s slow start, got through the defence and found the back of the net.  This woke up the Cuala Ladies and for the next 7 minutes the work rate spiked and Cuala got score after score.  It started with a point from Blaithin Lane, which she followed up 30 seconds later by a goal.  A minute later Cathy Brock scored a goal.  Martha Byrne must have felt left out and buried the ball in the net.  Cathy Brock was straight in with a point, Martha Byrne followed with a point. Blaithin Lane decided she’d have another goal.  Doireann McMahon, wanting in on the action, sent the ball over the bar.  This side was unstoppable.  Determined not to go down without a fight the Scoil Ui Chonaill Ladies launched an attack at the Cuala defence.  Their Corner forward, proved to be a right handful, as she made it past the defence again, it was one on one with Eimear Huggard who was unfortunate to foul her… resulting in a penalty.  The ball just wasn’t going the way Scoil Ui Chonaill wanted and the penalty was kicked wide.  Things settled down again for a few minutes but Scoil Ui Chonaill just couldn’t seem to get passed the Cuala half back line where it seemed Emma Schutte was plucking balls from the sky.  It wasn’t long before Cuala were back on the attack.  The constant support play from Leonie Buckley at wing back lead to another spree of points.  Doireann McMahon put the ball over the bar, followed by Blaithin Lane with 2.  One of the newest recruits to the game Kate Curtin, played a key role in the forward line delivering the balls in that lead to a lot of these points.  Scoil Ui Chonaill responded with a point that would be their last score of the game, thanks to the impact corner forward Laura Dunne was now making as full back.   In keeping with the consistency of responding to these scores Cuala finished putting another 3 points over the bar.

This result leaves Cuala sitting second in the Division 4 League, having delivered the biggest score of their season so far.