What a fantastic weekend for the Juvenile Girls section in Cuala with not one, not two but three trophies being collected in venues around Dublin this weekend. 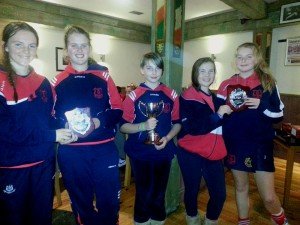 First up were the under 14s who contested the u14 Division 3 Shield against a strong Thomas Davis side who were playing on their home turf.  The Cuala girls led from the beginning and enjoyed a comfortable lead at half time.  Thomas Davis fought back  bravely in the second half but could not catch up on a strong Cuala team performance.

The under 13 girls played in their first championship final today and continued the winning run for Cuala. Playing in somewhat windy conditions in Trinity Gaels they beat a strong Naomh Barrog team by a score line of 4g 2p to 2g 1p.

With two trophies secured all eyes were now on the under 15s who were contesting the division 1 shield final in Phoenix Park. The 98s did not let us down and in a thrilling encounter with Good Counsel they came out winners on a score line of 4g 2p to 1g 8p. Huge credit to this team in particular who only progressed to division 1 this year.

We must not forget our Minor girls either.  This group, who spear headed the introduction of a Minor development league in 2013 reached the final last weekend and were unlucky to be beaten on the day. 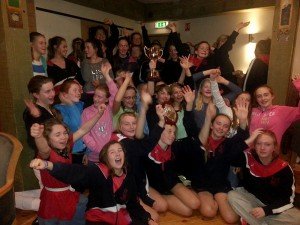 Well done to all the girls, parents and mentors.  The future for camogie in Cuala is secure. good.