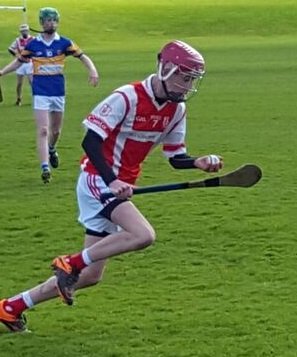 Sometimes in sport you simply have to stand back and admire greatness on the field of play. In this case one player was the complete difference between these two wonderful hurling sides. A virtuoso performance from Castleknock’s no. 11, one Luke Swan (remember the name!), was the only difference between Cuala and table-toppers Castleknock in this lively and entertaining game played in excellent conditions down by Dublin’s picturesque Strawberry Beds. Despite the constant attentions of six of the Cuala rear-guard, he bagged a total of 4 goals and a number of well taken points. But it was his devastating hat-trick of goals in the second half between the 40’ and 50’ minute that put Cuala to the sword.

Cuala were outstanding in the opening half and led by three after the first quarter 0-4 to 0-1 with points from Malone, O’Toole and two from Hayes. Cuala play a wonderful style of hurling with fluid passing movements and stylish play. Castleknock’s defense was rock-solid. Swan’s first goal was a devastating blast from 25m which was in the roof of the net in a blink of an eye. But Cuala didn’t flinch. Good play by Malone and Tobin saw a delivery into the red-zone that was only half cleared by the blue-and-gold full-back. Carey pounced. He had his first shot blocked but followed to the net with the re-bound. Cuala were again up by three 1-6 to 1-3. Castleknock finished off the half with a flourish leaving nothing between the sides 1-7 apiece.

The Cuala lads are still trying to work out who ‘ruffled the feathers’ of Castleknock’s “Joe Canning” and caused him to play out of his skin in the second half! Swan played like a player possessed. Cuala had two and three players trying to deny him possession but his class couldn’t be contained. Ruigrok in nets made two magnificent saves to deny him early on in the half, but on 40’ minute he got the break-through. He closed in on a loose ball in the danger-zone and would not be denied. Two more followed and Cuala were left reeling on a score-line of 1-9 to 4-13 by the 50’ minute – a devastating ‘purple-patch’ from Swan. To their credit Cuala never gave up and had the upper hand in the final quarter. But the rear-guard defense from Castleknock was successful and Cuala were now hunting goals. In the dying embers of the game, Cuala began to drive at the heart of the Castleknock defense with Malone, O’Toole and Hayes to the fore. But their efforts were cut down mercilessly. With the resulting frees, Malone battered the ‘Knock goal-line but the line held. The referee called a halt on a score-line of 1-10 to 4-16. Despite the defeat, it’s great to see a new hurling talent come up through the ranks. Next up: another table-topper on Thursday next as Cuala travel to play Lucan.