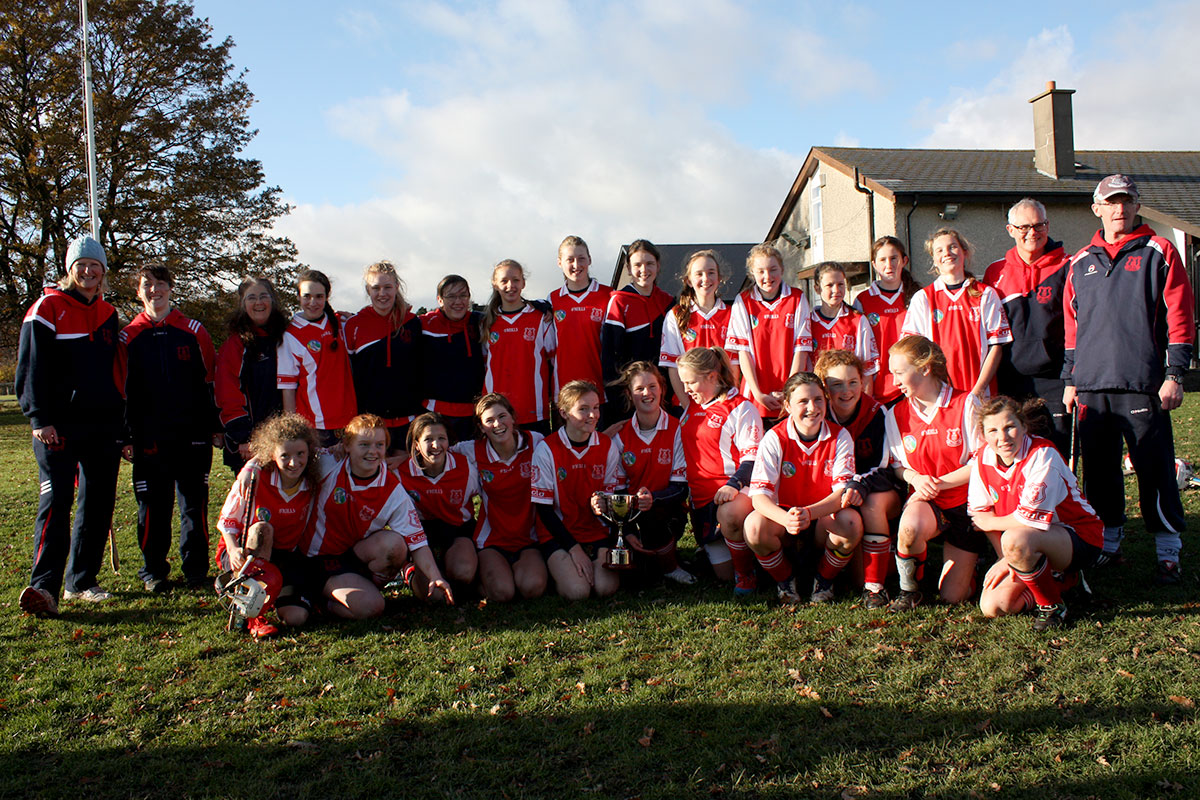 The wins are two more important milestones for the resurgence of camogie in the club – these groups will be the bedrock of our re-emergence into the minor and adult ranks over the next couple of years. The Under 16 win was a great reward for a group of loyal players who have battled hard over the year and this was their first title – also a day that should be dedicated to Fintan Quill who has been the spiritual leader for this team since their Academy Days and an inspiration to the rest of the Juvenile Girls section.

Meanwhile out in “the Park”, the Under 14s beat Plunketts by 3-4 to 1-4 having played out ding dong battle on a sticky surface on the Army Grounds pitch. The teams exchanged early points (a Sinead Murphy free for Cuala) before Plunketts fired home the first goal of the game, and a point, to really make their mark on the game. Clodagh Sheehan in goal, whose puckouts to the opposing 65 were already subject of rave reviews from onlookers, then pulled off a superb reflex save to deny Plunketts what looked like a certain goal.

Plunketts were on top at this stage but this Cuala team has really focussed on playing the next ball and not worrying about the scoreboard. Driven from the back by strong and determined defending and crisp long striking from Catherine Garner and Blaithin Lane , Cuala launched a wave of attacks one of which ended up with a finely taken Sinead Murphy goal. Cuala heads were up now and with Hannah O’Dea and Niamh Collopy showing great pace and athleticism around the middle of the field they dominated the remainder of the half and got their just rewards with a “pushover” goal – neither debate nor video analysis proves whether Amy Donnelly or Keela Sexton got the final touch but it is fair to give them both credit for it as a reward for their hard work and graft in the forward line. Holly Heffernan and Cliona Dorman were equally ensuring that the first line of defence was the Cuala forward line.

At half time the attitude in the Cuala camp was positive on the back of a 2-2 to 1-2 lead – but the players and mentors knew there was a long way to go as all of our games against a sporting and competitive Plunketts side have gone down to the wire. Cuala introduced ‘99 player Jennifer Dunne at half time and she played out a super second half winning a lot of ball in the half forward line and delivering into the full forwards. Cuala again had the lion’s share of possession but the early part of the second half saw points exchanged by both sides – two fine scores from play for Cuala from Sinead Murphy (to complete a total of 1-2 from play and all off her “weaker left side”) and a superb solo effort from Hannah O’Dea, who carried and struck on the move from a distance. But Plunketts were not done yet and their own scores in reply were finely taken to leave the game balanced at 2-4 to 1-4 heading into the final quarter. At this stage the Cuala corner and wing backs Eleanor Moore, Dervla Madden, Grace Hazley and Anna Moran were battling for every ball like their lives depended on it – and after a heartbreaking defeat a few weeks back for this group in their football final, this spirit spread through the team. In particular, Grace and Anna, two players who have worked very hard on their game over the last year, showed brilliant grit and determination.

Brid O’Donnell was now in corner back and she added her usual determination to the defensive efforts. The noise levels were now up with a large Cuala crowd giving the girls the support they needed and deserved. Blaithin Lane was hurling well at midfield and Hannah O’Dea was continuing to cover every blade of grass on the field. Meanwhile, in the corner, Sorcha Barron, who had been finding space difficult to locate, decided enough was enough and it was time to close this match out. So with 5 minutes on the clock she pounced on a loose ball and struck home a shot of such ferocity that most supporters simply saw the net bulge. A superb score, and a great reward for a player who has worked very hard all year, and the score that gave the Cuala contingent breathing space for the first time that day.

At this stage Rebecca Beggins was in at corner forward and was working hard along with the other forwards. Despite the 6-point deficit Plunketts were not done and they launched attack after attack – most of which were single handedly repelled by Anna Moran who got no less than 5 blocks in quick succession in the last 5 minutes – if anything summed up the Cuala spirit on the day it was these blocks from Anna.

After a few minutes injury time, from a very fair referee in Brendan Cooper, the whistle went to scenes of joy and relief in the Cuala camp. After a long year of training in Meadow Vale, Loreto, the Hall and the Glasthule ball alleys, the girls got their just rewards with a first camogie championship title for Cuala since the establishment of the Juvenile Girls section and the resurgence of our camogie teams.

Special mention also for Clodagh Dalton, Cara Sullivan, Orlaith O’Sullivan and Alison Slowey who did not get a run on the day but were very much part of a 22-player squad effort throughout the season.

Joint captains Clodagh Sheehan and Sinead Murphy raised the trophy and a very fitting presentation was made to Hannah O’Dea as player of the match. This was a reflection not only of Hannah’s incredible performance on the day but also of what she has brought to the team and the club over the last year in both camogie and football.

So the renovations meant the trophy could not be brought back to the Club (the girls will do that soon !) so the Sheehan’s house provided a very suitable alternative for a very enjoyable evening for players, mentors and parents. Thanks to Siobhan and Terry.

Its onwards and upwards for this group with camogie league titles still to be fought for by both the 1998 and 1999 groups.

A great day that all involved with the team will remember for a very long time. 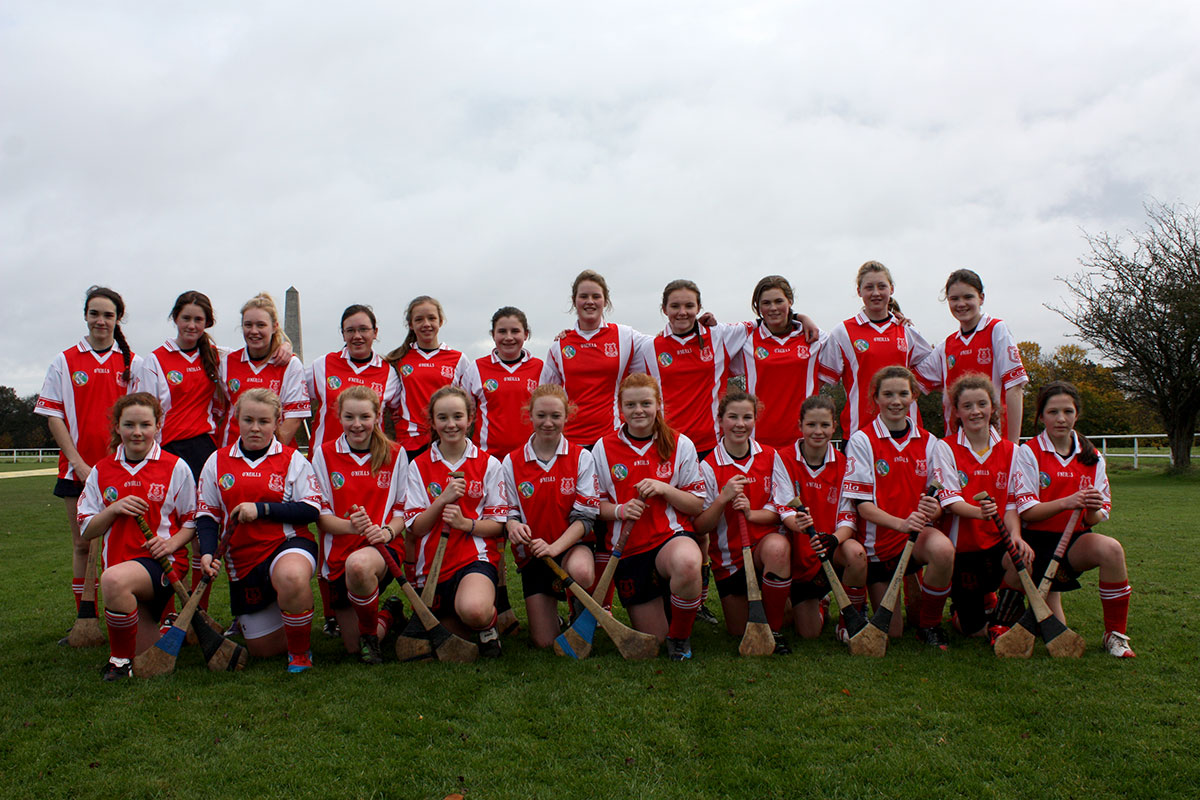