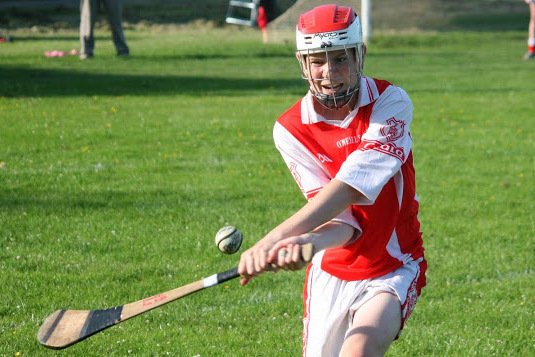 A superb first half performance by Stevie Mc Donnell was the platform for this emphatic win. He scored 1-6 from play and took the man-of-the-match award by a country mile. Cuala’s Minor B hurlers finished off their League campaign with a very comprehensive win over St. Brigids in Russell Park, Blanchardstown. Cuala now sit proudly on top of the League ahead of Rialto Gaels, but only on score difference. The support of the U16 hurlers was critical in helping the Minors take League honours with no less than 10 players playing up a level.

From the throw-in McDonnell showed that he was in the humour to do damage. He skinned his man twice for a brace of points early on, before cracking home a screamer of a goal in the 15th minute. Karl Wolohan and Diarmait Maas controlled the middle of the field and the halfback line of Josh Byrne, Fionn O’Drisceoil and Cathal O’Floinn cleaned up any thing that dribbled through. Seán Maas kept the score board ticking over with three well placed frees. Di Felice did what Di Felice does best and popped over two 65’s from distance. Brigids looked ragged and were delighted to get to the half time interval with only one goal conceded. The Dalkey men were well in control leading 1-11 to 1-4.

Cuala continued in a similar fashion after the break. Big Tom Sheehan was playing a captain’s part and patrolled the centre forward spot like a shark waiting for prey. He stroked over 2 points. Brigids battled to get a foothold in the game but they only succeeded in irritating the Dalkey contingent. No-one was prepared for the onslaught that the Cuala lads were about to unleash. Conall Molumby began proceedings with an incredible individual goal which stretched the Brigid’s net almost out to the M50. A clever ball from Emmet Murphy set up Mikey Wylde for a classy point. Wylde followed this with a rasper that hit the crossbar and scorched the paint off the black-spot. Murphy pounced on a ball in the square and finished it clinically to the corner of the net. Molumby then took his turn and connected with a ball in the air to score his second of the evening. Murphy wasn’t impressed. Not to be outdone, he followed suit with an ambitious effort which found its way to the Brigid’s net. In typical Brigid’s fashion, the Northsiders fought to the end, but any real opportunity was snuffed out by the brilliant efforts of Peter McKeown and his full back line. The game ended in a convincing win for the Cuala men on a scoreline of 5-14 to 1-4. With the points in the bag and their evening’s work done, the Cuala boys headed south across the Liffey with the prospect of a League final foremost in their minds.

Footnote: Both Cuala and Rialto Gaels with all 7 games played have 11 points each, but critically Cuala have a better score difference of +37 to Rialto’s +13. The County Board have yet to decide if Cuala take the honours, or if there will be a top two play off to decide the League.