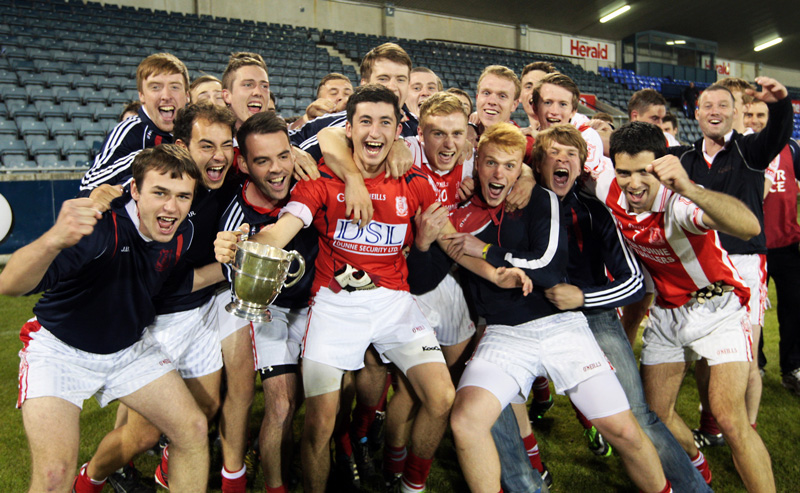 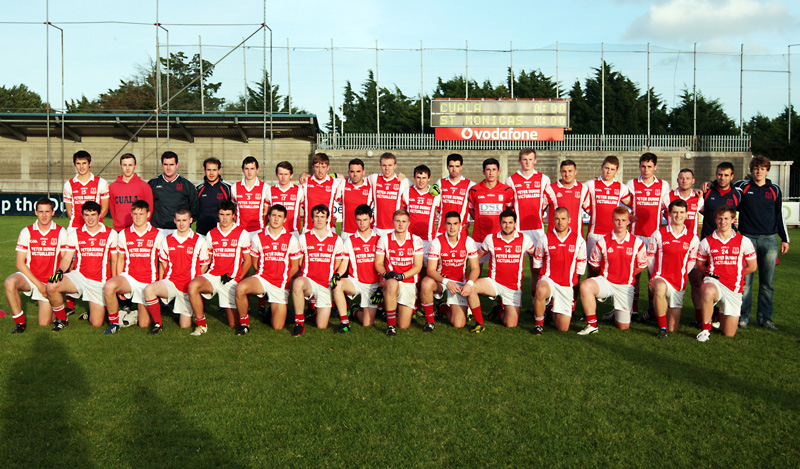 There was emotional scenes on Saturday night as Enda McGowan steered Cuala to the Junior championship. Starting as rank outsiders against a team 3 leagues higher than them, Cuala shocked the Dublin club scene with a display of pace and quality that blew St Monica’s away.  The night didn’t get off to the greatest start when Kevin Killion had to withdraw from the warm up with an ankle injury but Cuala were able to call on Dublin minor Martin Cahalane  into the line up. 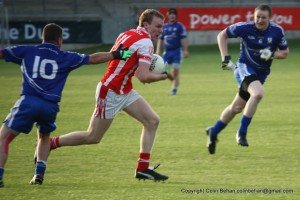 Cuala started brightly with the Sheanon twins causing problems and the powerful Colm Cronin clipping a few early points Cuala lead 3-1 after 10 minutes. But Monica’s found their man with an excellent long ball and Big Vinnie caught, turned and nailed a point. Another couple of Monica’s frees and Cuala were behind 3-4 but Cuala pressed the surge button , classy points from captain Colm Murphy , Colm Cronin and then the pick of the bunch from Cillian Sheanon meant Cuala lead 7-5 at halftime.

With the wind now in Monica’s favour Cuala knew they were up against it and their cause wasn’t helped when Colm Cronin didn’t appear for the second half due to a hamstring injury. But all of those fears were quickly banished when a fine Cuala move saw Dylan Kennedy finish to the net and Cuala were now 5 points to the good. Monica’s stayed in touch with some fine free taking but Cuala had an ice cool free taker in Paul James who kept Monica’s at arms length.

As the game entered the final 10 mins Cuala were 5 points up but it was soon to be 8 after the move of the match. Cathal O’ Giollain won a fine break in the middle of the park and set off on a pacy run at the heart of the Mon’s defense with corner back Martin Cahalane on his shoulder, as the last defender approached COG slipped the ball to Cahalane who crashed the ball to the net. Cuala were now on fire and a couple of lovely Paul James points saw Cuala nine up entering the final 5 minutes. There was a few nervy moments after the impressive Vinny Murphy crashed a shot to the net and then won a penalty, but that was blasted over the bar. It was too late for the gallant Monica’s team as Cuala saw out the final moments to win impressively 2-14 to 1-12. 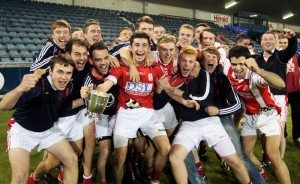 What an impressive display it was by Cuala, they scored 2-13 from play and had 8 different scorers from play. Cuala now re-enter the intermediate championship only 10 months after winning it and moving up to senior. It has been a fantastic run for Enda McGowan who has won 2 Adult championships, winning 10 games in a row in less than a year.

Speaking after the final Enda was at pains to point out that the success was down to the team and the support he had received from the club. A lot of thanks were directed towards our fantastic Juvenile section, with 11 of the starting 15 under 21 it doesn’t take a genius to work out how this championship was won. Plus the support Enda and his team had received from the football forum and in particular from the first team management who helped the Junior team all the way. And Finally Enda thanked the fantastic support he had received from Cuala folk , they had turned out in their droves to support the team and Saturday night was no different.

More pictures , courtesy of  Ray Cullen,  in the Cuala Gallery

Brothers Cillian and Colm Sheanon celebrate with Nephew Leo and of course the Junior Championship trophy on the Parnell Park pitch after Saturday’s night fantastic win.

Back to school, back to Cuala – Academy registration on Sat 7 Septemb...
Scroll to top