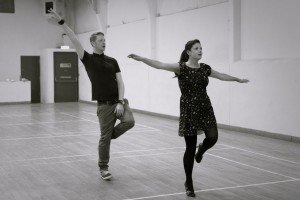 The countdown is on, the smell of the grease paint is filling the nostrils, the hair is being coiffured, the glam rags are being pressed and I hear the ladies are getting dollied up as well. Pressure is on in the Local Hairdressers and Nail Bars for the 3pm time slot on Saturday, never before have so many needed to rely on the services of so few, at the same time!

The 6th June 1944 was remembered for D Day, the D stood for Day, on the 2nd March 2013 another D Day takes place, the D stands for Dance. The final days to the main event, Not Strictly Dancing, are here and the atmosphere is electric.

Poor Tanis, her nerves are frayed, if the hall is not back in one piece by Monday there will be hell to pay with Derek and the badminton crew. Her partner Eamon is frantically trying to arrange the 1999 B game for Saturday morning so he can get to see the game as well as competing in the evening.

Dylan is under huge pressure to attend the adult football training sessions, as he is peaking for Not Strictly and his football coaches are worried he will be exhausted for the 2013 Championship. While his partner Ger has been seen performing the Rumba around the Laboratories of St Michaels.

Donal Murphy has now qualified as a full time dance instructor and is coaching U9, 10, 11 and over 50’s in his spare time, he is driving his partner Mary demented about the right way and wrong way to Chasse across the floor.

Damian took to the bed over the weekend, he said he had a cold but Natasha says he is only resting up.

Lisa and Shane are having sneaky private dance practice at all hours of the morning, I didn’t know people got up that early.

Peader says he wants Nuala home to cook his dinner and give up this auld malarkey, while her partner Jimmy is beginning to wonder why he settled in Dalkey in the first place.

Mary and Jack are still as cool as cucumbers and are expected to be the dark horses on the night..

Bláthnaid and John are giving up the day job and will be soon touring with Bruce Forsyth and the other Strictly Dancing Crew.

Michael flew in, from God knows where this time, to strut his stuff with Lorraine and is building up his muscles for the big finish.

Barbara is thinking of retiring from the Medical Profession and taking up a career as a fashion consultant specializing in lost causes like the partner she has.

Dayo broke a nail this week during practice but is on the road to recovery and should be able to tog out. His dance partner, Jennifer, is reaching the pinnacle of an intensive training programme which should see her peak on the night of the 9th March, maybe someone should tell her.

If it gets any more tense something will snap.

The Big Band is ready to perform and the Dancers are itching to go. The Cuala Hall is about to be transformed for what is shaping up to be a fantastic evening on the Cuala Family Calendar, you would be crazy to miss it.

Door open at 7.00pm and the Dancers will take to the floor at 8.00pm sharp so don’t be late. Dancing will continue on after the Not Strictly Dancing so bring you own Dancing Shoes.

Some tickets still available from Gerry Byrne at gerrybyrne@biosciences.ie or on 0868241692