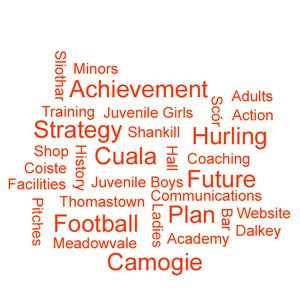 A packed room of Cuala devotees in Fitzpatrick’s Castle Hotel, made an important contribution to the development of the Club on Fri 2 March.  They were all there to deliberate on the formulation of Club Strategy – a framework of ambitions and plans that will guide Cuala’s long-term development.  The workshop was led by an external facilitator Wayne Byrne of Biocore Environmental (pictured with Chairman Peadar McAdam & Juvenile Chairman Declan Murray).  Attendees were given the task of identifying key issues facing the club under 6 headings –

The output from the session – containing some really sound proposals –  is to be compiled and reviewed by Coiste and will then be developed into a series of “SMART” (specific, measureable, achieveable, realistic,tangible) delivery plans.

Watch this space – Cuala is going to need you.

In anticipation of the hard work that lies ahead, attendees were treated to a nice surprise for their efforts on the night when our hosts, Fitzpatrick’s, distributed complimentary passes to their top-class Leisure Club.  Well done Cormac O’Sullivan, Leisure Club Manager