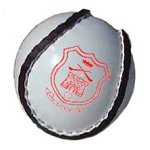 A scintillating 3 goals and 2 points from wonder-striker Stevie McDonnell was the highlight of this Division 1 U15 hurling game in wet and windy conditions in Lucan Sarsfields pitch at 12th Lock. Cuala were rampant in the second half and put Lucan to the sword scoring 3-13 during that period. Fionn Myers, his ‘partner-in-crime’ in the other corner, helped himself to 1-3.

Cuala won the toss and opted to play against the wind which was considerable right the way through the game. With the aid of the breeze, Lucan struck three unanswered points, two from frees, and with their centre-back dominating and sweeping up everything across the middle, the omens were not good for the Dalkeymen. On 14 minutes however, good work down the right from O’Drisceoil led to a long ball driven high into Joe Mahony at full-forward. Joe pulled on the ball in the air and it deflected to McDonnell in the corner who batted it directly into the net. The Cuala line couldn’t believe they were level after the first quarter, particularly after conceding a lot in open play to their Lucan opponents. Lucan continued to dominate and Cuala were fighting a rear-guard action such was the strength of the wind. The Cuala full-back line and keeper were well on their game however, and didn’t concede a goal despite Lucan creating a number of chances up front. ‘Dowser’ at centre back and the Lucan centre-forward were pulling frees off the Cuala half-backs as Cuala never conceded an inch. James Murphy, Jack Hartnett and Cathal O’Floinn were battling as if their lives depended on it. On the few occasions when Cuala succeeded in getting up field, their forwards were cleverly getting first to the ball and drew a couple of frees which Emmet Murphy converted.  The half-time score was 1-2 to 0-8 in favour of the ‘green-and-whites’.

Within two minutes of the re-start, Myers moved onto a deflected ball in front of Mahony at full-forward and crashed the ball to the net from 20 metres. The Lucan keeper was having difficulty with his puck-outs and Myers’ corner back had to go in to strike the puck-outs leaving Myers free in the centre. He took another point before he was marked again. Cuala were now laying siege to the Lucan defence. The Lucan puck-outs were only landing on the Cuala half–forward line, and Murphy, Hartnett and O’Floinn were driving every ball low, into the lethal inside line. Something had to give! On 12 minutes McDonnell pounced on a ball from a poor Lucan clearance, saw the keeper was not at home, and buried the ball into the back of the net. Cuala were now 3-6 to 0-9 ahead and everyone in a red-and-white shirt was fighting to get on the ball. The Cuala rear-guard were largely redundant now as all the play was in the Lucan end. McDonnell, Myers and O’Floinn popped over points and, as Lucan began to get more ragged, Murphy put away the resulting frees. The game was all but over when McDonnell raced through on goal to claim his hat-trick. With 6 minutes to go, corner-back ‘Laces Lane’ pounced on a loose ball soloed up the right and clipped a lovely point over from 40 metres and was pulled ashore for his trouble! Murphy finished out the game with a brace of frees as the referee brought proceedings to a halt.

Footnote: Another solid, workman-like performance from this talented Cuala team. They hunt down their opponents to create ‘turn-overs’ and have the individual skills to take scores when given the chance. The team is growing in confidence and play a style of hurling that is hard to beat. There are no heroes on the team, everyone gets on with his own job and does it very, very well.

Next up: Clontarf at home on Thursday 16th, 19.30 in Thomastown Park; Faughs in Thomastown Tuesday 21st May, 19.30. Win these two, and the team gets into the play-offs for the league.

99 Boys back in Féile action
Scroll to top