After an epic All-Ireland final played out over two gripping games, Cuala and Na Piarsaigh are the dominant forces on the inaugural AIB GAA Club Players’ Awards in hurling.

The new initiative sees an overall team of outstanding performers at the provincial and All-Ireland stages being recognised for the first time, and was selected by a cross section of GAA media.

In a season that saw Cuala successfully retain their All-Ireland club title, Dublin champions Cuala have six players on the team.

Name: 1. Sean Brennan
County: Dublin
Club: Cuala
Main Position: Goalkeeper
Player’s standout moment of club championship: Strong under the high ball and possessed of a particularly long strike, Brennan can hit puck-outs huge distances which is a vital weapon in Cuala’s armoury. His accuracy also means he’s a great man to get the ball to a moving teammate. Cuala may have cruised through Leinster at times but whenever danger lurked, like a 36th minute penalty to Kilcormac Killoughey in the provincial final, he stretched brilliantly to divert Ciaran Slevin’s strike out for a 65. 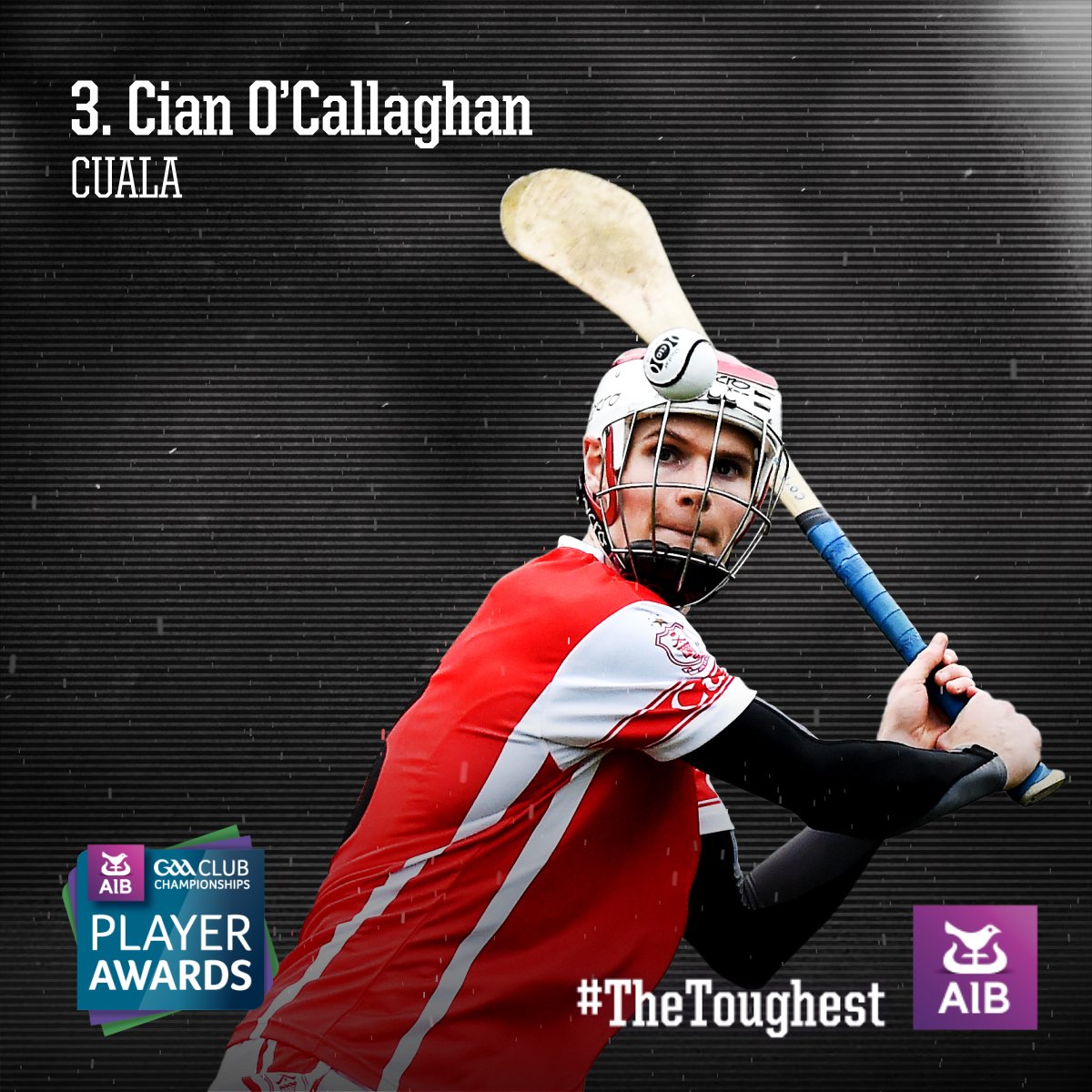 Name: 3. Cian O’Callaghan
County: Dublin
Club: Cuala
Main Position: Full-back
Player’s standout moment of club championship: He may not grab the headlines as spectacularly as his younger brother Con but Cian O’Callaghan is all that you want in a full-back; always totally unflabbable when covering in front of goal and rarely making an error under pressure. Faced with the might of Na Piarsaigh’s forwards he played a key man-marking role at times in the All-Ireland finals when the Limerick men rotated their powerful attack, especially helping to hold Kevin Downes to just 0-2 in the replay. 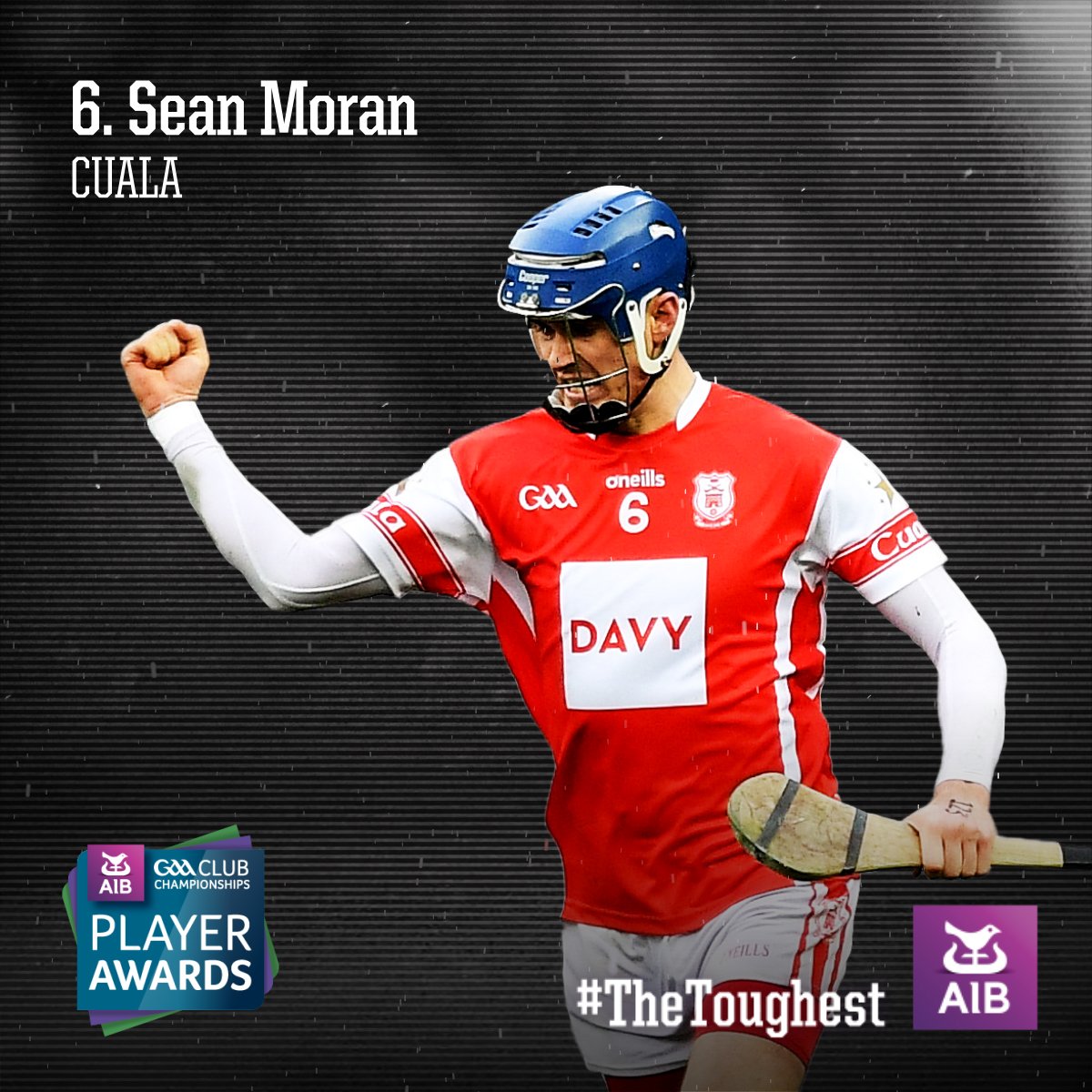 Name: 6. Sean Moran
County: Dublin
Club: Cuala
Main Position: Centre-back
Total scored in provincial and All-Ireland series: 1-0 (penalty)
Player’s standout moment of club championship: Moran will always be remember as the centre-back who goaled that 20m free in the 64th minute of the drawn All-Ireland final to complete Cuala’s four-point injury-time comeback but his powerful centre-back role throughout the campaign was brilliant. It culminated with Man of the Match in the All-Ireland final replay but who could forget that magnificent hook on David Breen when he was bearing down on goal in the drawn final. 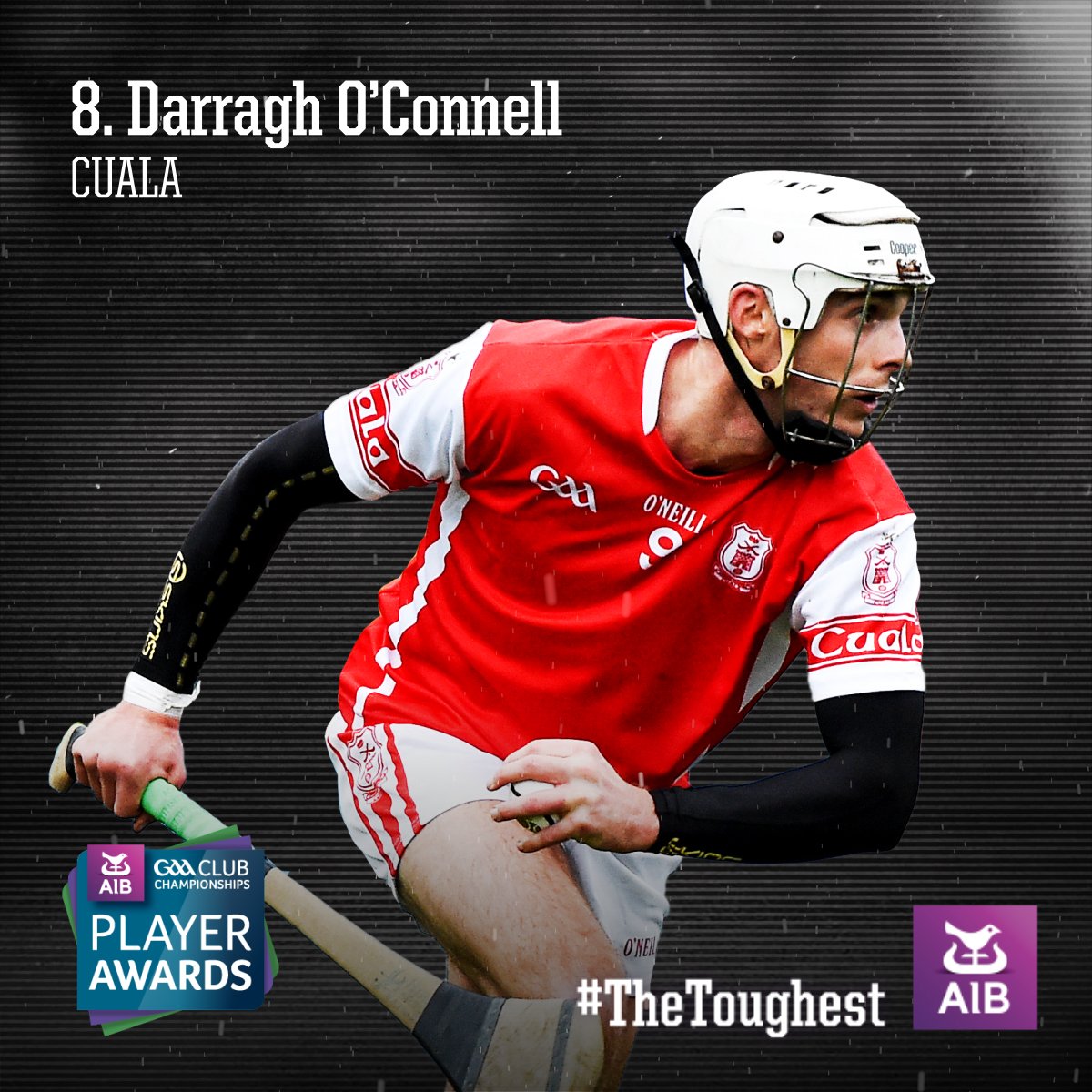 Name: 8. Darragh O’Connell
County: Kerry
Club: Cuala
Main Position: Midfield
Total scored in provincial and All-Ireland series: 0-6 (1f)
Player’s standout moment of club championship: The versatile Kerryman usually lines out in midfield yet still chipped in with scores in five of Cuala’s six games and proved himself particularly versatile in this campaign, often at wing-back. In the replayed All-Ireland final, when Adrian Breen was running riot on Cuala’s defence, he shifted back to help do a vital marking job at corner-back but not before he got one of his trademark points in the first half; a sensational catch inside his own half followed by a mazy run down the left wing and finished with a beautiful angled point straight off the bas. 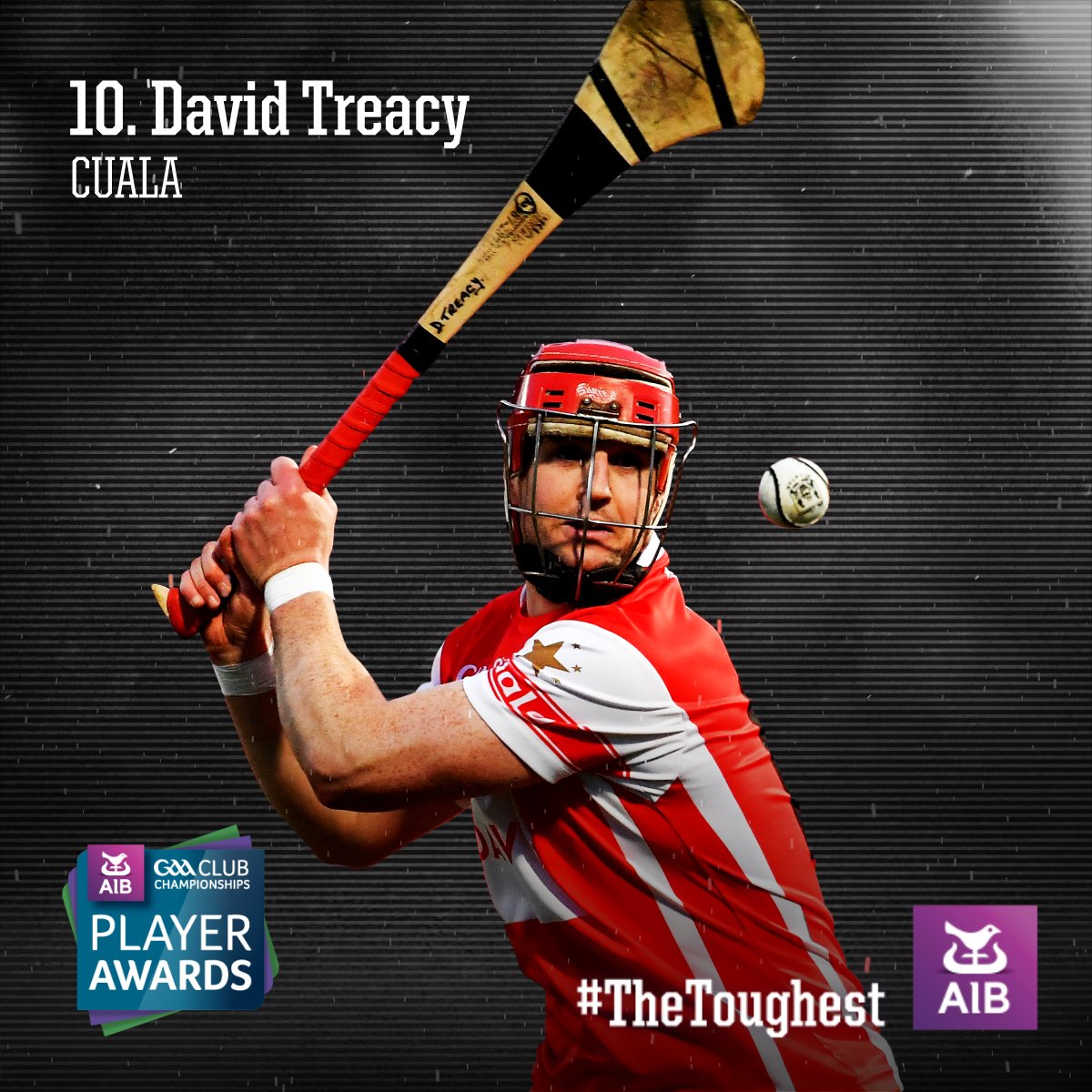 Name: 10. David Treacy
County: Dublin
Club: Cuala
Main Position: Right half-forward
Total scored in provincial and All-Ireland series: 0-53 (44f, 4 65s)
Player’s standout moment of club championship: The championship’s topscorer has long been regarded as ‘Mr Dependable’ for Cuala and Dublin, especially with placed balls and was particularly invaluable and metronomic this season. Six points was actually his lowest score in Cuala’s run to All-Ireland glory. His ’12 from 12′ frees in baltic, windy conditions in the drawn All-Ireland final caught the spotlight yet it was his combative leadership, layoffs and assists that day to help the Dubliners repeatedly fight back from deficits that day was even more impressive than his masterclass in free-taking. 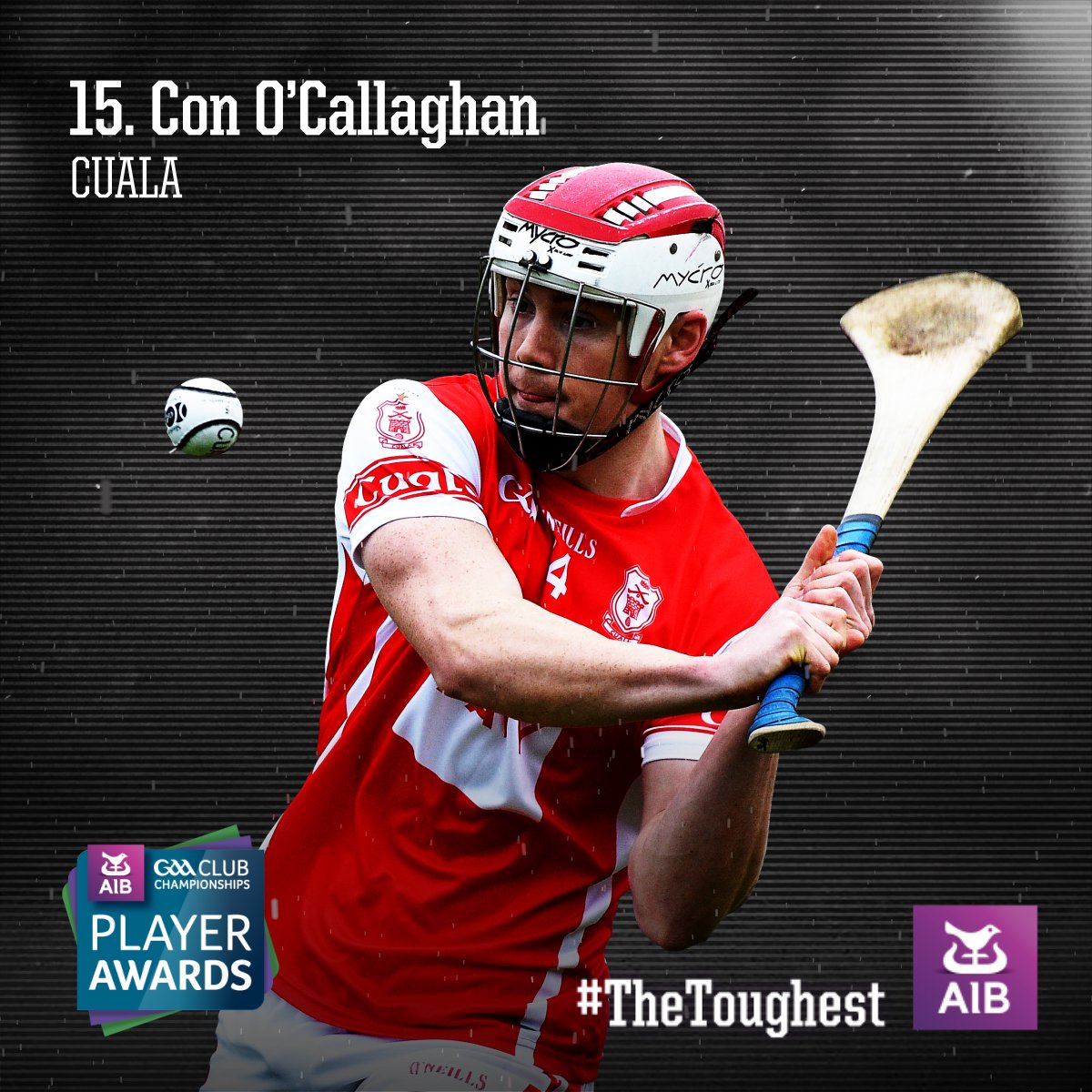 Player’s standout moment of club championship: The second of the O’Callaghan brothers to be included had a phenomenal 12 months that included winning two club All-Irelands with Cuala as well as a senior football All-Ireland, Allstar and Young Player of the Year with Dublin. His 3-15 in the provincial and club series with Cuala all came from play and his scoring rate only abated in the All-Ireland finals when Na Piarsaigh double and triple-teamed him. In the dying minutes of the replayed final, with the game still in the melting pot, O’Callaghan showed his class by bagging one vital point and winning a free as they inched clear. His other highlights this season came against St Martins – three points in 90 seconds before setting up a Colm Cronin and then his own beautifully bounced goal – and that tour de force against Liam Mellows when he scored three points with his first four touches and won a free with his fifth.

Uachtarán Cumann Luthchleas Gael John Horan congratulated all the winners and said: “The AIB GAA Club Hurling Championship was yet again a competition of real quality and produced a final that will live long in the memory.

“Our Association is built on our pride in the place we call home.  It’s what motivates players to perform such heroics for the honour of the area they represent be it a big town or a little village. It’s what encourages people to play and inspires others to volunteer in our clubs.

“It’s a great honour for all of those players who have been selected – especially with this being the inaugural year of these awards – and I congratulate them all.

“The AIB GAA Club Championships continue to grow from strength to strength and these awards are a reflection of that, and it’s something the whole club can share in and celebrate.”

Denis O’Callaghan, AIB’s Head of Retail Banking said: “AIB is very proud to celebrate its 27th year sponsoring the club championships and to partner with The GAA for the introduction of the AIB GAA Club Players’ Awards.

“Today, we are delighted to announce the AIB GAA Club Hurler’ awards, on the back of announcing the AIB GAA Footballer awards last week. To be named on the Club Hurler and Footballers awards is a real honour for these players, their families, counties, and clubs. They deserve recognition for their immense passion and commitment to their club throughout #TheToughest competition.”

Denis continued: “On behalf of AIB I would like to take this opportunity to congratulate each of the winners and to thank the national and regional sports media for taking the time to cast their votes and for their continued support for the AIB GAA Club Championships.”

The awards were presented at a function in Croke Park last Saturday night.

Cuala’s Seán Moran is the inaugural winner of the AIB GAA Club Hurler of the Year.

He was announced on Saturday night at an AIB GAA Club Players’ Awards banquet at Croke Park which honoured a team selected from outstanding club championship player performances in both codes.

Cuala’s Seán Moran had been picked at centre back on the hurling team and was honoured with the overall award in recognition of his immense leadership role in Cuala’s impressive defence of the AIB GAA All-Ireland club title.

The awards, which were voted on by a selection of GAA media, were presented by Uachtarán CLG John Horan, and Head of Retail Banking in AIB Denis O’Callaghan.

Busy time ahead for our Mens Footballers
Scroll to top