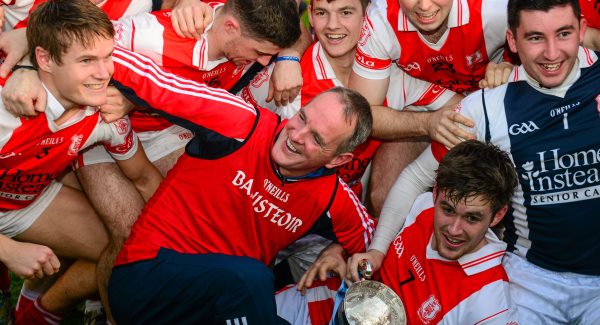 Congratulations to players and management as Cuala claimed their first Dublin Senior Hurling Championship title since 1994 after overcoming St Jude’s 3-14 to 0-13 in Parnell Park on last Saturday.  This win was a great team performance and was as a result of a lot of hard work, not only this year by Mattie Kenny and the entire management team but over a number of years at juvenile and academy level. Well done to everyone involved.

The win secured a meeting with Coolderry in the Leinster Club Hurling Championship quarter-final on Sunday next  8th November in Tullamore at 2pm and manager Mattie Kenny highlighted the importance of goals in securing the 10 point victory.

In his after match interview Mattie said: “The first-half was very competitive and the early goal gave us a bit of breathing space but St Jude’s are a very solid team and they kept on coming at us. “There was only a puck of a ball between the sides at half-time and although we won by 10 points in the end, the scoreboard didn’t really reflect how close Jude’s were to us.  “Goals win matches and we got the goals at the vital stages,” said Kenny.

In a tight opening, it was St Jude’s that settled the better thanks to frees by Wayne Hutchinson and Fionn Ó Riain Broin, with Cuala drawing level by the ninth minute following points by Sean Treacy and David Treacy.  A superb Paul Maguire point inched Jude’s in front two minutes later but, after surviving two near misses, their defence was eventually breached in the 19th minute as Sean Treacy improvised a clever finish following strong approach play by Mark Schutte.  David Treacy added a brace of points to push Cuala five points clear but successive scores from Joey McManus and Ronan Joyce trimmed the Jude’s deficit to 1-7 to 0-7 by half-time.

Further scores by Danny Sutcliffe and Jesse Kennedy within the first two minutes of the second-half added further momentum to the St Jude’s challenge but their comeback stalled as the tireless Colm Cronin gained reward for his efforts with a well-taken goal from Schutte’s pass.  The contest was effectively settled in the 48th minute as Cronin after a clever interception fed Sean Treacy, to score a goal and with Joey McManus from Jude’s red carded a minute later sealing St Judes’ fate, Cuala eased home thanks to three second-half points by midfielder Darragh O’Connell.

Highlights of the match are on Dubs TV as well as an interview with Mattie Kenny, Mark Schutte and Séan Treacy.

Thanks to all our supporters from Cuala from all sections who turned out in massive numbers last Saturday. And to Lorraine Hayes and Kevina Malone for the bar decorations and food in Hall afterwards. It was very welcome.

We hope to see everyone in Tullamore in Sunday.