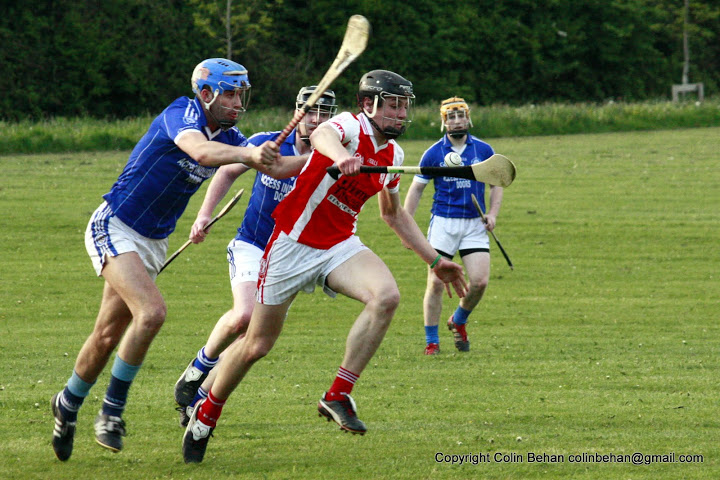 A hard-won, well-taken goal from  Brian Fitzgerald followed up immediately by a point from play, put paid to any chance of Crumlin holding on to the spoils in this Senior Hurling League game in ShanganaghPark.

Cuala’s slow start in the opening quarter saw the Dalkeymen behind 0-1 to 0-6 . Crumlin were running the show in most departments but it was difficult to determine how strong a factor the stiff breeze was to the game. John Sheanon began to assert himself at centre-back and Timlin took a tidy point from distance to bring some respectability to the score-line on 16 minutes, but a converted penalty in the 25th minute put the Crumlin side back on top. Barry Connolly and Ben Quinn swapped two frees each, and Cuala went into the interval in arrears, 0-5 to 1-10.

Cuala were much brighter in the second half and with the aid of the breeze, began to chip away at the Crumlin lead. The Cuala half-forward line of Connolly, Shane Walsh, who impressed in the centre, and Fitzgerald, slowly began to get the upper hand. Phelan and O’Brien stepped up a gear in mid-field, and Shaenan at centre back began to show his true pedigree to dominate at centre-back. Butler was solid in nets and the Browne brothers snuffed out any sign of resistance at the back. In the opening 10 minutes of the half, Connolly, Fitzgerald and O’Brien between them scored 5 unanswered points and the Crumlin line were beginning to get anxious. By the end of the 3rd quarter Crumlin were still holding on with the score-line at 0-10 to 1-10, but the signs were ominous for the Blues. Breezer’s goal for Cuala on 51 minutes was the turning point. He took a pass out on the side-line and began his journey goalwards. His pace took him by two defenders, but it was his determination and physicality that brought him into the red-zone. Though under heavy assault, he unleashed a shot which beat the Crumlin keeper and nestled in the back of the net. 2 minutes later he clipped over another fine score and Waldren stepped in to level the match. Cuala were now totally dominant in most positions and the game began to open up. Paul Butler, O’Brien and Phelan added two more points and Crumlin were living off scraps. The referee brought proceedings to a halt on a final score of 1-16 to 1-14 in favour of Cuala. A barn-storming second half from the red-and-whites! The Crumlin team exited the gates at the graveyard end scratching their heads and wondering how they got nothing for their efforts after such a strong start.

Footnote: The win for Cuala leaves them 5th in the Division 1 League Table on 4 points after 3 games, but only behind Vincents and O’Tooles on score difference. Boden lead on 6 points; Crumlin are now bottom of the Table with Brigids on 0 points.

Next up: Table-toppers Ballyboden St. Enda’s in Pairc Ui Murichu, Saturday 25 May, 6.30pm.