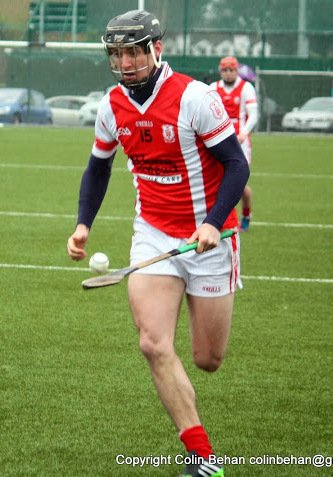 It wasn’t pretty. It was nail-biting at the end, but Cuala’s Senior Hurlers eventually saw off the determined challenge of St. Pat’s Palmerstown in this tough, uncompromising encounter played in perfect conditions in Bray. Pat’s belied their lowly standing in AHL1 and came out with fire and passion to challenge the talented Cuala team. Every time Cuala seemed to pull away during the game, Pat’s hauled them back. And so it was until the last puck of the game. Everyone on the Cuala line was relieved to hear Dave Donovan call a halt to proceedings.

On 3 minutes, Sean Treacy was downed and Connolly slotted the resulting free. Mark Schutte seemed to be everywhere. He took on his man, turned for goal and released a rasper. The keeper deflected it for a Connolly ’65. Kyle Braine in the right corner got onto another, again the strength of the keeper’s hurl was tested. Pat’s responded with two points from their lively 13. Schutte again robbed possession, this time down the right, and took his point. The game was hard and earnest, both sides were up for it. There was no room for error and space was at a premium. Cuala seemed to be settling better and getting into the groove, but not for long. The Pat’s 13 hit a drive goal-ward, keeper O’Braináin caught the ball and moved forward off his line. The full-forward grabbed his hurl and O’Braináin tried to kick the sliothar clear. Donovan blew, but pointed goal-ward, he awarded a ‘20m free against him for over carrying. Harsh! Stapleton blasted to the net, 0-3 to 1-2. Cuala began to build again, Treacy was downed again and Connolly converted, Colm Sheanan threw a lovely pass to Paul Butler and he converted. Braine hit another at goal and Connolly hit the resulting ’65. Oisin Gough, Niall Carty and Simon Timlin were beginning to assert themselves in the half-back line but there was fierce resistance. Pat’s hadn’t read the script.  A great move down the left exposed the Cuala goal. The pass across to the waiting full-forward was intercepted by Sean Barron on his way back to goal and cleared. He injured himself in the process and Niall O’Dowd replaced him. A lovely move involving Gough, Paul Schutte and Butler again tested the keeper. Connolly converted the ’65.  O’Dowd stopped another goal chance with a timely intervention. Cuala were 0-8 to 1-4 up at the interval.

Colm Cronin and Adam Hudson appeared after the break.  Cuala’s eagerness to win possession and Pat’s determination gave the Palmerstown outfit four points in as many minutes, 3 from the placed ball. Cuala re-grouped. Bobby Browne came on for Seán Treacy in the middle. Connolly hit two frees and Cuala were back in the ascendency 0-12 to 1-8 with 10 minutes gone. David Treacy was sprung from the bench and was a game-changer. Carty hit him with a pass for his first from out the country. Waldren took a pass from Mark Schutte who again went for goal, but the door was closed. Sheanan took a pass from a Timlin free and converted, David Treacy was fouled and Connolly converted. Again the lively Treacy won possession on the right. He pinged a pass to Mark Schutte out on the left and he powered over his third. From the puck-out, Carty fed Treacy again down the right, he outpaced his chasers and put over his second. Browne hit Cronin and he converted. Pat’s hadn’t troubled the score-board for 12 minutes and the game was moving away from them, 0-16 to 1-10. But they owned the last 5 minutes. A mix-up on a side-line ball gave Pat’s a free from 50m, the ball was cleared but a resultant free from 40m was played low and fast, and found its way directly to the Cuala net. The game was back in the melting pot. Again Carty found Treacy on the right and he converted his third in 20 minutes. Liam Rushe at centre back for Pat’s started to assert himself, in those final minutes he won a lot of possession and fed his half-forward line. Two wides from distance frustrated the Palmerstown line. A Pat’s sideline from 30m on the left went harmlessly wide. With the game opening up, the Pat’s full-forward went waltzing through the Cuala attack with Rob Ried and Timlin in tow. He kicked the ball – wide. Cuala were anything but comfortable. Donovan played on. Now into injury-time, Pat’s won another one outfield and dropped the ball in. Suddenly two Pat’s forwards were in on goal with only Rob Reid and the keeper minding the house. O’Braináin stood tall, took the ball cleanly and Donovan blew. Whew, Cuala survived on a final score-line of 0-18 to 2-10.

Footnote:  With three games played, St. Judes lead the division on 6 points; Cuala, Crokes and O’Tooles are joint-second on 4.

Next Up: First round of the Senior Hurling Championship against Parnells.