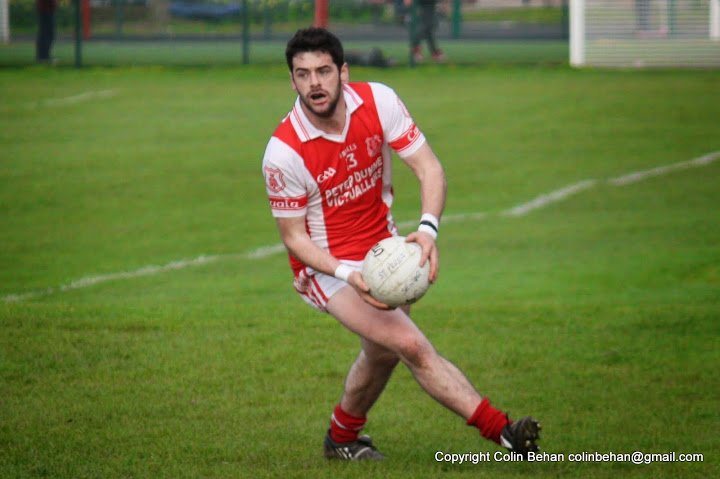 A large crowd gathered in Hyde Park to see previously unbeaten Cuala take on St. Peregrines who had beaten Cuala in a tight game in their last encounter. A strong breeze blew towards the town end and Cuala played with the elements in the first half. Colm Sheanon was causing the St. Peregrines defence all sorts of problems and Cuala raced into an early lead. Cuala were dominating exchanges with Michael Fitzsimons using his experience and composure to set up numerous opportunities, the pace of the youthful halfback line was also testing the Peregrines defence. Two events occurred to test the resolve of the home team, Matthew Clancy was forced to leave the field with a leg injury and James Power was replaced having received a black card. Cuala regrouped and led by ten points to four at half time.

Cuala started the second half strongly and a surging run by Martin Cahalin set up Paul James whose shot was well saved by the St. Peregrines keeper. Peregrines set up an attack almost immediately and scored a goal to reduce the Cuala lead to three points, game on! The rest of the game proved to be a tight affair with both teams going toe to toe. Ryan Scollard chipped in with some lovely points, Donal Lehman kept running and running and Fitzy and Colum Sheanon showed great leadership. The McKenna brothers Jack and Colman were battling hard in midfield and the defence held firm. The referee blew the final whistle and Cuala remain top of the table. The Management team will be happy with the battling performance, but we will have to learn to convert our goal chances in the stern tests that lie ahead.

Fogra:  Very good performance by Michael Fitzsimons who shows great commitment to the Club, but man of the match on this occasion goes to Colm Sheanon who was excellent throughout and scored eight points, well done Colm.

Fogra Speisialta:  The Bar Food went down a treat after the match, even the Referee joined us.